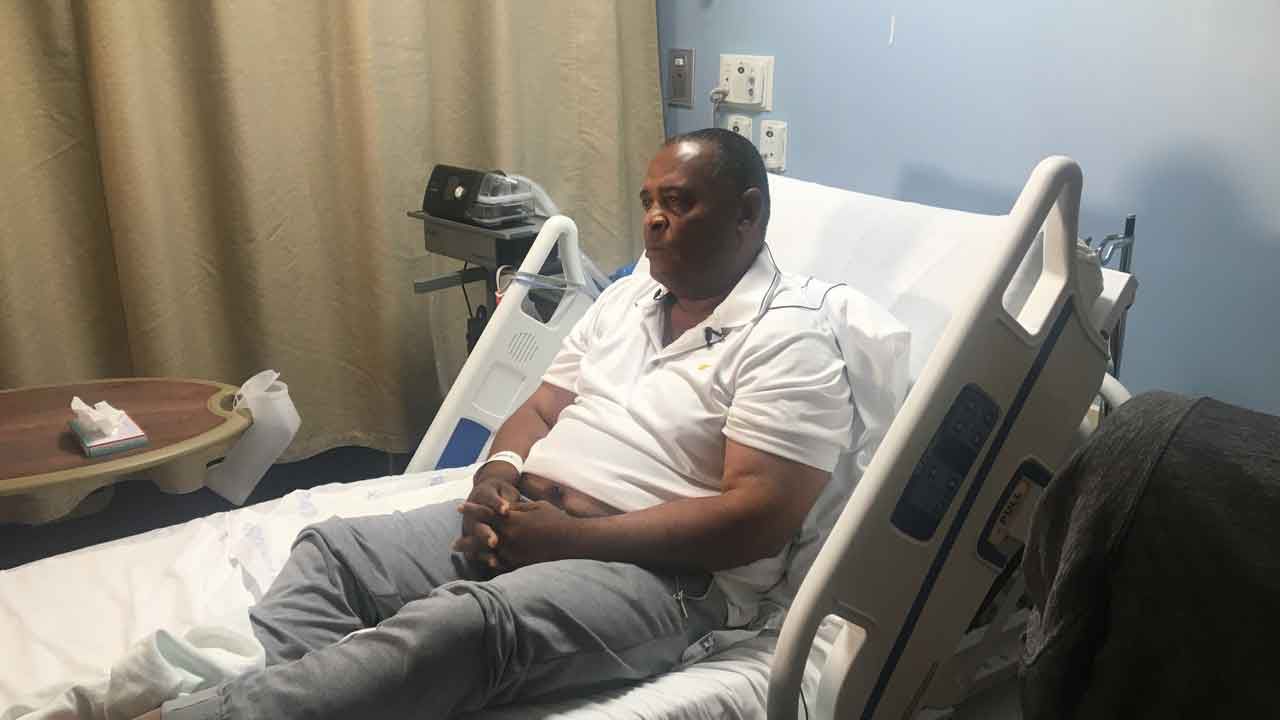 HART bus operator Schnaider Prophete, seen here in a hospital bed, was attacked while driving his regular route by a passenger on Tuesday, Nov. 19, 2019. The attacker, James Ambrose, attacked Prophete with mace and a box cutter, according to witnesses and Tampa Police. (Jorja Roman/Spectrum Bay News 9)

HART Bus Driver Recovering After Being Stabbed by Passenger

TAMPA, Fla. — The HART Operator who was brutally attacked earlier this week was released from the hospital on Thursday.

Schnaider Prophete was attacked by a man with a box cutter and mace on Tuesday. Tampa Police say James Ambrose is the man who attacked Prophete while he was on his daily route.

Prophete suffered injuries to his eyes from the mace. He has slashes across his chest, arms and legs.

“The scar on my mind. That’s the greatest one,” said Prophete.

Prophete credits one of the passengers, John Phelps, with saving his life. Phelps was riding the bus when Prophete was attacked.

He chased his attacker off the bus, then helped wipe the mace off Prophete’s face.

“He was there when I needed him the most,” said Prophete.

“I’ve seen a lot of stuff in my life, but I’ve never seen anything like that,” said Phelps.

Both men are veterans. They each said their training kicked in during the attack.

“Our job is never over, protecting the county, the citizens of this country. That’s our job,” said Phelps.

“God sent him that day to save my life,” said Prophete.

Prophete believes more safety measures need to be taken for HART bus drivers. He believes the buses without safety shields should not be in operation.

This latest incident comes after a HART bus driver was killed by a passenger in May.

A spokesperson for HART told us safety is a top priority and they’re ahead of schedule in installing the shields. Right now, at least 112 buses have them out of the 180 in the fleet.

All buses will have the shields installed by January 2020.

Ambrose remains in jail, charged with aggravated battery and aggravated assault with a deadly weapon.