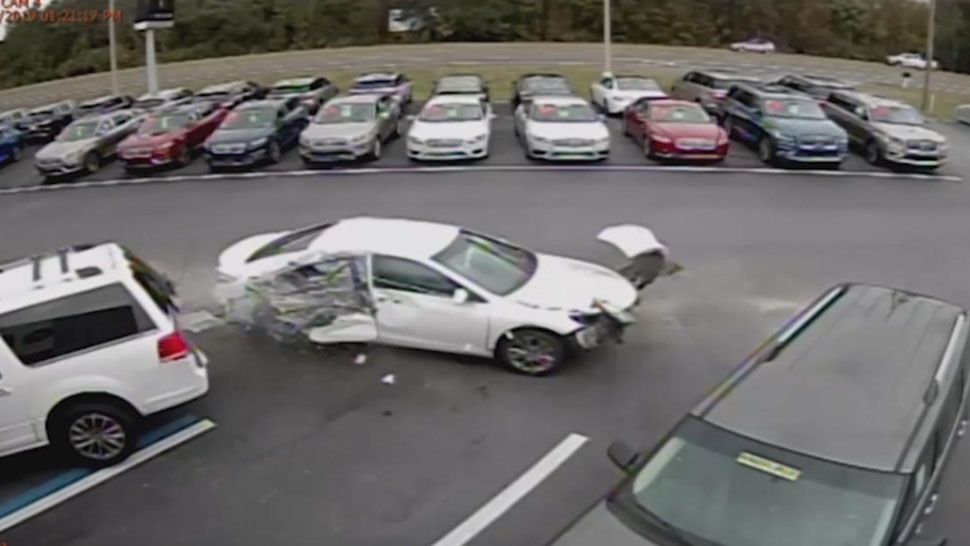 Jaw dropping surveillance footage from a Citrus County car dealership shows the moments a car flies into the air, over several vehicles, before making a crash landing. (Spectrum Bay News 9)

CITRUS COUNTY, Fla. — Jaw dropping surveillance footage from a Citrus County car dealership shows the moments a car flies into the air, over several vehicles, before making a crash landing.

Citrus County deputies say a driver traveling down U.S. 19 felt dizzy and lost control of his white Toyota Camry. The car veered into the grassy area of the road then over a berm before going airborne. That car traveled 139 feet through the air over a dozen vehicles without hitting any of them. Once the Camry hit the ground it smashed into two other parked cars.

Authorities said the driver was hospitalized but expected to be okay.

WATCH: Surveillance from Crystal Ford Lincoln in Citrus County shows a car flying through the air. The car lot was packed with customers when the Toyota Camry came flying through. Police said the driver, who wasn't hurt, had some type of medical emergency. pic.twitter.com/MiBajzdT5t

In the video the flying car barely misses an employee on the ground. Crystal Ford Lincoln Sales Manager Bruce Azevedo was just feet away from the crashing Camry when it finally made a crash landing.

“You could feel it. You could feel the, I don’t know, in your chest the compression when it hit,” he said. “And then as we spun around to see it, I saw it take out the navigator. Which if the navigator wasn’t there it probably would’ve went into the showroom.”

Azevedo said Crystal Ford Lincoln in Citrus County was crawling with customers when all of a sudden a car came flying through the air.

“I still can’t believe it. I mean he traveled 400 feet in the grass before he hit the berm and he literally went inches between an F-250 and another Ford was parked there,” he said. “This is something Evil Kenevil would’ve planned months and months to be able to do and you don’t understand it.”

Thankfully no one on the ground was hurt.