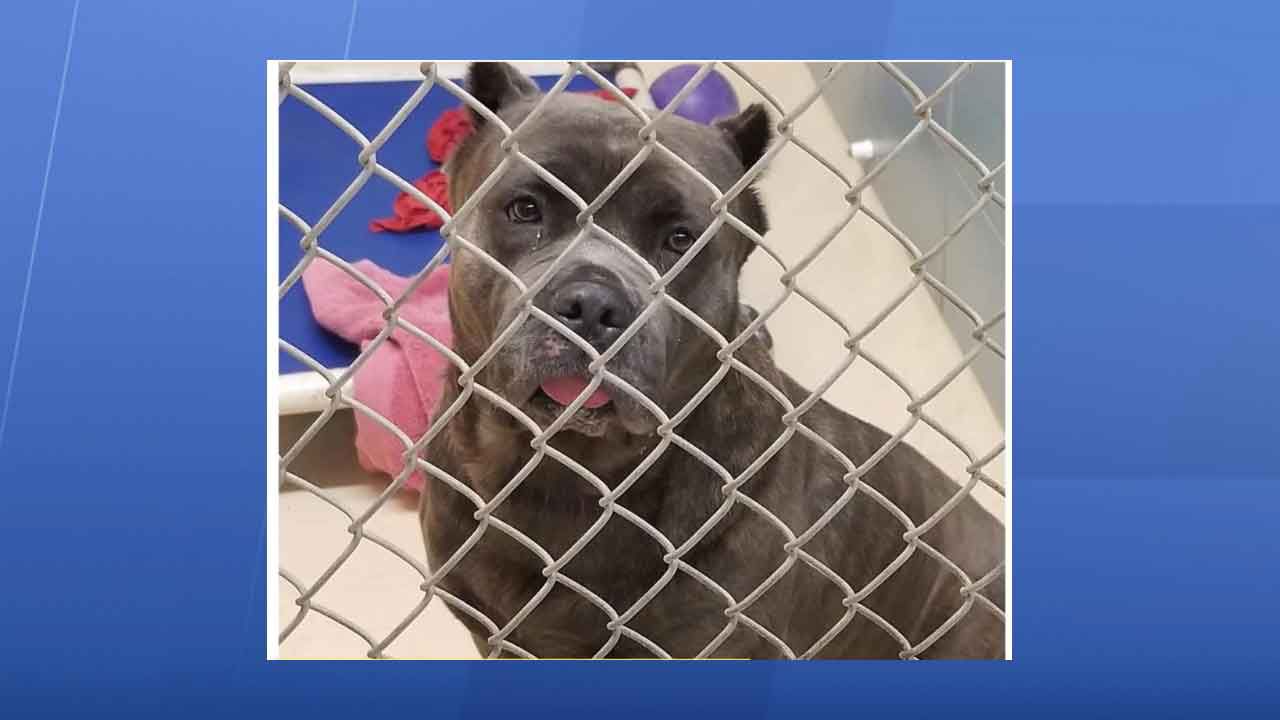 Jitterbug was abandoned for days but will soon have a new home, according to Hillsborough County Animal Services officials. (Courtesy: Rescue Me Tampa Shelter Dogs on Facebook)

Marianna Montague, a volunteer with Cane Corso Rescue, told us her ears perked up when she recently learned about a dog in trouble.

“They said this is what looks to be a Cane Corso. She’s been out on the lam in the same exact spot for 24 to 36 hours,” Montague explained. “Several people have stopped to try to get her to come into their car but she growled, barked, was somewhat charging and aggressive.”

When Montague went to try to rescue the dog on December 8, she found her tired, hungry, and in the middle of nowhere.

“The University of Florida, they have a research facility that’s about eight miles up in Wimauma,” said Montague. “So you go past orange groves and beef farms and 18-wheelers are flying down the road left and right and the dog was sitting in a median at the entrance to the University.”

Montague said it was short notice on a Sunday, so she took the dog to Hillsborough County Animal Services. That’s where she found out the big and seemingly healthy dog’s name is Jitterbug.

She said she also learned the identity of Jitterbug's owner: Tampa Bay Buccaneers defensive tackle Rakeem Nunez-Roches. In addition to being an NFL player, Nunez-Roches is a dog breeder, according to his website.

Hillsborough County officials confirmed Nunez-Roches was alerted that the dog was in the shelter. However, he never picked the dog up.

“I called on Tuesday and they said that he had responded back and that he would pick her up on Sunday, which I thought was odd because they played Detroit on Sunday and they had a 4:25 game, so how would he get back in time to pick her up at 7?” said Montague. “Was football more important? I don’t know. Maybe it is, but he should’ve re-homed her.”

County officials said Jitterbug has been pre-adopted and will soon go to her forever home. However, there’s still no word on how Jitterbug ended up on that secluded road all alone for days.

“I don’t know whether it got loose, whether they let it go, whether it was in boarding and it got loose, I don’t know,” Montague said. “All I know is it was on the lam for longer than it should’ve been in a place it shouldn’t have been and that it stayed at the shelter what, three weeks now?”

The Tampa Bay Buccaneers released this statement regarding the situation:

“We are aware of the issue regarding Rakeem Nunez-Roches and are in the process of gathering additional information. We will refrain from further comment until we have a better understanding of the situation.”