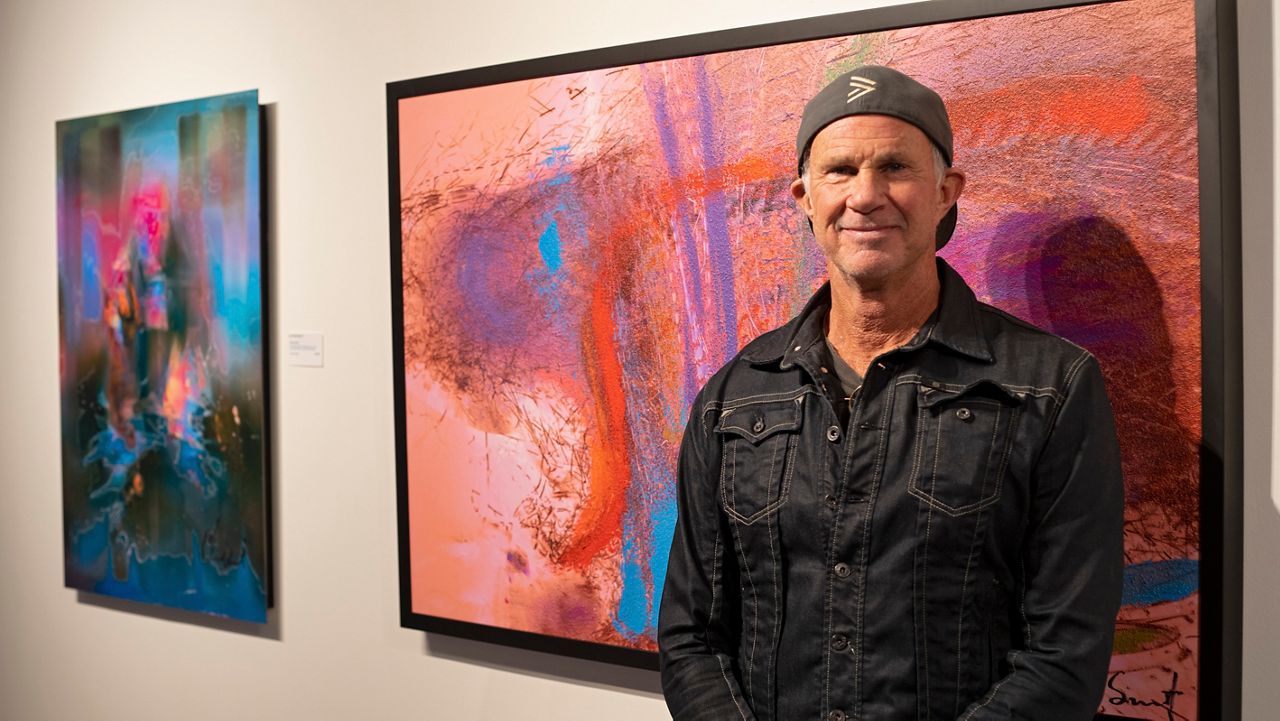 Photo of Chad Smith in front of his paintings at Russell Collection Fine Art Gallery on January 10, 2020 (Dawn Okoro/Spectrum News)

AUSTIN, Texas — Legendary Rock and Roll Hall of Famer Chad Smith is most well-known for his decades of drumming with the Red Hot Chili Peppers, but after recently tapping into a new form of expression, the 58-year-old is quickly becoming well-regarded in an entirely new arena.

"That’s me playing the drums - somewhere in that,” said Smith. Standing with Spectrum News Anchor Tara Petitt, Smith stared at a large canvas hanging on the wall at the Russell Collection of Fine Art. The piece he was talking about - along with 79 others hanging on the walls surrounding it - were all created by the drummer. His exhibit, "The Art of Chad Smith," wrapped up its United States premiere in Austin, Texas, on Sunday.

“The way that I want to interpret my feelings about playing the drums and playing music - I’m trying to put this in a different medium,” said Smith.

By experimenting with light, photography, print, and paint, Smith captures his own interpretation of what music is to him - visually. The process starts with Smith at his drum set in a dark room. While playing with lighted drumsticks, images of the artist are captured at variable shutter speeds. What's captured becomes the print on Smith's canvas, which he embellishes with paint, oil and other mediums. Considering he's regarded as one of the greatest and most sought-after drummers in the world, some may be surprised to learn about Smith's new "hobby," but for Smith, it carries a lot of meaning. 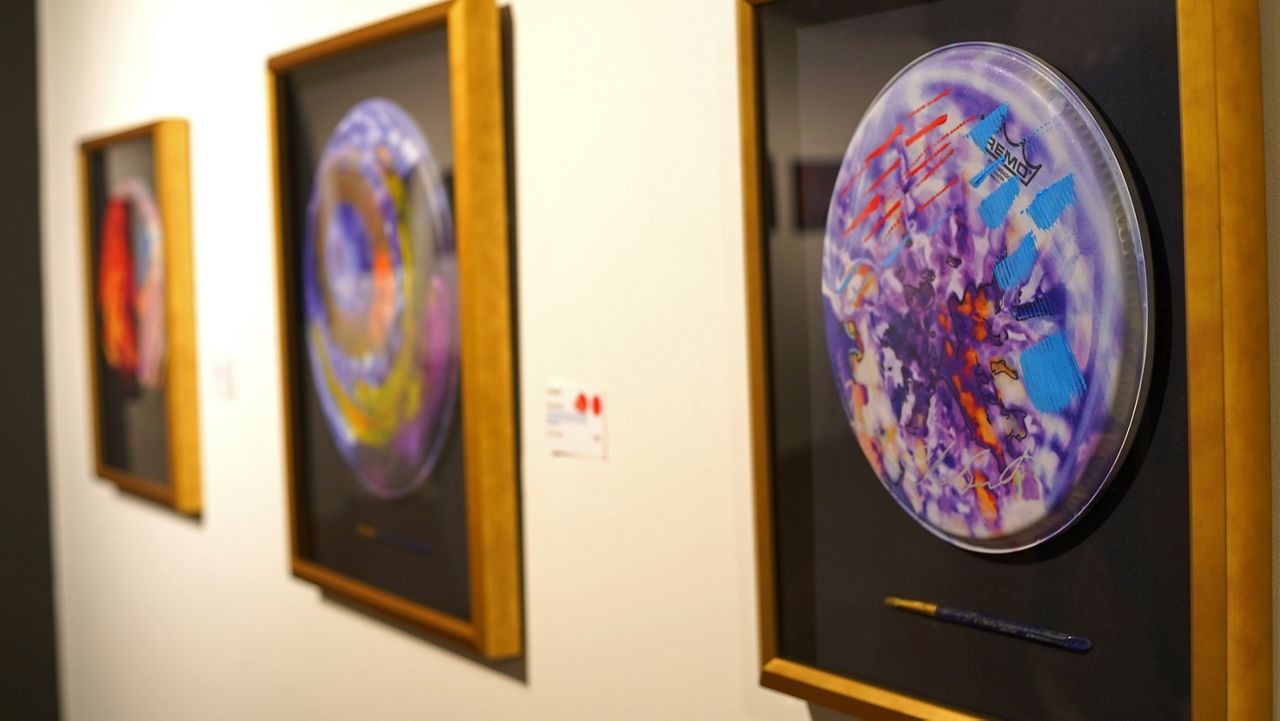 “I love to express myself in any sort of creative way that I can, and doing this is another way to kind of take chances and take a risk, and I like to do that. I think it’s important for any artist to do that- to keep trying new things. It’s not your normal medium, you know. It’s not like Bob Ross with an afro in front of the thing and painting,” laughed Smith.

“We would  watch you on Saturday mornings, though!” joked Petitt.

In addition to his North American fine art tour, Smith is also still touring with the Chili Peppers. The band will be performing a limited number of shows in 2020 to give them time to work on their new album. While the group has gone through some recent changes, it's safe to say Smith won't be calling it quits anytime soon.

“I found my passion at an early age, and I just... I love it - and I still love it. No one was like ‘Chad, you have to play the drums!’ It was more like ‘Please stop," Smith said.

Smith began playing when he was 7 years old. A lot of his talent was self-taught, but another factor he credits to his success is the opportunity he was given to play in school bands while growing up - something he never takes for granted.

“If I didn’t have music in school, I probably wouldn’t have stayed a musician. I wouldn’t have graduated high school! I know that,” said Smith. “I think it’s really important for kids to be exposed to music and musical instruments - and any kind of art.” After 51 years of drumming, you may think he would be ready to slow down, but the truth is actually the opposite.

“I just love to play, and I will play anywhere. I get such joy out of it,” said Smith. “You know, I’ve been in the Red Hot Chili Peppers for over 30 years. We’ve had a lot of ups and downs and different members come and go, but I’m probably more passionate about music now than I was like growing up or in my 20s or when first joining the band.”

Whether the six-time Grammy winner is playing the drums in front of 50,000 people or in a dark room with just a camera, one thing is certain: Chad Smith is using his mutual love of music and art to make the world a happier place.

“I’m a really, really lucky person,” said Smith. “I just - I love, love music, and you know- you travel around the world and it makes people so happy! It gives a lot of joy to people.”

Red Hot @ChiliPeppers drummer @RHCPchad and I have a lot in common. We both play the drums, we both value art in schools, and we both like to take our time on things. However, I think Chad has me beat on the *taking our time* part. At least he got it right😉#AustinMusic #drummers pic.twitter.com/5Ep6V7VCA9 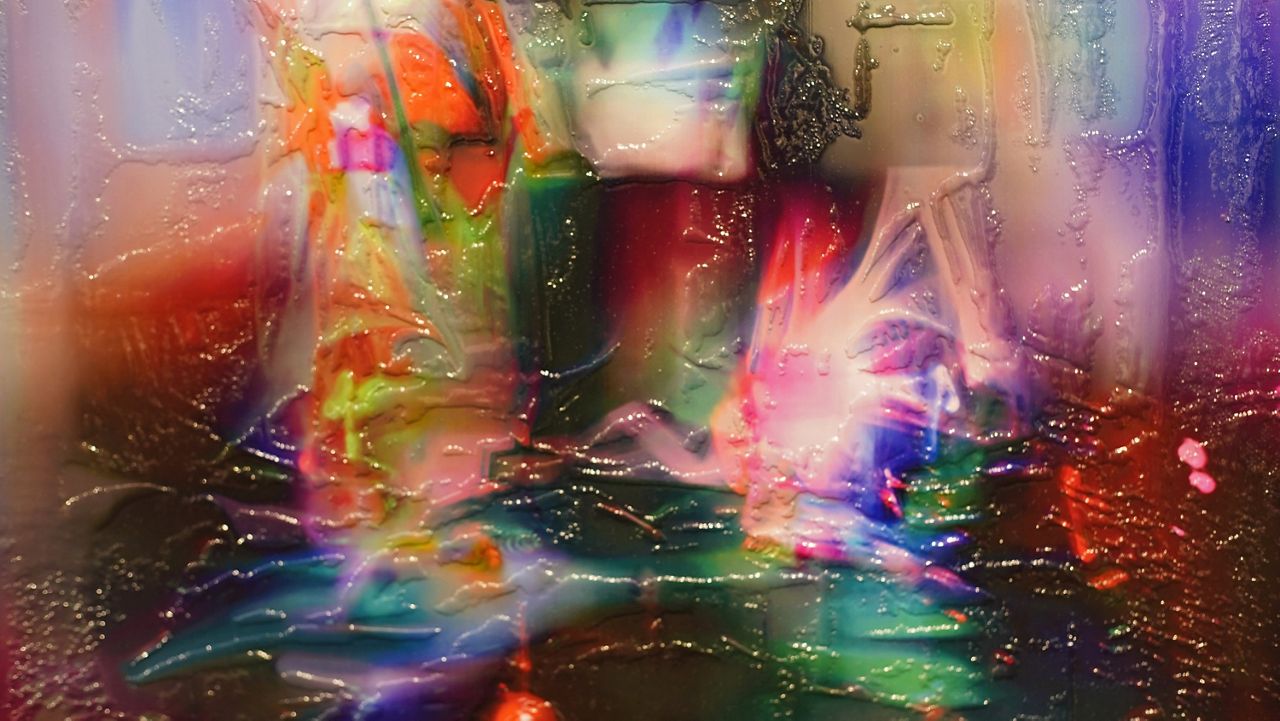