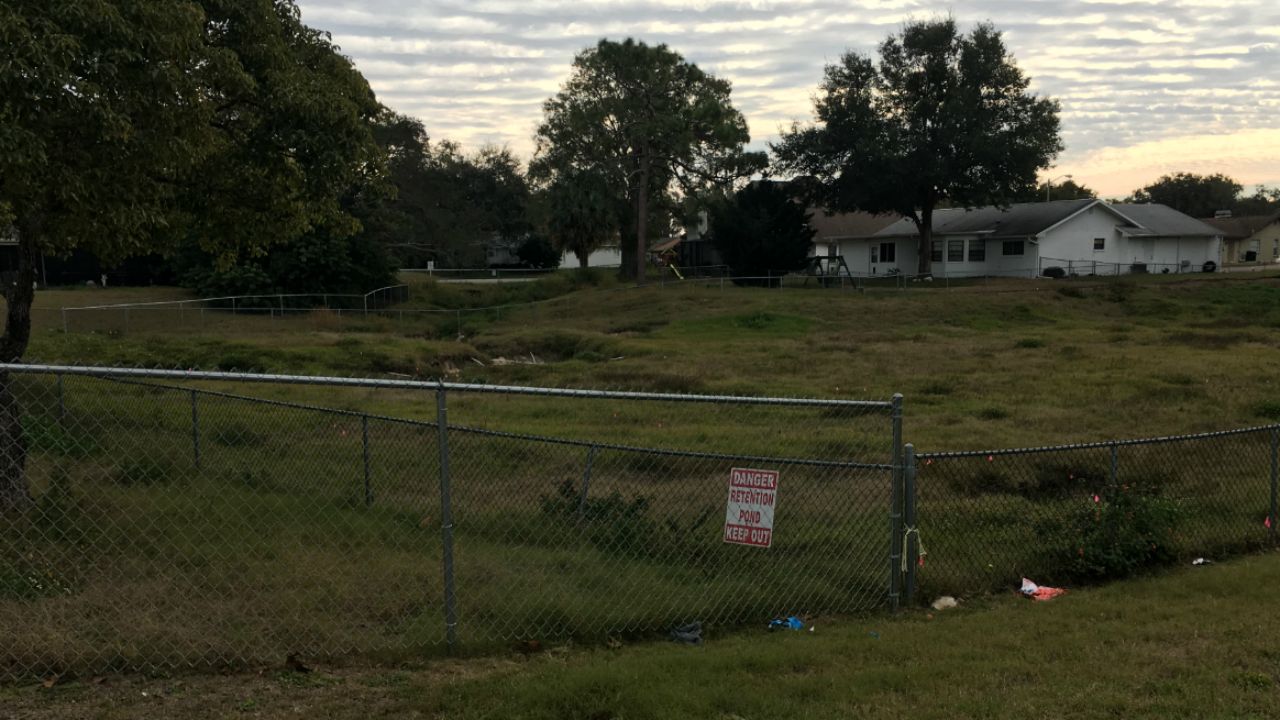 The county said 15 properties in the Lakeside Woodlands subdivision that include 14 homes could be eligible for the buyout. (Sarah Blazonis/Spectrum Bay News 9)

HUDSON, Fla. — Pasco County is looking into options that would allow it to offer buyouts to homeowners in the Hudson neighborhood affected by dozens of depressions that opened last summer.

Emergency Management Operations Manager Monica Santiago said currently, that involves applying for two FEMA grants that would allow the county to purchase some of the impacted homes for 75 percent of their total value.

"There are no guarantees in regards to these two grants. It's just another avenue to help them get out of their current situation and hopefully place them in a more safe and comfortable situation as they can't access their homes," Santiago said.

Homeowners would have to pay the remaining 25 percent to cover the cost of returning the property to its original state. A county spokesperson said that includes associated costs, like demolition, and that if Pasco is awarded the grants, a condition would be that no one could live on that property again. The county said 15 properties in the Lakeside Woodlands subdivision that include 14 homes could be eligible for the buyout.

"We're trying to make it an all-inclusive, 100 percent, the resident isn't impacted in anyway. But again, we're just grasping at straws at this point trying to get something to happen, get some wheels moving, so to speak," said Santiago.

Thomas Murray is one resident who said he's ready to see that movement.

Murray has lived in his home on Willow Brook Court for 38 years. His is one of six homes that sit between barricades blocking off the portion of the street that's been closed for months.

Murray said he's one of those considering the buyout.

. @Pasco_FL_OEM’s operations manager tells me the dept. is trying to find some sort of relief for people who live in the #Hudson neighborhood where 76 depressions opened last year. It plans to apply for @fema grants that would let county offer residents 75% buyout. @BN9 #bn9pasco pic.twitter.com/5m55d9RMMK

"Right now, I am because I don't have any other option. We're on a fixed income. I need something from my house so I can afford to either buy or rent something," he said.

Santiago said the county is looking for those other options. County officials have previously stated that the situation unfolding in Lakeside Woodlands is unprecedented in the state of Florida. According to Santiago, that's part of the challenge staff has faced when searching for funding opportunities.

"We look at flooding, we look at hurricane damage, anything along those lines," she said of typical reasons the county would pursue grants. "Because depressions are, so to speak, a new concept, even though Pasco County has experienced them a little bit more than other counties in recent years, we're using that as a leg up in regards to legislation to be able to show, 'Hey, this is a possibility. We will need, in the future, funding to be able to support this.'"

Santiago said the county is working towards setting the standard for a potential mitigation grant as it relates specifically to depressions. She also noted that four emergency management staff members are dedicated solely to mitigation. According to Santiago, this is a rarity for similar emergency departments in other parts of the state.

"That gives us an opportunity, a leg up on everybody else, to be able to dedicate ourselves to be able to acquire all the information and reach out to more grants as it relates to mitigation to be able to help our community," Santiago said.

"We have to have a certain amount of faith within the county, but at the same time, sometimes it just doesn't seem fair that we're not getting a fair deal," said Murray.

Residents are expected to remain in limbo for the foreseeable future. Santiago said once grant applications are submitted, it could be two-to-four years before the county learn if it's been awarded the grants.

"You work hard all your life. You pay off your home. You're in retirement," said Murray. "We're supposed to be in our golden years. We're supposed to travel and visit our granddaughter and so on. Everything's on hold right now. We don't feel that we should make any major investments for a house that, at some point, is going to be torn down."

A county spokesperson said 12 residents have signed consent forms to allow staff to begin collecting the information needed to put together its applications.