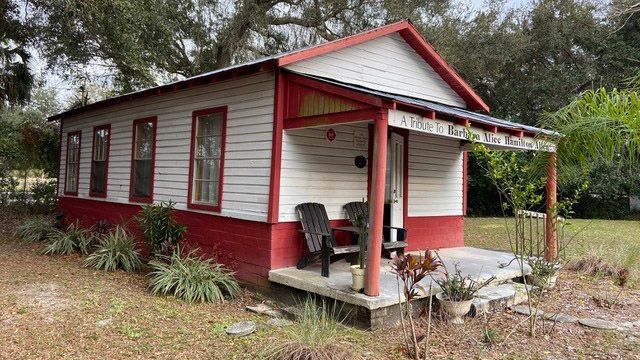 ODESSA, Fla. — Inside Charlie Walker Middle School in Odessa, history goes unnoticed as diversity sits side by side in classrooms everyday.  But the name “Charlie Walker” connects to a different time and a different place just three miles away.

“He said he went on a Monday,” Walker’s daughter Curtiss Wilson remembers. "It was Thursday before they talked to him. And they said they made him wait because they wanted to see whether he was really serious.” (Curtiss Wilson holding a photo of her father Charlie Walker)

Walker eventually got the okay to build The Citrus Park Colored School.  The red one-room school house was constructed in 1926.

“Everybody was like one family,” former student Mattie Ford said. “I learned a lot. We did English and History.”

Inside the school, one teacher taught seven grades.  There were no more than 30 students.  The classes used hand-me-down books to learn.

“First time I had seen a brand new book, I was in fifth or sixth grade,” Wilson said.

Instead of a bathroom, there was an outhouse — one for boys, one for girls. The school was built because African Americans were not allowed to go to the school nearby, Citrus Park Elementary.

“I didn’t have no emotion about it,” James said. ”You knew you couldn’t go to Citrus Park, to that school, so you just accepted it.”

Decades of wear and tear have taken it’s toll on the one-room school house.  But students will never forget what they learned there. (The red one-room school house was constructed in 1926. One teacher taught seven grades and there were no more than 30 students)

Ford passes by the school every time she goes to church.  Mount Pleasant AME now owns the property.  The school was shut down in 1948 because of the condition and there wasn’t enough students.  The children who went there were bussed from Odessa to the African American school in Sulphur Springs.