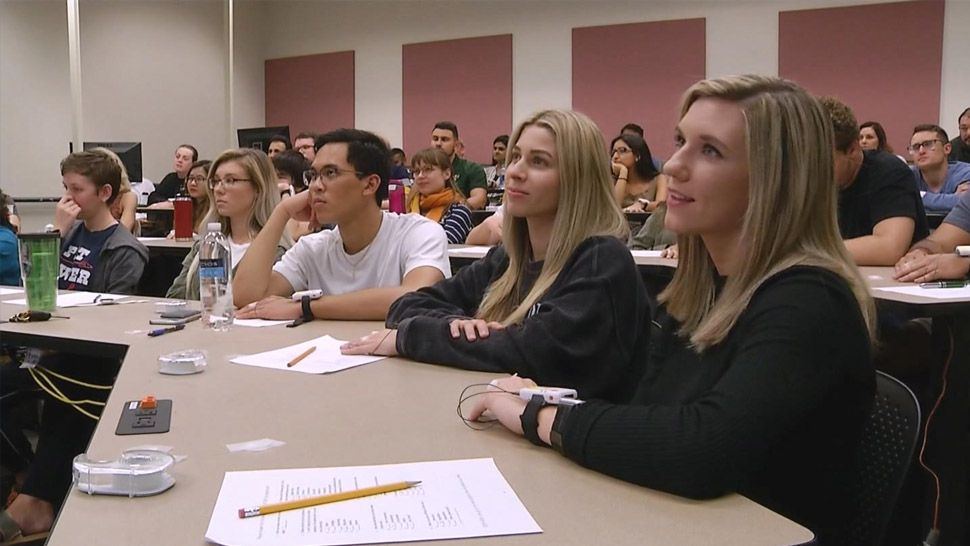 Many political analysts believe political opinions are based on emotions, not reasoning. A group of USF students and faculty tested that theory Wednesday night during the Democratic debate. (Spectrum Bay News 9)

Are Political Opinions Based on Emotion or Reason? USF Students Test Theory During Democratic Debate

TAMPA, Fla. — Many political analysts believe political opinions are based on emotions, not reasoning.

That theory was tested out during Wednesday night's Democratic presidential debate on a group of students at the University of South Florida.  The group was equipped with sensors that measured their responses to the interaction between the candidates.

"We'll watch the debate, and essentially we'll be watching traces on a graph on a chart to see how people are reacting, and when everybody moves together, you know that something happened in the event," Rob Hammond said.

The evening began with 39 students and faculty members placing a wrist-strap with the sensor on their left hand. Then they sat back and watched the debate.

Hammond said essentially they were looking for emotional arousal from the viewers, something that marketers have been working for a long time.

"So you can imagine we're watching an ad. I want to know what you're looking at, whether your facial expressions are saying that you're excited or you're sad, and then I want to understand how you feel about it, because you know, I can fake a smile, but it's very difficult to fake your heart rate, or fake the connectivity of your skin," Hammond explained. Geoff Gill is president of Shimmer Americas, which has been in the neuro marketing business for more than a decade. He said his technology has been used to measure everything from product design to advertising testing, to creative testing for T.V. shows.

"We happened to be down in Florida and I thought this would be a great location because Florida's a swing-state, you know, a lot of interest here, and so I knew Rob, so it worked out really well," he said.

Gill said that shimmer used their technology in Ireland during the Brexit debate two years ago, but that the biggest emotional response came from watching an American politician — President Donald Trump.

Here are the real-time results of the test: