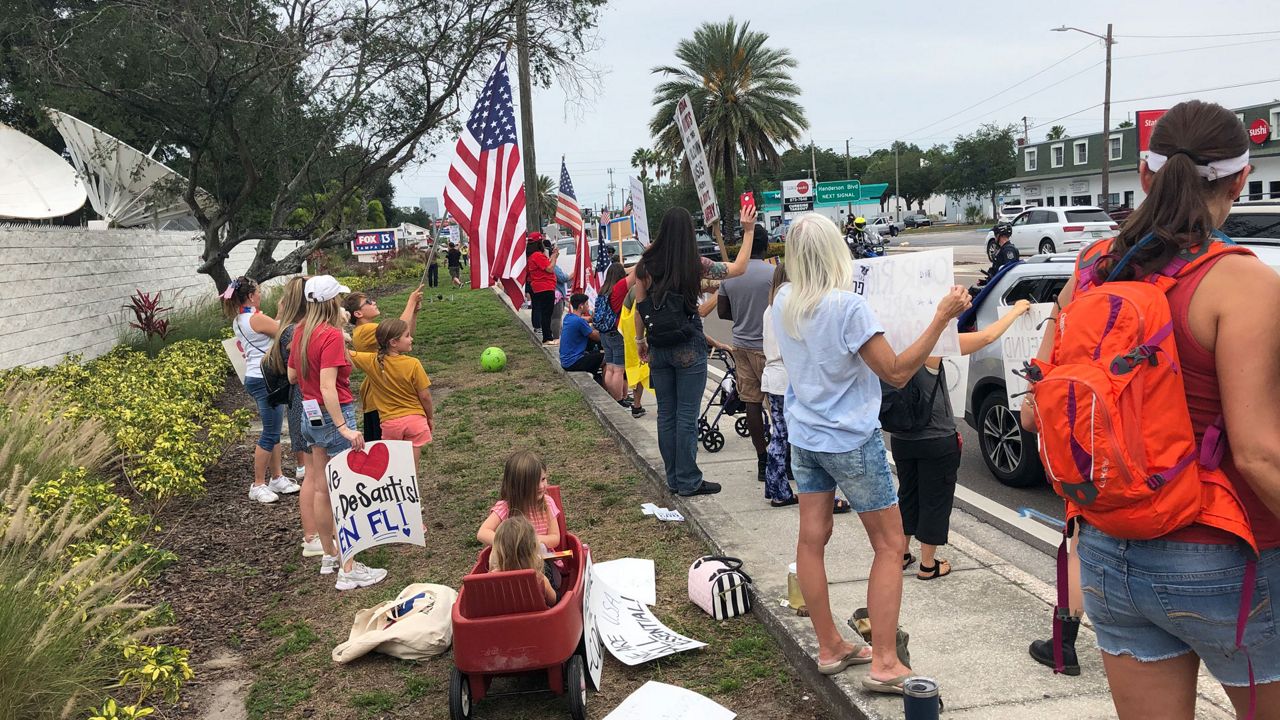 Hillsborough Protesters' Message to DeSantis: "It's Time to Re-Open Florida"

TAMPA, Fla. — Gov. Ron DeSantis’ stay-at-home order that locked down the state to contend with the novel coronavirus is scheduled to expire later this week. With that in mind, more than a hundred people gathered in Tampa on Sunday afternoon to tell him that now is the time to re-open Florida for business.

Protesters initially gathered in the Westshore Mall parking lot, then formed a caravan that made its way to an area TV station on Kennedy Boulevard at 3 p.m.

Flannery emphasized that she had no criticism of Gov. DeSantis. She said the rally was intended to give him the political courage to start opening up the state to business.

Flannery says people have become too fearful of the power of the virus.

“The Nazis had a statement when they were trying to control everybody, and the statement was, ‘It’s for your own safety.’ So the word 'safe' is being used as a control for us,” she said.

The Florida Department of Health reported Sunday that more than 31,000 people have tested for COVID-19, and 1,074 have died due to the virus.

DeSantis said on Saturday that he’s in no rush to lift restrictions imposed on businesses that have been shuttered since he ordered his executive order that began on April 1. In that respect, he sounds different than Georgia Republican Governor Brian Kemp, who has opened up several aspects of his state’s economy.

Tampa resident Johnny Rich is a carpenter who hasn’t been able to work since the lockdown began a month ago. He blasted modeling projections that said that the virus would kill more Americans than has been the case to date.

"You know how many businesses have been destroyed because of this? It’s ridiculous," he went on. "Mom and pop shops are suffering and stuff like that. It’s time for everybody to stand up and get out.”

New Port Richey resident Janine Dombrowski New Port Richey says she doesn’t want her daughter growing up in a world where people are afraid of other people.  She also believes the virus is only deleteriously affecting a segment of the population that isn’t as healthy as they should be.

“Why should my family suffer because somebody else is eating McDonald’s every day or has underlying conditions – no fault of their own," Dombrowski explained. "That’s not my problem. I put the sodas down, I put the GMO’s down. I put the pesticides down.”

Covid-19 is expected to be part of our lives until an effective vaccine is produced and accessible to everyone. But Dombrowski laughed when asked if she would get vaccinated against this pathogen.

“Absolutely not," she replied. "I mean, are you insane? Why?”

“I think the media has grabbed a hold of the fear factor involved in this and they have run in an undue fashion with it,” said Dick Maxwell from New Port Richey. “Whether that is to promote ratings, make more money, I don’t know what promotes it.”

Polls show that most Floridians aren’t up for relaxing the social distancing measures that have been in place for the past month. Not yet, anyhow.

A survey released last week by Quinnipiac showed that 72 percent of Floridians said they prefer the state not loosen social distancing rules when the governor’s original executive order expires this week. Also, 76 percent of those asked said the state should only re-open when public health officials deem it safe, compared to 17 percent who say it should re-open even if public health officials warn against it.