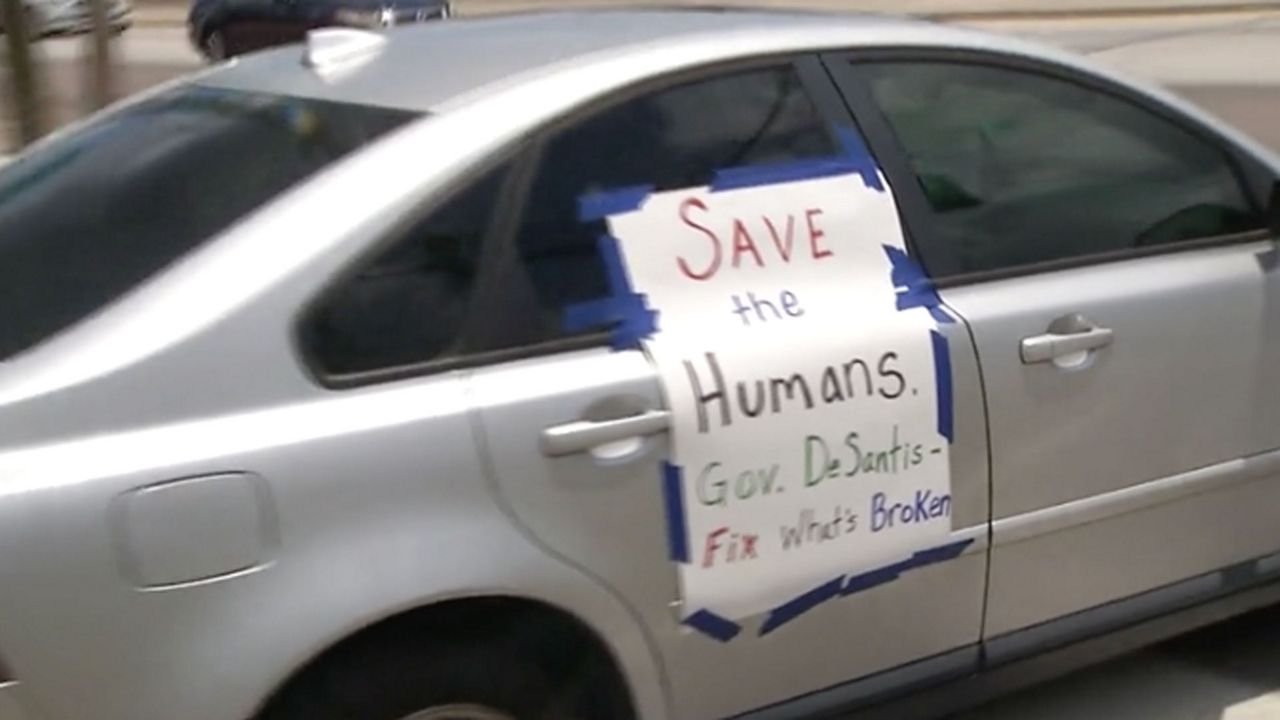 "Save the Humans. Gov. DeSantis - fix what's broken" sign taped to the side of a car seen in a mock funeral procession in Tampa Wednesday. (Mitch Perry/Spectrum Bay News 9)

Activists Call on Gov. DeSantis to Slow Down Florida Reopening

TAMPA, Fla. — As the nation approaches 100,000 deaths from the novel coronavirus, activists in Tampa joined a number of other progressive organizations in major cities across Florida on Wednesday to send a message to Gov. Ron DeSantis regarding the pace of his plans to reopen Florida:


Specifically, the coronavirus’ disproportionately deleterious effect on the black community is what prompted the organizations to hold mock funeral processions around the state on Wednesday. COVID-19-related deaths of African Americans comprise 22 percent of all COVID-19 fatalities in Florida according to Stateline, a publication published by the Pew Charitable Trusts.

Compare to that the fact that African Americans only make up 18 percent of the state's population.

“We are dying in disproportionate numbers to everybody else, so it would be irresponsible for us to open up as early as we (have) because people’s lives are in jeopardy, and people are dying,” said Evan Lawson with Organize Florida.

The reasons for the high numbers of cases and deaths in the black community have been extensively reported in the past few months. As Stateline reports, blacks have a higher rate of underlying conditions, such as asthma and high blood pressure, which make them more vulnerable to the virus.

They’re also much more likely to be exposed to more people by using public transportation and having front-line jobs.

And though the number of tests have increased in Florida, Lawson believes that there needs to be more done in the black community.

“I know we have a heat map of where the virus is concentrated at, but how do we really know if there aren’t as many testing sites?” she said.

Wednesday's protest procession in the Bay area began at Gudes Funeral Home in East Tampa. Motorists then traveled to a variety of other funeral homes through the city as part of the event.

Tampa councilman calls for extension of moratorium on evictions

Although the majority of Floridians in public polls have said that they aren’t ready to relax social distancing rules, there hasn’t been much organized opposition to the governor’s decision in recent weeks to allow businesses and restaurants to reopen, albeit with limitations.

That’s in contrast to protests that occurred throughout the state late last month when there were calls for DeSantis to reopen the state’s economy.

The state has been economically devastated by the lockdown, which has forced scores of businesses to shut down, some permanently.  More than 1.9 million Floridians have filed for unemployment, though hundreds of thousands continue to be shut out of getting any benefits.

While Democrats blamed the state’s unemployment website, the governor has said that the problem has mostly been with people not filling out their applications correctly, or otherwise being ineligible.

A major concern for the unemployed is paying rent. The governor’s moratorium on evictions and foreclosures is set to expire next week.  Senate Minority Leader Audrey Gibson wrote to DeSantis on Wednesday, calling on him to extend the moratorium until July 1.

Tampa City Councilman Orlando Gudes, who is the co-owner of the aforementioned funeral home, says DeSantis must extend that moratorium.

“I’ve got people every day calling,” he said. “You’ve been out of work for two or three months, and now the rent’s due? How are you going to pay? I’m praying that he will extend that.”

DeSantis lashed out at reporters in Orlando last week, saying that those who predicted that Florida would be crushed with COVID-19 infections have been proved wrong to date.

“We’ve succeeded, and I don’t think people want to recognize that, because it challenges their narrative, it challenges their assumption, so they got to try to find a bogeyman,” DeSantis said. “Maybe it’s that there are black helicopters circulating around the Department of Health. If you believe that, I’ve got a bridge in Brooklyn I’d like to sell ‘ya.”