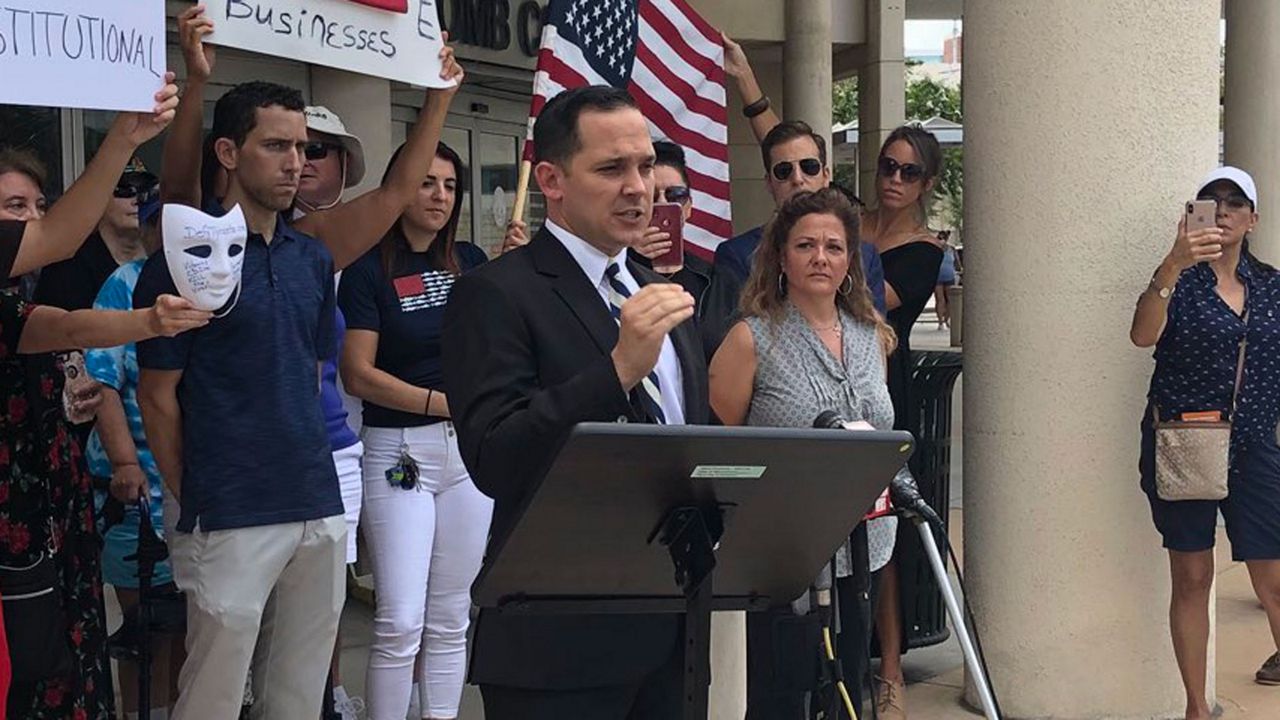 In the past week, he’s been a one-man legal band in attempting to overturn face mask ordinances recently approved in the Sunshine State.


Sabatini's latest lawsuit targets Hillsborough County, following the ordinance passed last week by the Emergency Policy Group that says that all business operators of indoor locations shall require all persons coming inside their establishment to wear a face covering.

Sabatini says he doesn’t have a problem with people wearing masks, especially the most vulnerable.

“I don’t want it to be political,” he said shortly before the formal press conference announcing the lawsuit took place in front of the Hillsborough County Courthouse on Monday. “Unfortunately, power hungry local government politicians have made it a political issue by trying to criminalize people who disagree with them.”

“The truth of the matter is, everybody knows what risk tolerance they should have," he went on. "If you’re part of the small but vulnerable population in Florida that probably should be wearing a mask, well then, obviously, consider wearing a mask and social distancing. In passing laws and criminalizing everyone who disagrees with you, that’s just out of – that’s just out of control.”

Burden to enforce on business owners?

With COVID-19 transmissions exploding in recent weeks, Hillsborough County Health Director Doug Holt said last week that wearing masks is the best measure to reduce the huge surge of COVID infections. In addition, an analysis collated by The Lancet published this month found that mask wearing significantly reduces the risk of viral transmissions.

But like so much else in America, however, wearing masks in the age of COVID has become a partisan issue.

Democrats and those who lean Democratic are more likely than Republicans and Republican leaners to say they personally wore a mask all or most of the time in the past month – 76 percent vs. 53 percent - according to a Pew Research survey conducted June 4-10, 2020.

Sabatini filed the lawsuit against Hillsborough County on behalf of Plant City family farmer Eric Gonyon. Gonyon says that he’s done all the right things as far as being a responsible business owner in the age of COVID-19, such as buying additional cleaning supplies and purchasing face covering signs.

Gonyon said the Emergency Policy Group’s mandate is just another burden to bear.

“Another headache, another hardship, and it’s another expense,” he said. “The county is now placing business owners in a position of authority that we’re not equipped, trained, prepared and totally unqualified to handle."

Like Sabatini, Gonyon says it’s not about wearing masks that he has an issue with.

“But as a business owner, who am I to tell people what to do? I shouldn’t. That’s not my job,” he says.

The Hillsborough County Emergency Policy Group attempted to pass an ordinance requiring masks back in April. However, strong public opposition compelled the group to hold off approving the proposal at that time.

Last week, though, with COVID cases exploding in Hillsborough County, the EPG passed the measure on masks by a 5-3 vote.

Attorney KrisAnne Hall, who is also working on behalf of Gonyon, calls it government overreach.

“It is not the government’s responsibility, nor the government duty to tell the individual how to live their life, how to take care of their family, and to cherry pick and provide us with opinions,” said Hall.

An aide to Hillsborough County Commission Chairman Les Miller, who was a leading voice pushing for the mandate on the Board of County Commissioners, said he was aware of the lawsuit, but said neither he nor the rest of the board would be able to comment on pending litigation.

More than a dozen counties and even more municipalities have passed mask ordinances, but Gov. Ron DeSantis has resisted making it a statewide mandate.