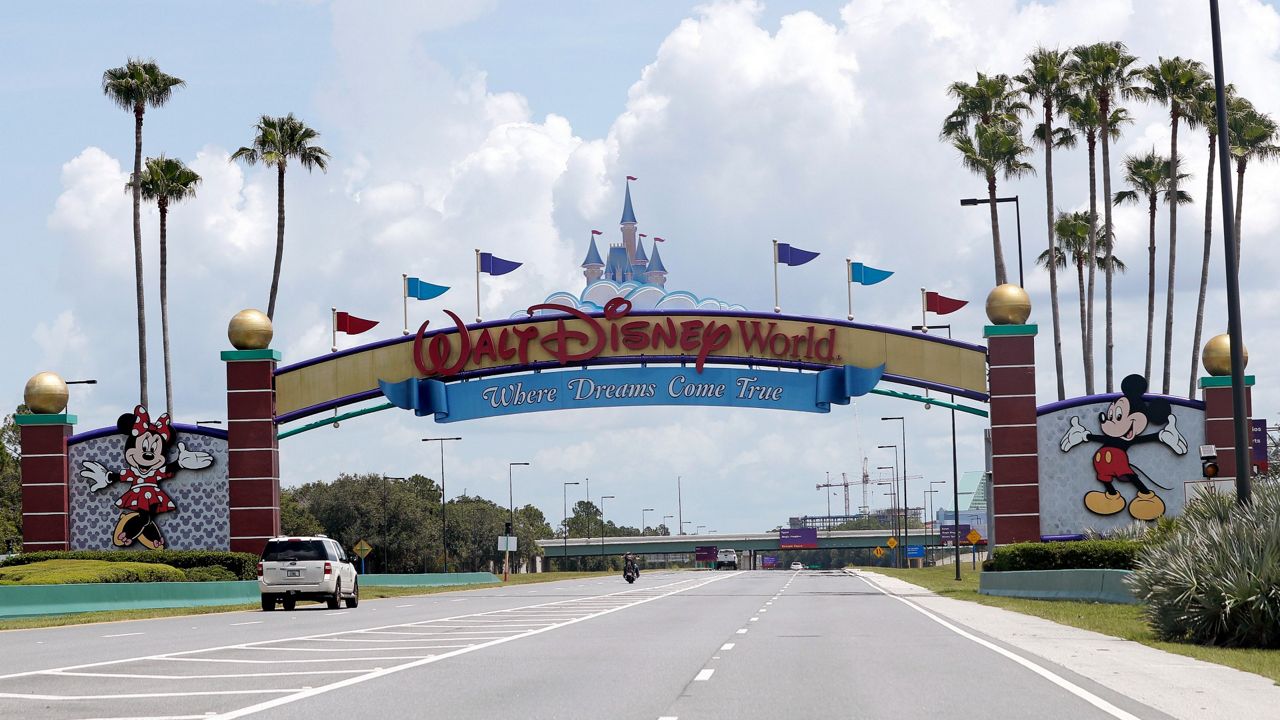 ORLANDO, Fla. — For the first time in 115 days, Walt Disney World is opening their gates to guests.

The theme park resort took the rare act in March to shut down operations in an effort to help suffocate the spread of the coronavirus pandemic.

The extended, months-long shutdown of theme parks, hotels, restaurants, and other businesses across the state of Florida alone will likely be tallied in billions of dollars.

Several weeks ago, Disney started recalling the first round of employees, or cast members as the company calls them, to prepare to reopen.

Crystal Rosas works in attractions at Disney’s Hollywood Studios. She’s among the undisclosed number of Disney workers returning to their jobs.

Rosas and her husband both work for Disney and were furloughed during the park’s closure.

“It’s (not) something you plan on,” Rosas said. “For financial reasons I was starting to have anxiety attacks, honestly, so it was really scary at that point.”

Like many families, Rosas and her husband had to consider how to stay financially afloat during the extended period of unemployment, at which point they did not know when they would return to work.

It is work Rosas is excited to return to.

“It’s amazing, I love making magic,” Rosas said. “Especially those who have never been to Disney before, you get to see them walk in and smile.”

Cast members and annual passholders have a jump start on seeing the COVID-focused changes within the park’s operations. Disney plans to reopen Magic Kingdom and Animal Kingdom Saturday, with EPCOT and Hollywood Studios opening next week.

All of the theme parks have installed a series of practices including temperature checks, reservations for park entry, requirement to wear a mask, and cleaning schedules.

Disney’s reopening also ushers in a level of optimism for Central Florida, which has been especially hit hard economically.

“It is the final jewel in our tourism crown getting back in place, visitors who come to the area can go to all of these parks,” said Dr. Sean Snaith, head of the Institute for Economic Forecasting at University of Central Florida’s College of Business.

Snaith said the impact of Disney specifically is in the footprint it holds to the local economy. Disney is not only a major employer in the area, but also does business with hundreds, if not thousands, of companies throughout the region. This includes a variety of service companies and suppliers.

In dollars and cents, Disney’s reopening is a big deal.

Patronis said 77% of the state’s budget is funded by tourism revenues.

Since then, predictions focused on a potential loss of nearly $800 million statewide each month.

Before the start of the state’s new financial year July 1, Gov. Ron DeSantis vetoed $1 billion in spending from the state’s final $92.2 billion budget.

Orange County Mayor Jerry Demings long ago cautioned that the coronavirus could force various financial cuts or restraints for several years ahead.

A significant safety net for local governments and school districts is that the bulk of their budgets are generated by property tax revenue. A saving grace of sort is that the housing market continues to hold steady during the times right now.

The challenge for Central Florida’s tourism industry, Dr. Snaith said, is adapting to the impacts of coronavirus while also maintaining consumer confidence.

“Science is going to play a big role here,” he explained. “I think it’s been a learning curve, and I think Disney has been observing and continuing to adjust and make changes as we go forward, to see what works and what doesn’t work.”

Virgil and Rilynne Johnson of Cincinnati, Ohio, spent the past 10 days at Disney’s Saratoga Springs with their five children to get a look at how future vacations may look.

“It was actually creepy because when we got here last Tuesday, we were the only ones here,” Rilynne Johnson said. “We were the only people there. We had the pool to ourselves.”

It took some adjusting, but Rilynne Johnson said they were quickly won over by what they saw.

“We wanted to come first to see how it was, but they have extensive measures for cleaning and all of that stuff,” Rilynne Johnson said.

The state, and Central Florida, needs tourists. What’s hard to predict right now is when they will return.

Phil Brown, Executive Director of the Orlando International Airport, predicted this summer that it could be up to five years before the region sees pre-pandemic levels of tourism.

I met Albert Fairley near @MCO. He drives for Lyft trying to support his family.

In January 2020, the Greater Orlando Aviation Authority estimated by year’s end it would see close to 53 million passengers at the airport.

At the height of the pandemic, 98% of flight operations at MCO were halted. More than 100 aircraft from various airlines were grounded, parked at spots across the airport’s property.

Lingering over predictions continue to be further cuts.

This week Rosen Hotel and Resorts announced it was laying off a “substantial” number of workers “… due to the extreme business circumstances caused by the global pandemic,” a company spokesperson said.

“Never in the 46-year history of my company would I have envisioned such a drastic decision,” Harris Rosen said in a statement.

Rosen built the company that now includes more than half a dozen hotels and resorts across Central Florida.

Other tourism workers have told Spectrum News that their employers have told them that they could face prolonged furloughs for several more months.