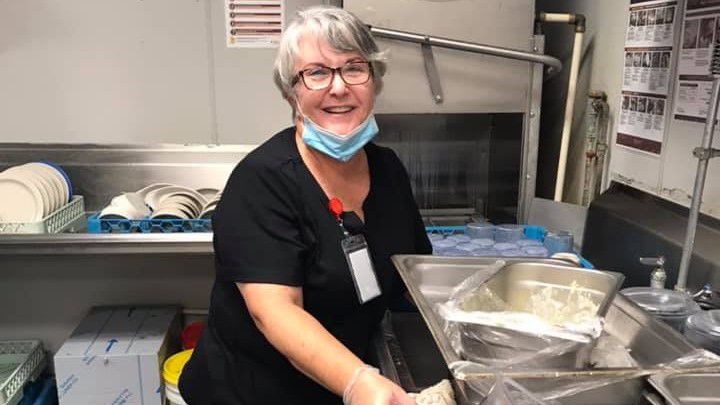 Woman Takes Dishwashing Job to Reunite With Her Husband

A Florida woman, separated for months from her husband, was finally able to see him again after taking a part-time job as a dishwasher at his assisted living facility.

Mary Daniel now calls it her dream job because, when her shift is over, she gets to spend time with her husband, 66-year-old Steve Daniel.

Daniel said her husband is the love of her life, and it was devastating when he was diagnosed seven years ago with early on-set Alzheimer’s Disease. Last July, Daniel said she made the tough decision to place him in memory care at Rosecastle of Deerwood in Jacksonville, just five miles from the couple’s home.

Every night, Daniel said she would visit the facility to help with her husband’s bedtime routine. Then, at the start of the coronavirus pandemic, the state put an end to all visits at long term care facilities.

Daniel said she made it known to facility administrators that she wanted to work or volunteer there, so she could see her husband.

Eventually, they took her up on the offer.

“They called me out of the blue, and they said we have a position available – part-time position. Would you like to take it and I said yes,” Daniel said. “And then I said what is it? And they said it’s a dishwasher. It didn’t matter. It really didn’t matter. I mean it was a way for me to get in.”

So, after 114 long days of waiting, Mary went to her first evening shift. And, after the last dish was done, she finally got to see her husband in person.

“Relief.  Overwhelming relief. We both cried,” Daniel said. “And just held each other. Just the longest hug of feeling him. It makes me want to cry right now just thinking about it.” Now, Daniel works two shifts a week on top of her full-time job.  She said she was trained and goes through testing just like the other staff members. Daniel said she takes the position very seriously and plans to use the money she makes to treat the staff as a thank you for all of their hard work.