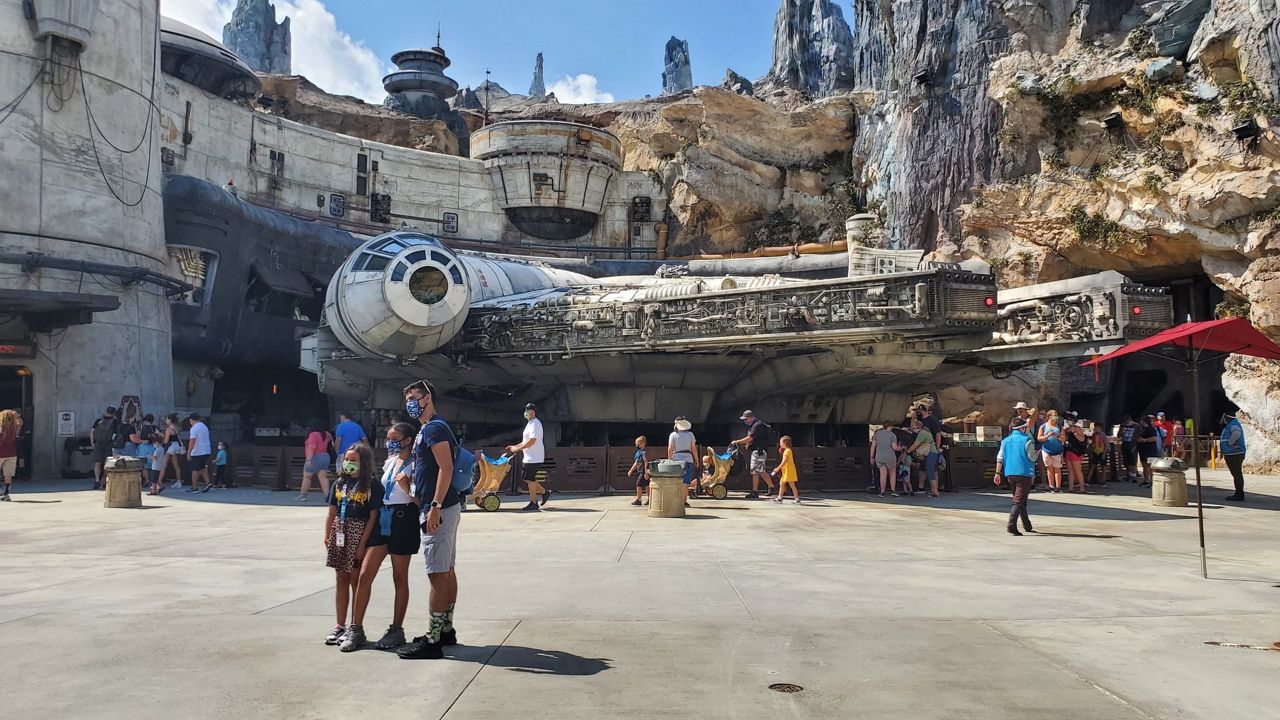 Disney's Hollywood Studios and Epcot, Disney World's other two theme parks, reopened to the public Wednesday after being closed for four months because of the coronavirus pandemic. Hollywood Studios' most popular rides, Star Wars: Rise of the Resistance, will use a modified virtual queue system. (Ashley Carter/Spectrum News)

ORANGE COUNTY, Fla. — Disney's Hollywood Studios and Epcot, Disney World's other two theme parks, reopened to the public Wednesday after being closed for four months because of the coronavirus pandemic.

Hollywood Studios opened at 10 a.m. One of the park's most popular rides, Star Wars: Rise of the Resistance, is using a modified virtual queue system.

Over at Epcot, which opened at 9 a.m., there is the new "Taste of Epcot International Food & Wine Festival," a modified version of the park’s popular fall food fest.

Disney's Hollywood Studios and Epcot reopen today at Disney World after being closed for four months because of the ongoing coronavirus pandemic. pic.twitter.com/lmdxmdaZvF

With Hollywood Studios and Epcot joining Magic Kingdom and Disney's Animal Kingdom, which reopened on Saturday, Wednesday marks the first time since mid-March that all four Disney World theme parks have been open at the same time.

The parks have undergone changes due to the ongoing pandemic. Several new health and safety measures have been put in place, including mandatory face masks, temperature checks, social distancing protocols, reduced capacity, and increased sanitization.

Visitors are also required to make a park reservation in order to visit the parks.

The reopening of Disney World's parks comes amid a recent surge in coronavirus cases in Florida. Central Florida's theme parks closed in early March in an effort to stop the spread of the virus. Universal Orlando and SeaWorld Orlando reopened in June with new health and safety measures in place.

Visitors Report More Space to Roam But Few Other Differences

Passholders we spoke to said Wednesday's park experience felt no different than other days.

"Everything in the morning is pretty much walk on right now," Passholder Randy Chew II said while strolling around Magic Kingdom on his fifth day at the parks.

He said even with all four parks now open, lines are a breeze and guests are spaced out.

"The longest wait time I've seen so far was at Magic Kingdom and it's probably been 40 minutes, and it was Splash Mountain, the hottest point of the day on Monday," Chew II said.

Jeff Ruble is also a Disney enthusiast and was getting on Tower of Terror when we talked. He said even at Hollywood Studios, Wednesday was the smoothest he's seen the parks operate.

"It was a breeze, I pulled up 9:15ish, and there wasn't even a line at the parking booth," Ruble said.

Temperatures checks and bag checks are going on as normal, with passholders telling us wait times across the board are low.

This week, Disney announced Hong Kong DisneyLand is closing again following the city's ban of public gatherings over four people because of the coronavirus pandemic.

"I honestly feel safer at Disney than I do at most places," he said.

We asked Disney about attendance numbers. We were told that is not discussed outside of earnings calls.

Disney officials said they'll make adjustments as needed as they continue to monitor the pandemic.