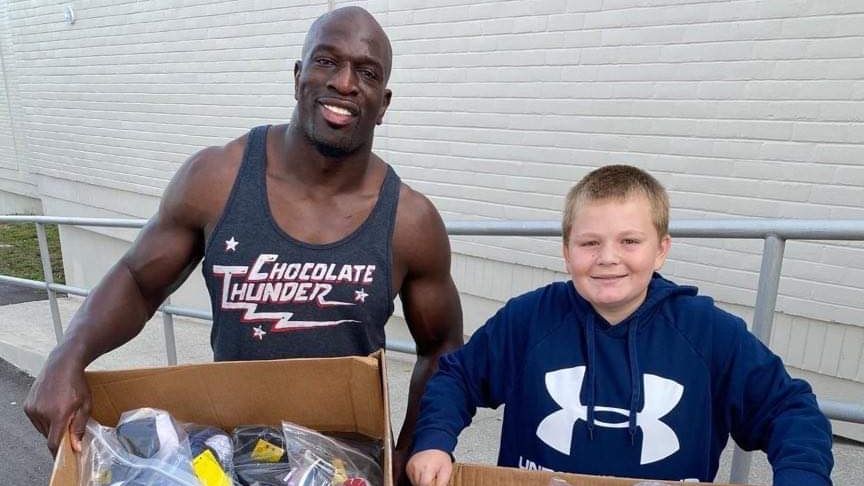 Mitchell Richison first got the idea when he cleaned up some pairs of old shoes and brought them to WWE wrestler Titus O’Neil, real name Thaddeus Bullard, head of the Bullard Family Foundation in Tampa. (Tim Wronka/Spectrum Bay News 9)

13-year-old Teams up With Titus O'Neil to Donate Sneakers

APOLLO BEACH, Fla. - Most days, it smells like peanut butter in the kitchen, as 13-year old Mitchell Richison makes dog treats from scratch.


“Ever since I was little, I’ve always wanted to be an entrepreneur,” Mitchell said.

He and a friend started Richwell Treats in Apollo Beach when he was just 11. These days, he runs it himself, with some help from his mother, Angela.

But the money he makes is not going in his pocket. He’s now using it to buy shoes to give away.

“Through COVID, I know a lot of people have lost their jobs and with school coming up, they might want a brand-new pair of shoes for their kids,” Mitchell said.

He first got the idea when he cleaned up some pairs of old shoes and brought them to WWE wrestler Titus O’Neil, real name Thaddeus Bullard, head of the Bullard Family Foundation in Tampa.

#GoodNews today on @BN9: 13-year old Mitchell Richison of Apollo Beach runs his own dog treat business. He’s now using the money he makes to buy shoes for kids in need, especially during the pandemic. @TitusONeilWWE even helped him get started! pic.twitter.com/TOvOWHTrGE

During that meeting, Titus had another idea. Moved by Mitchell’s kind thought, Titus gave him several pairs of brand new shoes that he could give away personally.

“I was in shock,” Mitchell said. “He was telling me about how he grew up and it’s better for someone to have new shoes. They will remember it forever.”

His mom Angela was floored, too.

“For Titus to take the time and explain to Mitchell his story and how he grew up, and what getting new shoes meant to him, versus hand-me-downs, I’m not going to lie. I teared up. You could see that it really affected Mitchell and what it meant to him,” Angela said.

That meeting gave Mitchell a new mission. He decided to use the money from his business to match the donation Titus made him. Now has dozens of shoes ready to go.

He just gave away his first pair of many more to come.

“I feel like when I’m giving someone new pair of shoes they’re having all of this joy and they’re so happy,” Mitchell said. “And they get to go home and tell of their friends about having a new pair of shoes and that makes me happy because they are happy.”