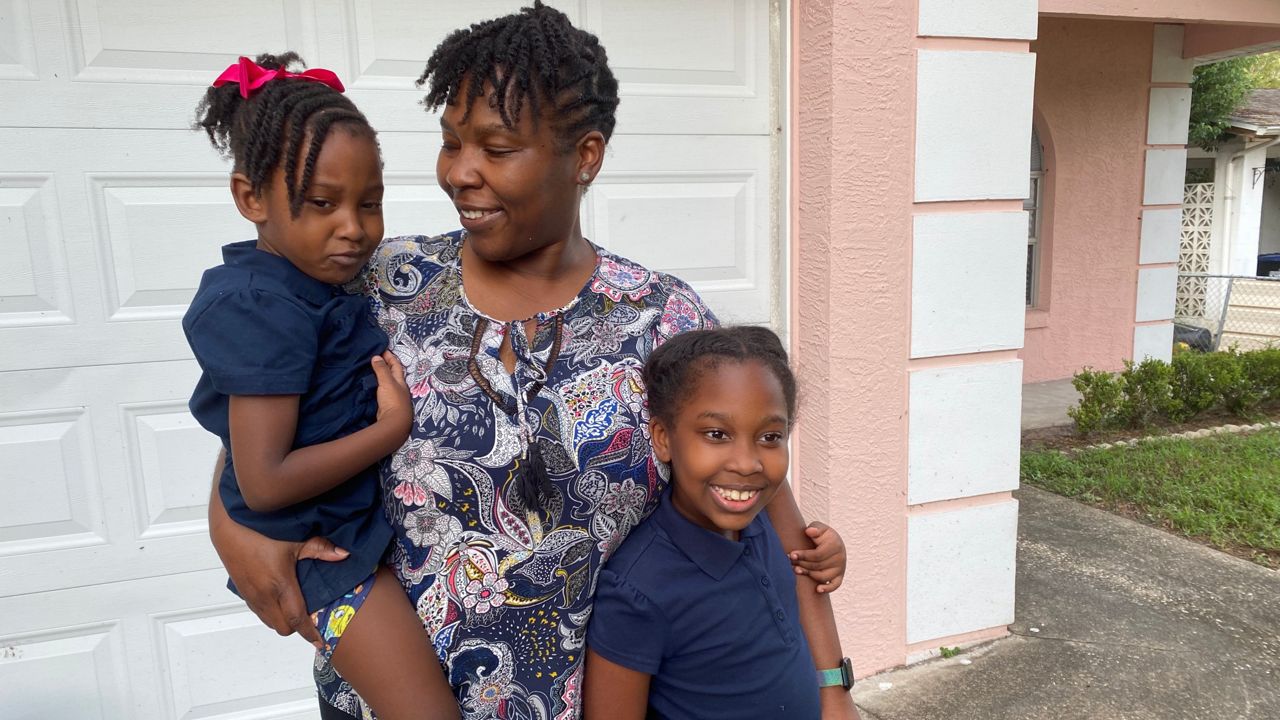 But Walker doesn’t mind. She has her own home, for herself and her two daughters, Skylar and Morgan. That’s all that matters.

“It feels good to be able to put your hands in and get some things done. It’s worth it,” Walker said.

That sense of ownership is huge for Walker, who decided after a decade of renting that she wanted more stability for her kids. The idea of a more consistent monthly housing payment was appealing to her, too.

When Walker moved to the Orlando area from South Florida in 2017, she was appalled by spiking rents in the area.

“I moved here because it was a little less expensive and I'm a single mom and I was trying to, you know, budget,” Walker said. “But as soon as I moved, the rent started almost doubling.”

She was able to eventually purchase a home thanks to HANDS of Central Florida, a housing counseling agency and affordable housing developer that guides Orlando-Kissimmee-Sanford residents through the homeownership process.

HANDS, an agency certified by the U.S. Department of Housing and Urban Development, provides one-on-one counseling for clients as well as an immersive, 8-hour homebuyer seminar that features talks from realtors, loan officers and home inspectors.

“We’re here to educate them and kind of be a resource and a guide to them, to say OK, this is the next step,” said Amanda Hough, supervisor of housing counseling at HANDS.

A Personal Guide to Homeownership

With a small staff of only four full-time employees, HANDS assists around 180 clients at any given time, providing highly personalized assistance through individual counseling sessions.

That personalized approach was of great benefit to Walker, who said she learned about the steps to purchase a house from beginning to end, as well as local sources for down payment assistance.

“[HANDS] helped with making sure I was on track as far as credit, telling me things I needed to fix,” Walker said. “Any questions or anything I felt uncomfortable about, my counselor [Amanda] was there for me every step of the way.”

Besides helping Walker feel more comfortable throughout the process of purchasing a home, HANDS also made the act of homebuying itself more accessible, by providing Walker with lists of vetted lenders who could help her with her down payment.

Walker ended up receiving $25,000 in down payment assistance, she said.

HANDS, a nonprofit agency, is funded by a variety of grants and foundations, as well as with dollars from Florida’s SHIP (State Housing Initiatives Partnership) program, which makes up the local component of the state’s Sadowski Affordable Housing Trust Fund. The Sadowski Fund, created in 1992, is a dedicated revenue source for Florida’s affordable housing programs.

Through SHIP, local governments receive funding to create and maintain affordable homeownership initiatives and multifamily housing options. The program was designed to serve Floridians in the very low, low and moderate income brackets.

This year was the first since 2002 that the Sadowski Fund’s budget was approved in full, according to Florida Housing Coalition CEO Jaimie Ross. It’s estimated that Florida lawmakers have drawn at least $2 billion from the Sadowski Fund over the past 20 years for initiatives unrelated to affordable housing.

But Governor Ron DeSantis decided in July to strip SHIP entirely from Florida’s budget – all $225 million he had previously approved for the program.

SHIP funds are deployed to local governments — Florida’s 67 counties, plus some of its larger cities — and those local governments then partner with organizations that specialize in different aspects of affordable housing work.

Another Chance at Funding?

Ross, Florida Housing Coalition’s CEO, said that while SHIP funds are currently not allocated to the program that could change — if legislators decide to re-allocate the funds during an expected special session after the November election.

“That money is sitting in the local government housing trust fund. It hasn't been moved. So we haven't lost a penny of that money,” Ross said. “The money’s still there. It’s just that it has to be appropriated again.”

If the funds are re-appropriated, it could make it easier for more families like Walker’s to find stable ground in a home of their own.

“You want the stability,” Walker said. “And my kids love their school and everything, so you want to keep them consistent as well … just having somewhere they can grow, and also teaching them the responsibility of owning something.”

Molly Duerig is a Report for America corps member who is covering affordable housing for Spectrum News 13. Report for America is a nonprofit national service program that places journalists in local newsrooms to report on undercovered issues.