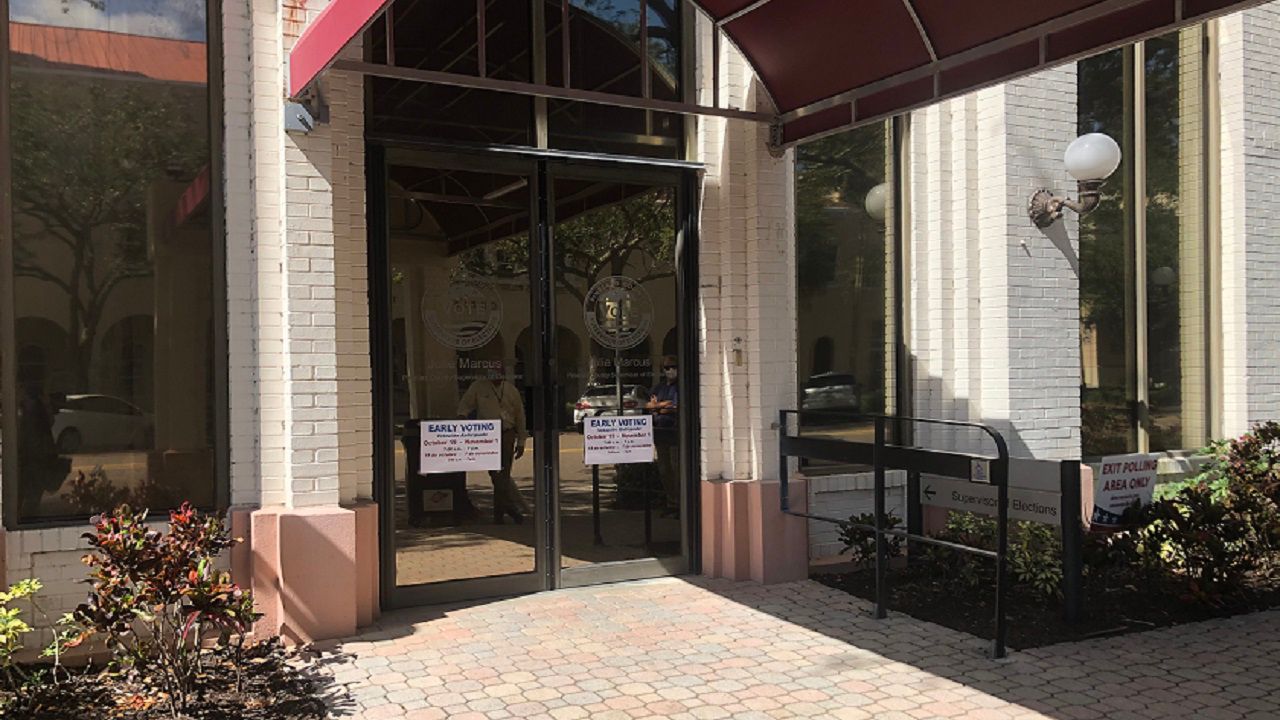 Sheriff: No Indication Polling Place Guards Were From Trump Campaign

ST. PETERSBURG, Fla. — Responding to allegations that there was voter intimidation at a St. Petersburg early voting site, Pinellas County Sheriff Bob Gualtieri said on Thursday that he would now use sheriff deputies to watch over all five early polling locations in the county.

His remarks came following an incident on Wednesday afternoon near the early voting location officially listed at 501 First Avenue North in downtown St. Petersburg, where two armed individuals with guns were seen mingling with supporters of President Trump.

That apparently led to an allegation that the guards, one of whom is employed by the security firm Syotos out of Crestview, Florida, were with the Trump campaign. But the Trump campaign issued a statement Wednesday night indicating that was not the case.

“The campaign did not hire these individuals, nor did the campaign direct them to go to the voting location,” said Thea McDonald, national press secretary for the Trump campaign.

Gualtieri told reporters early Thursday morning that based on everything he knew about the situation which unfolded on Wednesday, the armed guards did not do anything wrong.

“What violates the law is that if you have a firearm in a polling place,” he said. “They’re not in a polling place, they’re outside the 150 feet. They are licensed – and this is not violating the Open Carry statutes. Because they are licensed security guards in Florida that have a class D and a class G license, which authorizes them to carry firearms and carry firearms openly. And they’re mere presence does not constitute voter coercion or intimidation.”

“I can’t see I agree with him on that,” he said. “There’s zero reason for anyone to be armed, openly armed out in front of a polling place. I can’t think of any justification for that.”

Gualtieri did add that if the guards had done something that “rose to the level of voter coercion or intimidation – that’s a different story.”

The Joe Biden campaign weighed in as well.

“In the United States of America, we cannot and will not stand for any behavior that could intimidate voters from participating in our democracy,” said Carlie Waibel, the Florida communications director for the Biden campaign. “Our country stands for freedom, liberty, and democracy, and these scare tactics have no place in our state. It’s clear that those running scared will try anything in the closing weeks of the election. There are no excuses for this behavior. We are committed to making sure every Floridian can vote and every vote is counted.”

Trei McMullen is with Syotos, the security firm that employs one of the security guards involved on Wednesday. He sent this statement to Spectrum Bay News 9.

“We do not have any employees engaging in poll watching. We had an off duty employee who was picking up a family member who happened to be in the vicinity of a polling location. The employee saw someone they knew near the polling location and had a short conversation. Again, this employee was off duty and was in no way engaging in poll watching. The employee was stopped by a local deputy that had every right to ask what was happening. The employee made it clear that they were not affiliated with the polling both [sic]. A change of information from the officer to the deputy happened and all information came back valid and true. The officer just had on their gear from leaving work and that was taken out of context.”

St. Petersburg resident Melody Stang said the incident was being blown out of proportion. She says the female security guard in question does some work for the Pinellas County Republican Party and was coming by to drop off some Donald Trump campaign signs. She says that the guard and her friend then helped the Trump supporters disassemble a tent located up the street from the polling location.

“But the story was that these armed guards came by to set up a tent, and that’s not the story at all,” she said.

Sheriff Gualtieri says that he is placing armed sheriff deputies at all five early polling locations in the county not just because of Wednesday’s incident, but also because of uncorroborated reports of intense exchanges taking place at early voting sites in Clearwater and Palm Harbor between Trump and Joe Biden supporters.

But Dan Helm, the Democrat running against Pinellas County Supervisor of Elections Julie Marcus, said in a written statement that the idea of placing sheriff deputies at polling locations “shows a complete lack of understanding and complete lack of leadership.”