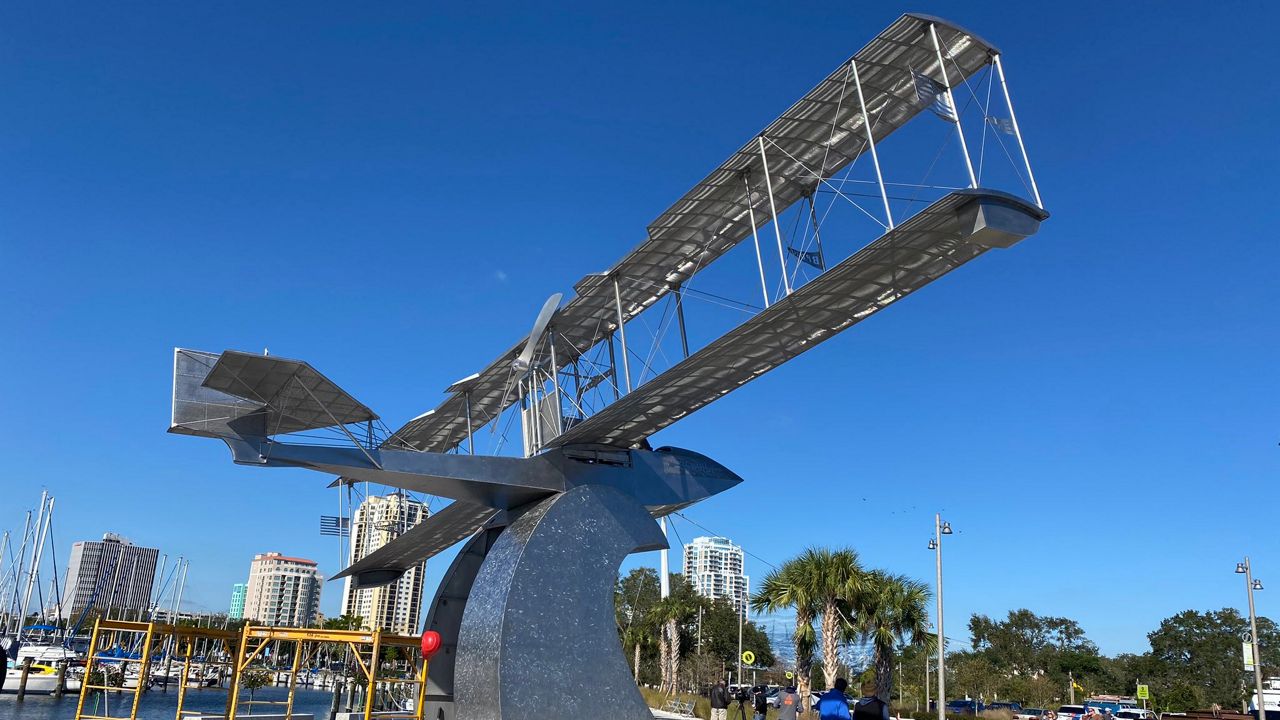 ST. PETERSBURG, Fla. — If you take a walk down the St. Pete Pier, you may notice a new piece of art that explains an old piece of history many don’t know about.

It was January 1, 1914 when pilot Tony Jannus flew former St. Petersburg Mayor Abe Phiel to Tampa for $400, marking the first commercial flight in the world.

More than 100 years later, it’s time to commemorate that accomplishment with a 16,000 pound stainless steel, full scale replica of the Benoist Air Boat that flew that day.

“It’s completely transformed the way the human species functions on this planet. It’s made the world a much smaller place, and it all started right here in the City of St. Petersburg,” said Mark Aeling, a sculptor at MGA Sculpture Studio.

“It’s a big piece of St. Pete history and now I get to be a part of that,” he added.

Did you know St. Pete is home of the very first commercial airline? I know I didn’t! It happened more than 100 years ago in 1914...and now a new art exhibit on the @StPetePier aims to teach everyone about how that event changed life as we know it! @BN9 pic.twitter.com/gyCXt7iSpM

The sculpture is being installed on the same day we celebrate the life of another pioneer in aviation history.

“Chuck Yeager broke the sound barrier,” said Will Michaels, president of Flight 2014, which is made up of four local organizations.

Throughout his decades-long career he has a special tie to St. Petersburg and this sculpture, too.

“Chuck Yeager was here in Tampa Bay a few years ago and received the Tony Jannus award,” said Michaels.

The award is named for the same Tony Jannus who flew the Benoist in that first commercial flight.

Yeager received the award from the Tony Jannus association in 1997 and that association helped put up the new statue.

“Tony Jannus was a record breaking pilot, just like Yeager, and Yeager was following in his footsteps in a way,” said Michaels.

Both now honored and remembered for helping the aviation industry take off.