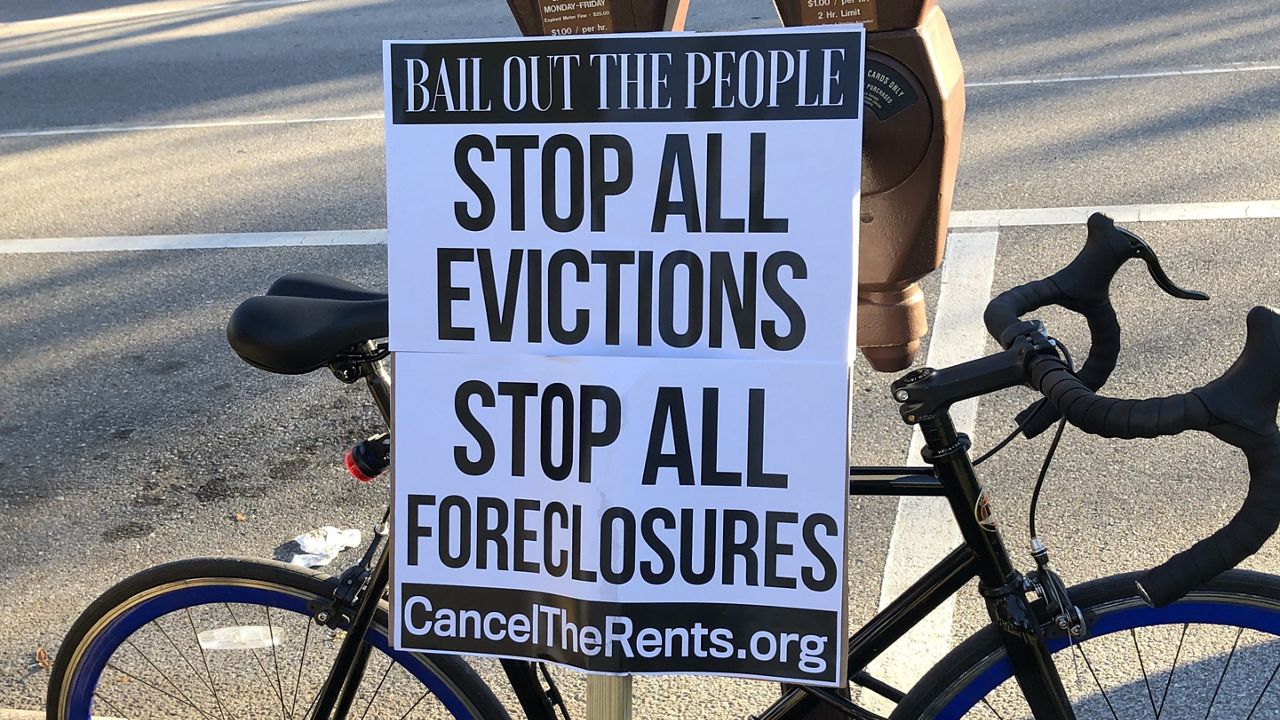 Renters who have fallen behind on their monthly payments because of the income they’ve lost due to the coronavirus pandemic have received some good news.

Congress is expected to extend the nationwide eviction moratorium by one month, as part of the $900 billion economic recovery package that was agreed to on Sunday night.

The moratorium, which was first enacted by the Centers for Disease Control and Prevention in September, was set to expire on December 31.

But evictions have been taking place since the pandemic began.

There have been more than 800 writs of possession issued by landlords in Hillsborough County since August, according to data provided by the Hillsborough Clerk of the Courts office.

A similar amount has been issued in Pinellas County, says rent activist William Kilgore with the St. Petersburg Tenants Union.

“We need an enhanced moratorium, because right now it’s very limited. There’s a lot of loopholes,” Kilgore told Spectrum Bay News 9 before he led a rally regarding the moratorium last Friday afternoon in front of the St. Petersburg County Clerk of Courts office.

The extension of the CDC’s moratorium on evictions was welcomed by Clearwater resident Mel Meyer, but she dreads what happens when her lease is up this coming March.

Meyer moved to Clearwater from Ocala earlier this year but lost her job due to COVID-19 in March. That’s had a dramatic impact on her finances and prevented her from paying off all her rent since then, prompting an eviction notice from her landlord last month. What she’s concerned about, however, is how the eviction notice will affect her future housing needs.

“Having that eviction on your record means you can’t go get another lease somewhere else,” she laments. “That’s the part that’s worrying me right now.”

Florida Gov. Ron DeSantis issued an order in April delaying evictions in the state due to the pandemic. He extended it in late July, but added changes that specifically suspended just the “final action at the conclusion of an eviction proceeding” and only for tenants who had been “adversely affected by the COVID-19 emergency.”

Meyer says the last full month of rent she was able to pay was back in June. She’s received assistance from some local programs such as from the Pinellas CARES Fund, but that program stopped accepting new and recurring applications last month. She filed the form from the CDC’s website and sent it to her landlord but received her eviction notice the day before Thanksgiving

Since then, she hasn’t heard anything from the Pinellas Clerk of the Court’s office.

But she already knows that her lease won’t be renewed in March, and that her eviction notice will be publicly available for other landlords to screen in future tenant credit checks.

In addition to extending the federal moratorium on evictions for a month, the congressional economic recovery bill is also expected to include $25 billion in emergency rental assistance.
More than 14 million Americans say they’re not caught up with their rent, according to the Center on Budget and Policy Priorities. And when the moratorium ultimately expires, renters will owe an estimated collective $30-$70 billion, according to the National Low Income Housing Coalition.

“Extending the moratorium through January provides time for emergency rental assistance to be distributed and for President-elect Biden to improve and further extend the moratorium immediately after being sworn into office,” said Diane Yentel, the president and CEO of the National Low Income Housing Coalition.