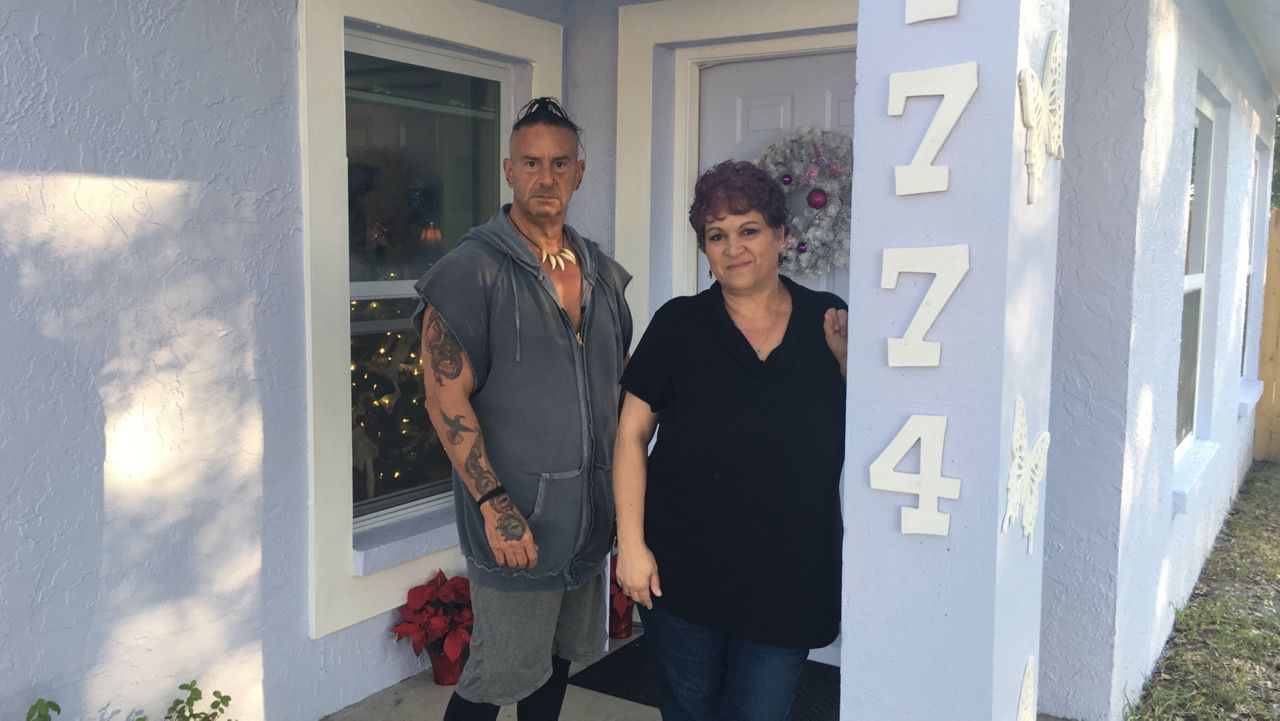 Joey and Sharon Licalzi bought the Lutz, Florida home where most of the movie "Edward Scissorhands" was filmed 30 years ago. Longtime fans, Sharon said she cried when she learned they would be the new owners. (Sarah Blazonis/Spectrum News)

1 of 9
Joey and Sharon Licalzi bought the Lutz, Florida home where most of the movie "Edward Scissorhands" was filmed 30 years ago. Longtime fans, Sharon said she cried when she learned they would be the new owners. (Sarah Blazonis/Spectrum News) 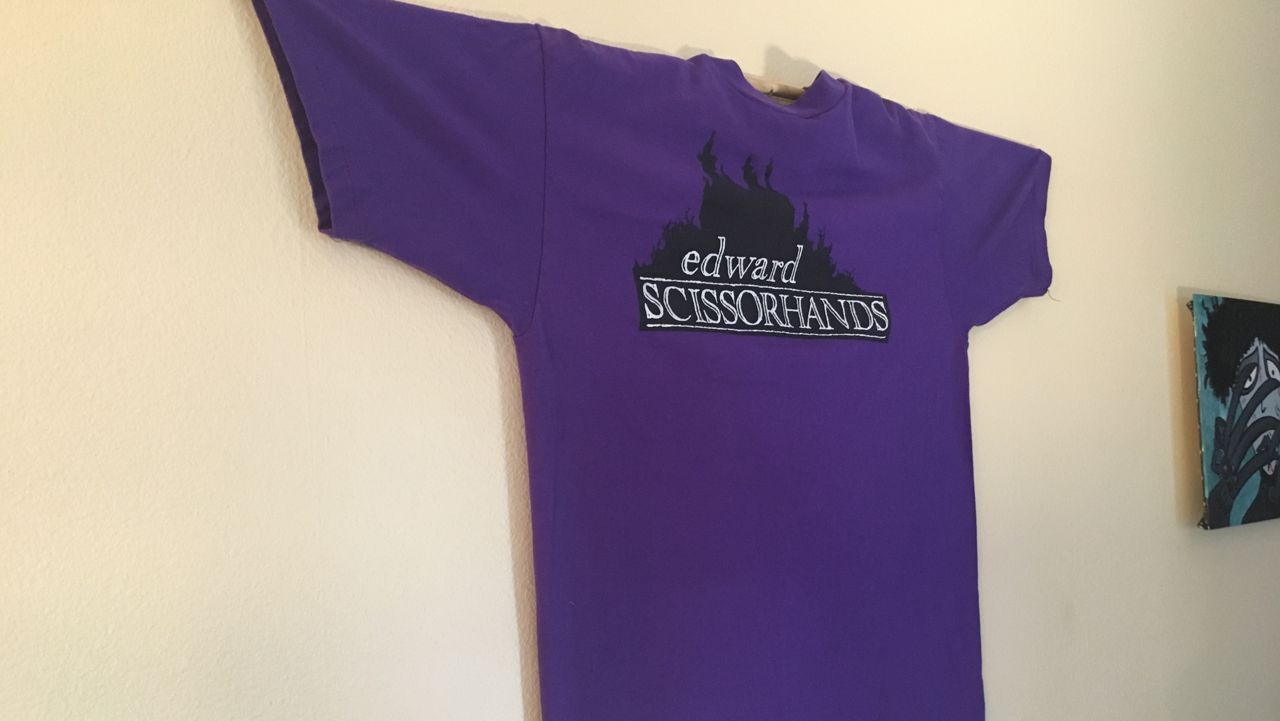 2 of 9
The Licalzis, who bought the Lutz, Florida home where "Edward Scissorhands" was primarily filmed 30 years ago, were given this T-shirt by a neighbor, who told them it was a souvenir for residents of the neighborhood after filming wrapped. (Sarah Blazonis/Spectrum News) 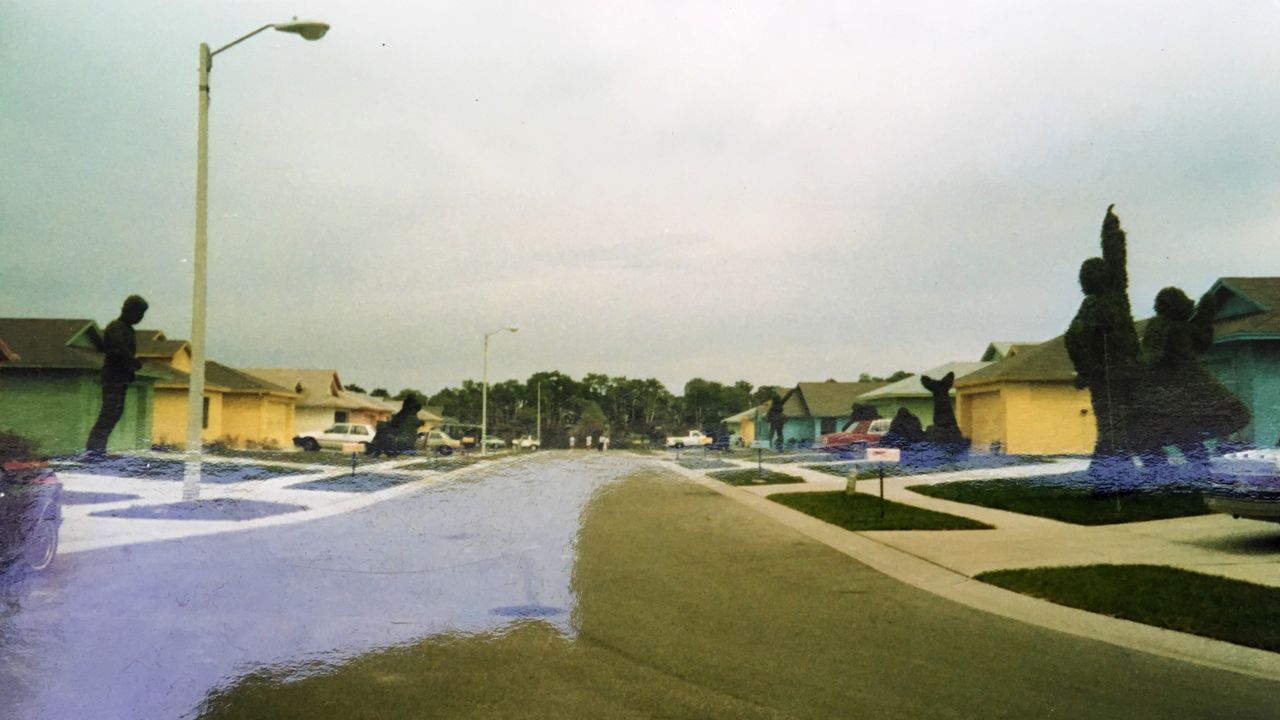 3 of 9
The Lutz, Florida neighborhood where "Edward Scissorhands" was primarily filmed 30 years ago. At the time, the homes were painted in pastel colors, and topiaries added in front of some of the houses. (Courtesy of Greg Holmes) 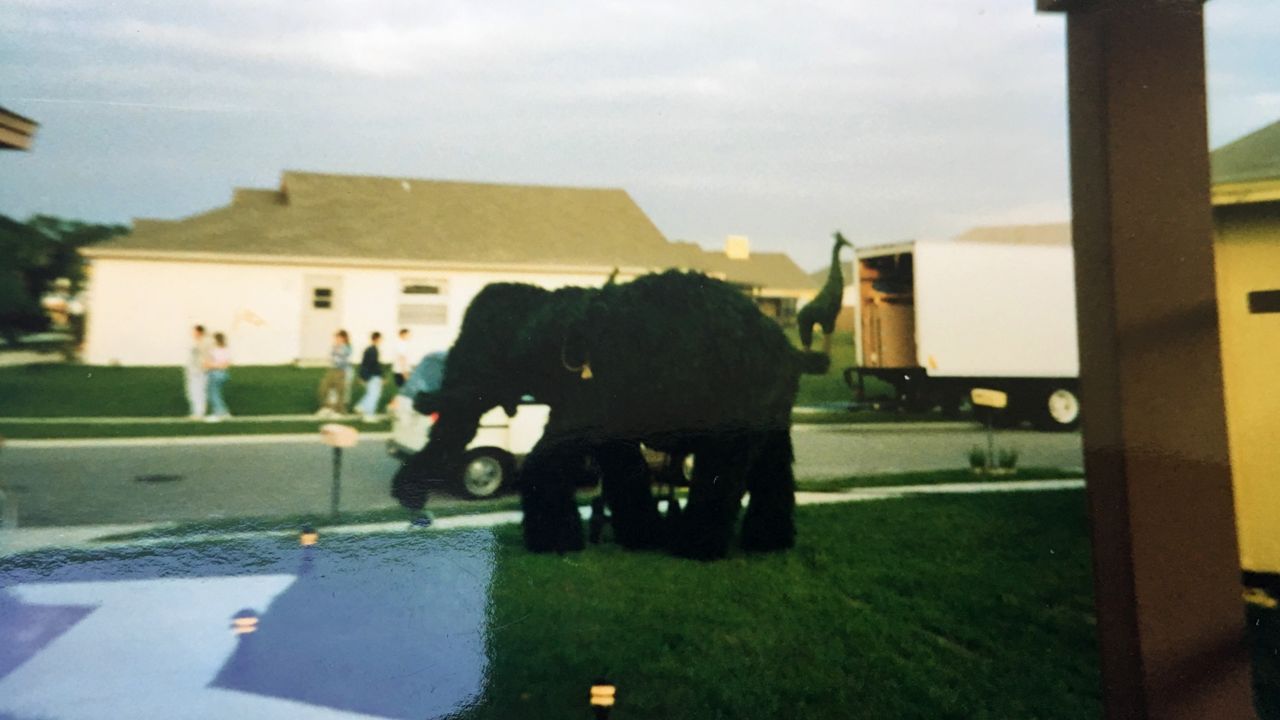 4 of 9
A topiary in front of a home during principal filming of "Edward Scissorhands" in the Lutz, Florida neighborhood of Carpenters Run 30 years ago. (Courtesy of Greg Holmes) 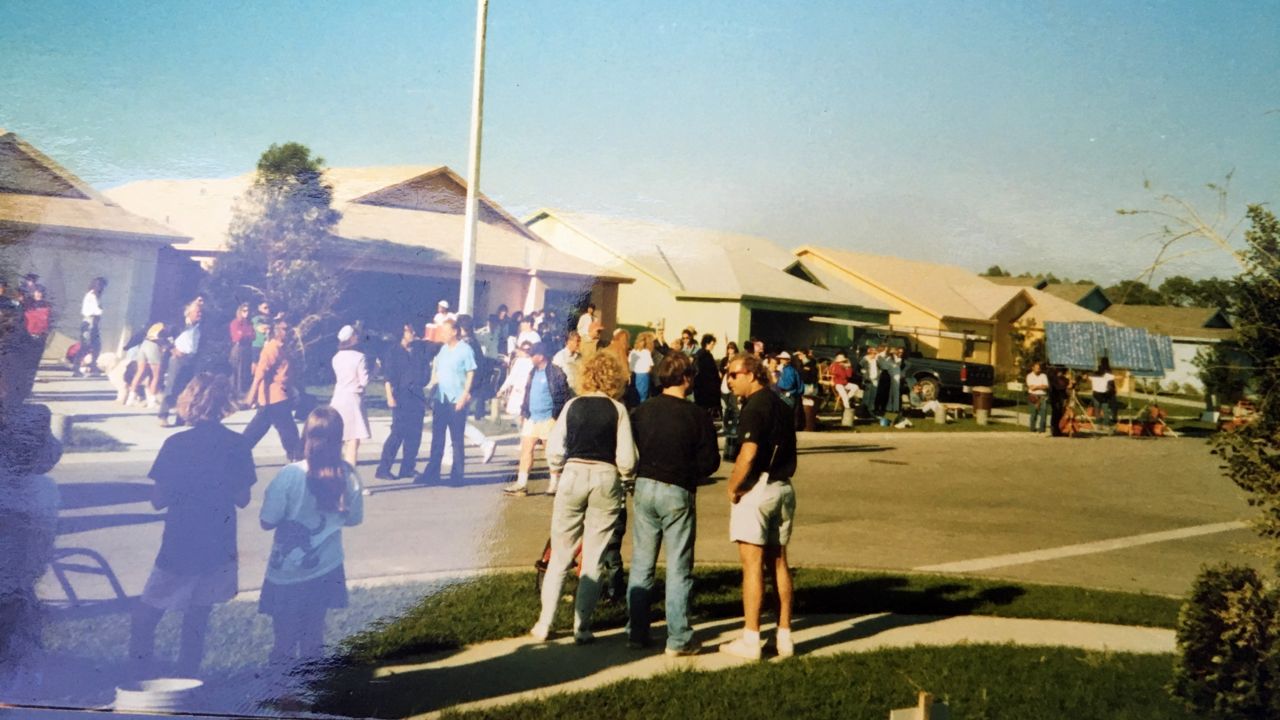 5 of 9
People gather in the Carpenters Run neighborhood of Lutz, Florida 30 years ago, where principal filming for "Edward Scissorhands" took place. (Courtesy of Greg Holmes) 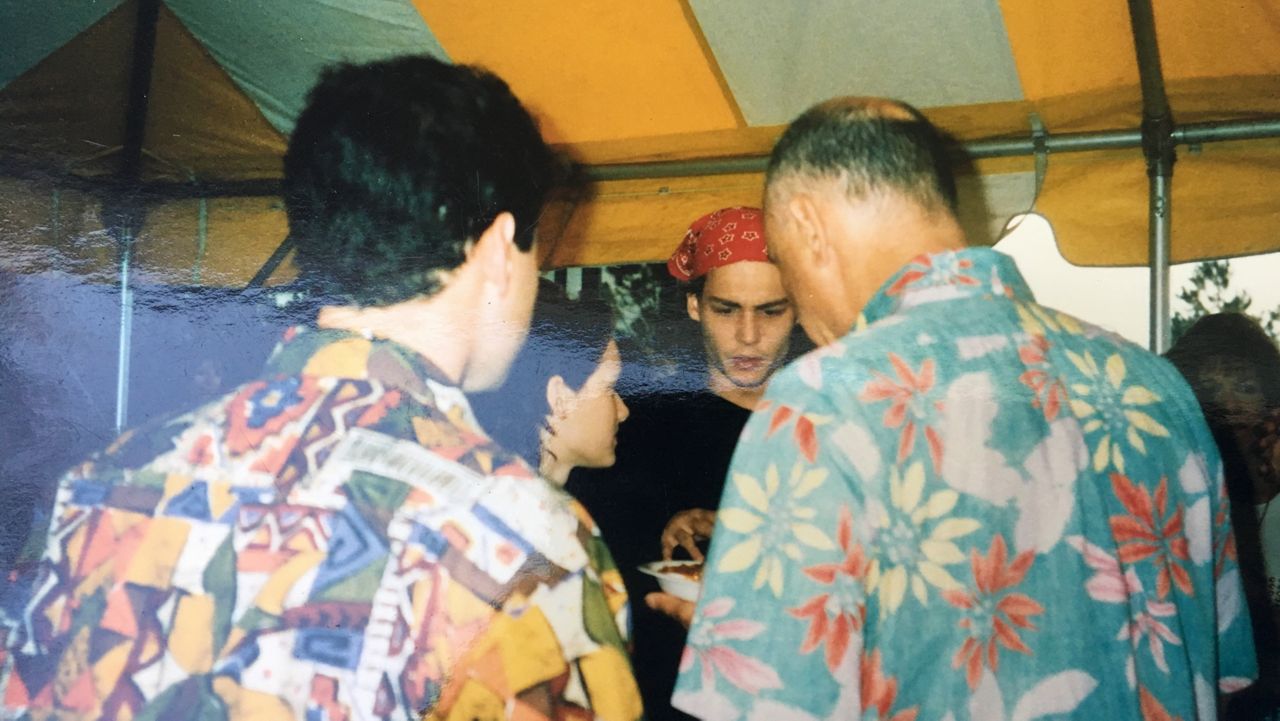 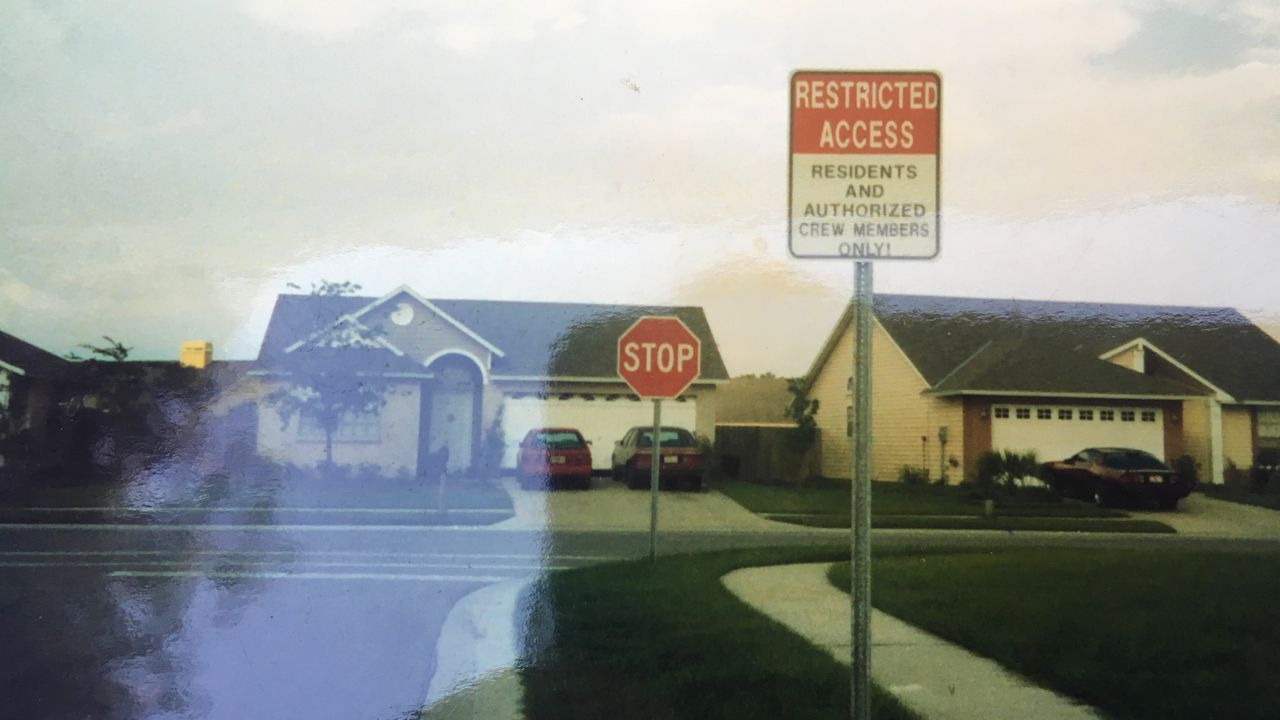 7 of 9
The Carpenters Run neighborhood of Lutz, Florida 30 years ago was the site of principal filming for "Edward Scissorhands." A sign in the subdivision at the time restricts access to the street. (Courtesy of Greg Holmes) 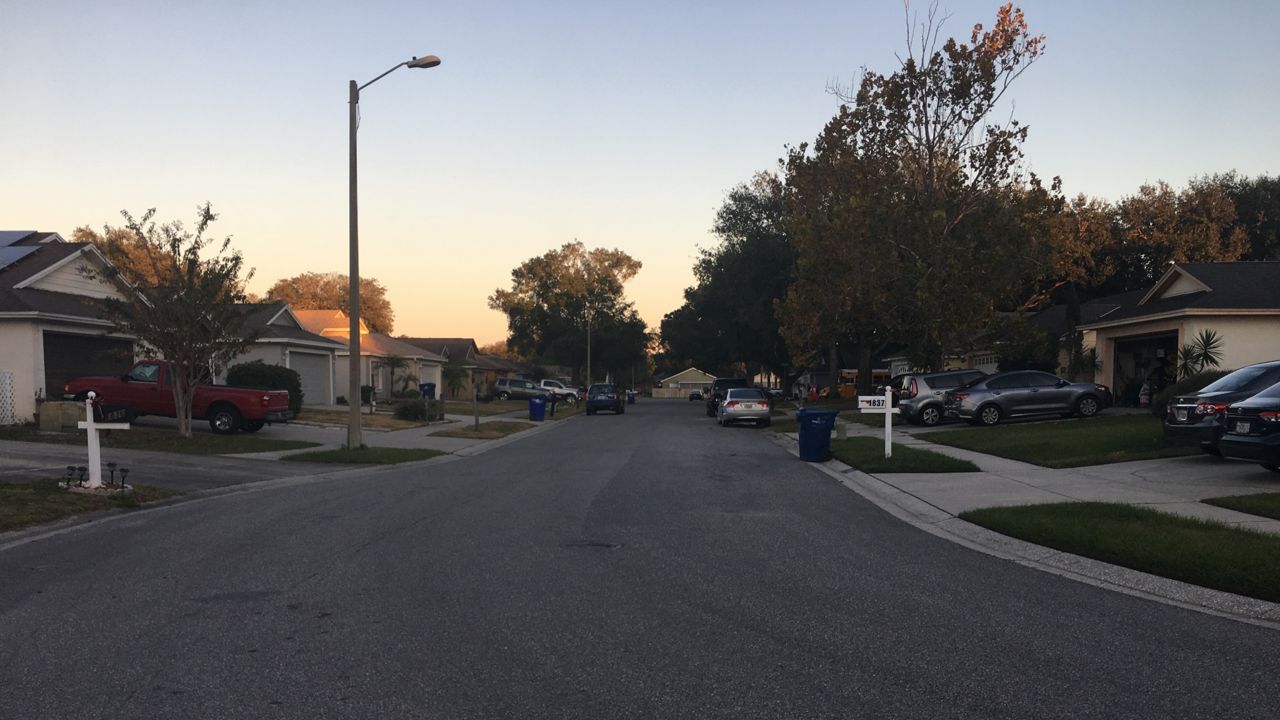 8 of 9
The Carpenters Run neighborhood in Lutz, Florida is relatively quiet today. But 30 years ago, it bustled with movie crews, when principal filming for "Edward Scissorhands" took place there. The home on Tinsmith Circle still draws movie fans. (Spectrum News) 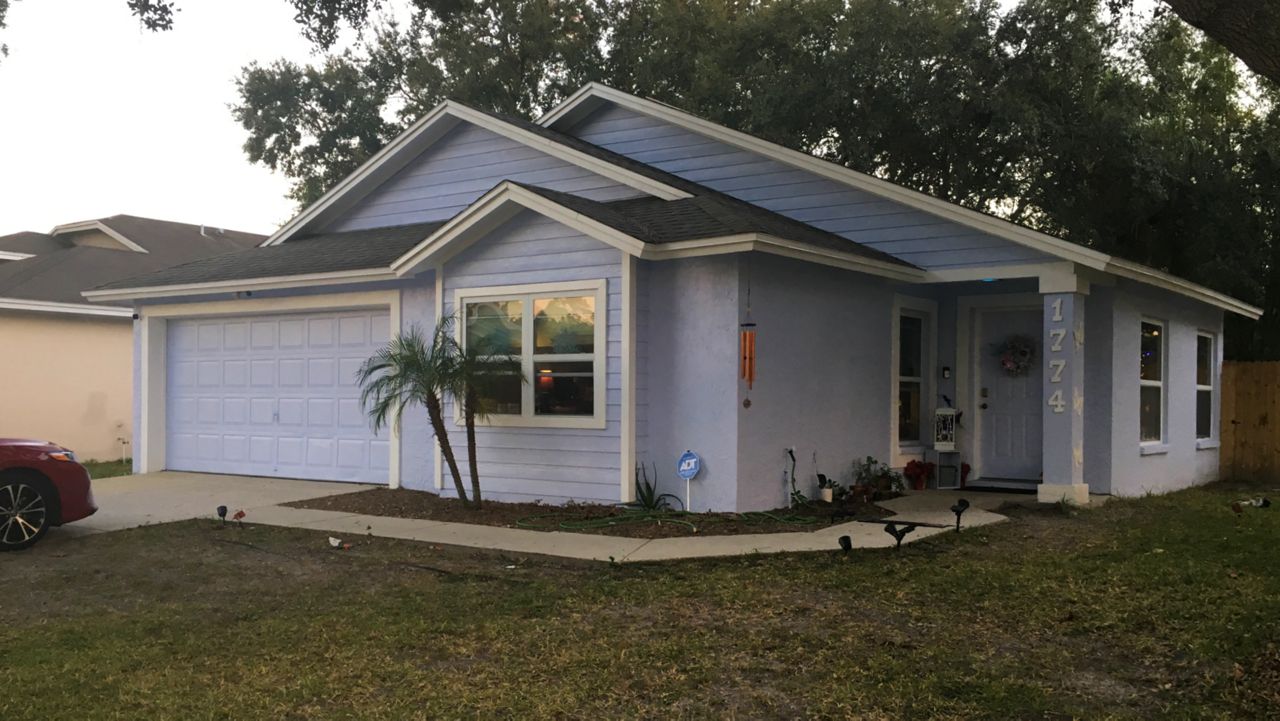 9 of 9
The Lutz, Florida home where "Edward Scissorhands" was primarily filmed 30 years ago. A couple who is fans of and has a connection to the movie recently bought the house in the Carpenters Run neighborhood. (Spectrum News)

LUTZ, Fla. — Before Tim Burton's movie Edward Scissorhands became a cult classic and holiday favorite, the production — like the film's titular character himself — was in search of a home. It found one in Tampa Bay, with filming taking place around the region.


One of those locations was the Carpenters Run neighborhood of Lutz.

The movie tells the story of Edward, the creation of a mad scientist who dies before he's able to replace Edward's scissor hands with human hands. Edward falls in love with Winona Ryder's character Kim, whose family takes him in.

“People were very excited, because (production) did come to this area, so they used a lot of local people as extras. Then you had (other) people, craft services and things like that," said Pasco County Commission Chairman Mike Moore, who was a college student at the time.

Moore said he made his first trip to Pasco County in 1989 to shoot a blink-and-you'll miss it extra role as a member of a TV news crew.

“I had the opportunity to sit down with Johnny Depp for probably a good hour and a half between takes while we were getting out of the heat into one of the homes that had air conditioning," Moore recalled. "It was funny because he left all his gear on, and I say his gear — his costume, I guess you could say — the scissor hands and everything. He and I are sitting right next to each other on the floor in this house, and we just had a great conversation. It was pretty neat," Moore said.

At the time, Joey Licalzi was a dish washer at a Wesley Chapel restaurant. He said one day, his manager asked if he'd want to wash dishes that came from the set.

“I said, ‘Yeah, sure.’ And the van pulls up and the doors open, and I just was in shock when I saw what I had in front of me," Licalzi said of his reaction to seeing how much work lay ahead.

It was that connection to the film that Licalzi and his wife, Sharon, said they think helped make theirs the winning bid when the house used as the home of the family Edward stays with came on the market earlier this year.

“When I walked through those doors, she was sitting on that chair, and people were coming here just to see the house. We were coming to buy the house. We were the first people to put the offer in. But, I walked in and I said, ‘You know, I have a bizarre connection to the movie.’ And she said, ‘What?’ I go, ‘I was the dish washer for the movie staff.’ And the connection was instant," Licalzi said.

When Sharon Licalzi learned they would be the new owners of the home, "I cried," she said.

"It’s acceptance and it’s love, and it’s just so neat to be a part of," she said of the film. "We’ve said that we’re privileged, blessed, is the word that was told to him, and that’s how we feel.”

Of course, the film also had an impact far outside Carpenters Run.

“I remember just being absolutely entranced by the sequences with the snow at the end and also thinking about how sad Edward was," said Amanda Firestone, a professor of instruction in the University of Tampa's Department of Communication, of the first time she saw the film. “It just kind of grew as a perennial favorite, because we tend to think of it not as a Christmas movie, but sort of a holiday favorite, in large part because of the timeline on it.”

Firestone said the film further established some of the elements that have come to be expected from Burton's work, like the use of dark clouds, snow, and the way he utilizes shadow, darkness, and light. As for whether the film could be considered "classic," Firestone said time will tell.

"And really, it’s the emotional triggers for the film that give it its heart, right? It is about that unfettered vulnerability that Edward has, and it’s about that growth and question of morality in both him and the other characters and the desire to understand what it means to be sweet and naive and open in a world that is uncomfortable and harsh and cruel. And those are the kinds of things that audiences are prepared to accept year after year, decade after decade," Firestone said.

The Licalzis said they want to preserve the history of the film in Pasco. They painted it a light purple, which looks like the pastel blue of the house in the movie. Inside, it's decorated with "Scissorhands" art work and memorabilia sent to them by friends and fans. They've even modeled parts of the kitchen to make it look just like it did in the film.

Both said there's no shortage of fans stopping by the property to get a look at movie history.

“It’s amazing to see that, yes, maybe it was just a little thing 30 years ago, but now the movie is so huge.”