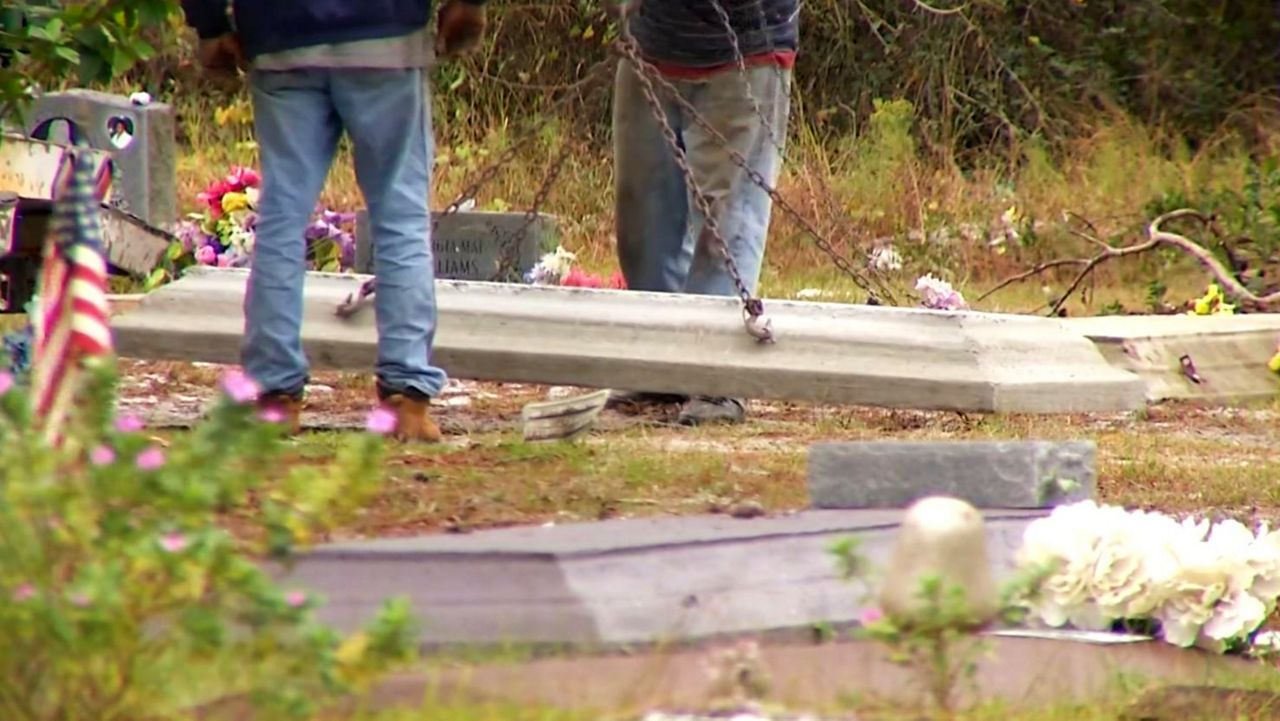 The thefts from Mount Dora's Edgewood Cemetery happened in early December. Investigators found that someone had broken into vaults and stolen human remains from several graves. They said evidence at the scene indicated that the vandalism was part of a ritual carried out by multiple people.

They also recovered the cigars.

DNA obtained from the cigars was submitted to a database, and one sample matched Tolentino's, Lake detectives say.

On Wednesday, they reached out to the Polk County Sheriff's Office, which obtained a search warrant for mouth swabs from Tolentino for comparison.

When Lake detectives met with Tolentino, they said he confessed to going to the cemetery with Lopez, using a crowbar to open the vaults, and taking four skulls to Lopez's home.

On Thursday night, detectives searched Lopez's home, where they said they found six skulls, a hand, partial arm, and other large bones near what appeared to be a religious shrine.

Lopez told them four of the skulls were from Edgewood Cemetery, detectives said. The two other skulls were given to Lopez by other practitioners.

In a news conference Friday, Polk County Sheriff Grady Judd said the men, who practice a religion similar to Santeria called Palo Mayombe, told them "spirits" led them to the Mount Dora cemetery the night the graves were vandalized.

The men said they intentionally targeted the graves of veterans because the spirits of "heroes" are stronger.

They had to perform a ritual before removing the skulls from the graves, which included smoking a cigar and leaving orange peels in the graves.

Three of the four bodies whose skulls were taken were military veterans, including one who served in the Marine Corps and was buried in his dress uniform, Judd said.

"It rips my heart out to think that the graves of these veterans, these heroes, were disturbed for the purposes of creating the Palo shrine," Judd said.

One skull that is still unidentified suggests that another cemetery was also targeted, he said.

Lopez has no criminal history but runs an after-school-care program at a karate center and is a former Puerto Rico law enforcement officer, Judd said. He said Lopez was a "tata," or religious leader, and indicated on social media that cemeteries were holy sites and "shopping centers."

Judd said investigators at this time aren't aware of anyone else involved in the grave-robbing.

"Only the two of them were led by the spirits that night, according to them," Judd said.

The investigation into the plundered graves is ongoing. After it's complete, the Medical Examiner will return the remains to the families to be reinterred.

"It's never OK to violate the law in order to practice any religion," Judd said.

Both men have been charged with four counts each of disturbing the contents of a grave and abuse of a dead body. They're being held in the Polk County Jail on bonds of $40,000 each.

A photo provided by the Polk County Sheriff's Office shows what authorities say is a shrine for the Palo Mayombe religion discovered by detectives investigating the desecration of veterans's graves in Mount Dora. (Courtesy of Polk County Sheriff)