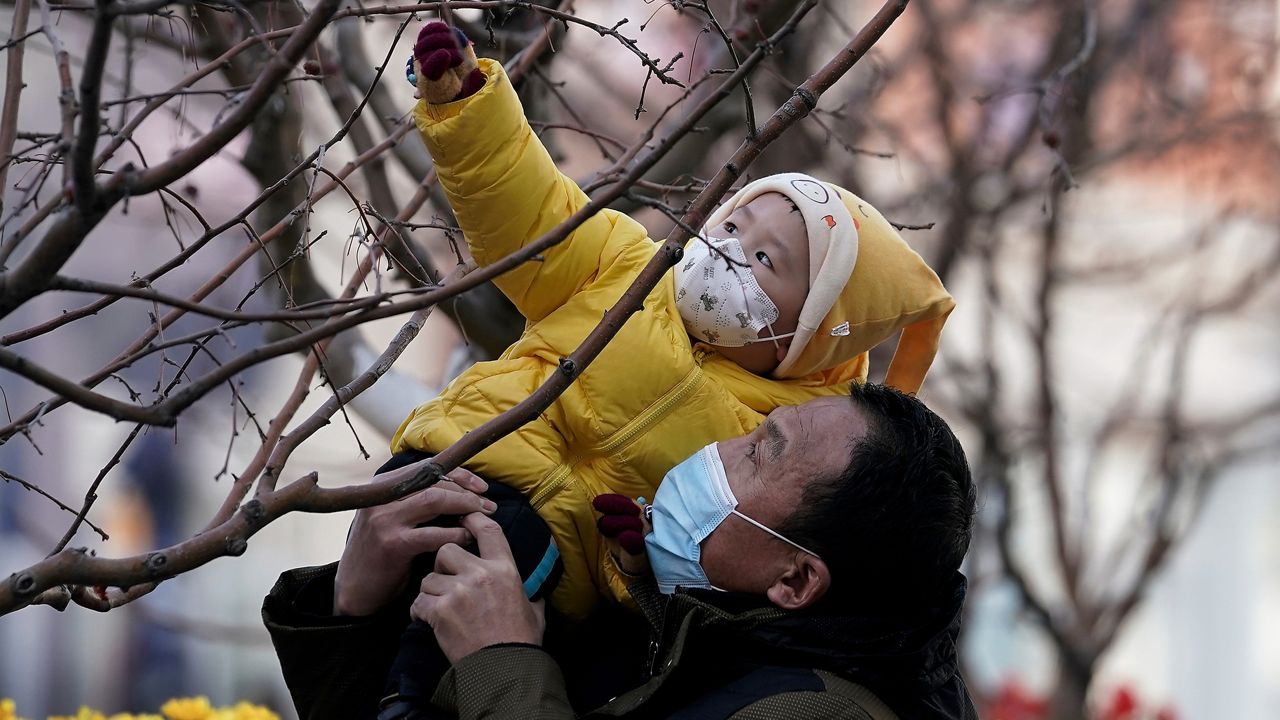 A man holds up a child, both wearing face masks to help curb the spread of the coronavirus, to reach out a tree branches at the Wangfujing shopping district in Beijing, Monday, Jan. 18, 2021. (Andy Wong/AP)

GAINESVILLE, Fla. – University of Florida researchers teamed up with investigators from China to analyze the spread of COVID-19 within households. Among their findings: an age group that's less susceptible to the virus may be more likely to spread it.

"That was quite surprising, even to us," Dr. Yang Yang, an associate professor of biostatistics at UF and one of the study's authors said of data regarding children.

"Household transmission of SARS-CoV-2 and risk factors for susceptibility and infectivity in Wuhan: a retrospective observational study" was published in The Lancet Infectious Diseases. Researchers analyzed contact tracing data from 27,000 households in Wuhan, the first epicenter of the virus, collected between Dec. 2, 2019, and April 18, 2020. It showed that people younger than 20 were 60% more likely to spread COVID to members of their household than those 60 and older. "Households" as defined in the study weren't not only people who lived in the same house, but also family members and other close contacts.

"We know children shed virus at the same level as adults. However, children, indeed, had closer contact with their family members," said Yang.

The study also found asymptomatic people were 80% less likely to spread the virus to others.

Yang said it's also important to note those who developed symptoms were much more infectious in the pre-symptomatic phase. The study's authors wrote that results show the importance of isolating and quarantining, but Yang said it's tough to detect COVID-positive people in the incubation stage.

The study states results can be used in modeling to predict the pandemic's trajectory and put measures into place to slow the spread.

"The relatively high infectivity of children in households should be considered carefully when making decisions around school reopenings, as infected children can pass the virus to their family members," the study reads.

According to Yang, it can also play a role in vaccine prioritization.

"Currently, vaccines have not been licensed or permitted to be used in children. So, we need to vaccinate adults taking care of children," Yang said.

Yang also said the data suggests a need for pharmaceutical companies to focus research on the safety and efficacy of the COVID vaccines in children.