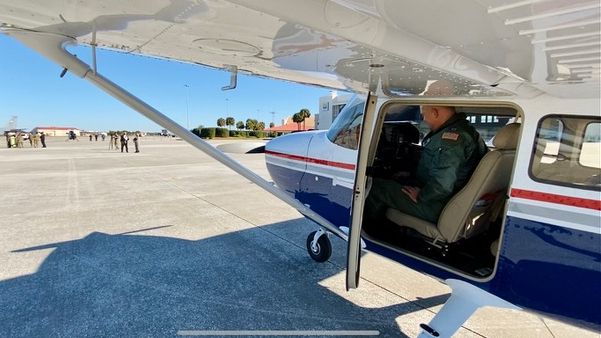 Authorities will use helicopters, airplanes and other aircraft to keep a close watch of the skies around Tampa, as well as an eye on what is happening on the ground. (Sky 9)


When it comes to ensuring safety for an event as large as the Super Bowl, what you can expect is a lot of agencies working together both in front of and behind the scenes.

“I’ve been flying on and off since the early 90s,” said Civil Air Patrol Captain Greg Becker.

When he’s not working his day job in emergency management, Becker volunteers with the Civil Air Patrol.

“The customs and border protection folks will be out flying the intercept missions during the Super Bowl. We work with them during their training and provide them tracks of interest, targets of interest for slow flying aircraft to simulate what they might encounter from a general aviation pilot who’s not aware of the temporary flight restriction and unwittingly flies into the airspace,” he said.

It’s a lot of work, but it’s just one pice of a larger puzzle.

Tonight on @BN9 we take a closer look at how @NORADCommand is teaming up with agencies like the @CivilAirPatrol to ensure safe skies at the Super Bowl. pic.twitter.com/zJqbk3VNLM

Tampa Police, the FBI, FAA, Customs and Border Protection, and the Civil Air Patrol are partnering with North American Aerospace Defense Command - or NORAD - to protect the Bay Area.

“What we do here at NORAD is, we have air defense sectors that use radar, fighter air craft, and other means to get an early warning notification to make sure that if anyone is coming inside of our borders, we know about it,” said Lt. Col. Alex Edwards the Commander of the 125th Fighter Wing Alert Detachment 1.

The 6th Air Mobility Wing at MacDill will be refueling the B1, B2, and B52 that will be used to fly over Raymond James.

On the ground, the FBI will gather and analyze intelligence data in real time to pass out to units in the field.

“We’re looking at everything from human trafficking all the up to and including counter terrorism and all we ask is tell someone,” said Ronald Hopper the FBI Assistant Special Agent in Charge of the Tampa Division.

In the meantime, for Becker it’s an opportunity to do what he loves while helping to protect his community.

“This is another way to give back to the public and make an impact, make a difference in the local community as well as on a national level,” he said.

When it comes to safety, authorities are also strongly reminding people to leave their drones at home.

A temporary flight restriction will be in place and civil penalties could exceed more than $30,000.