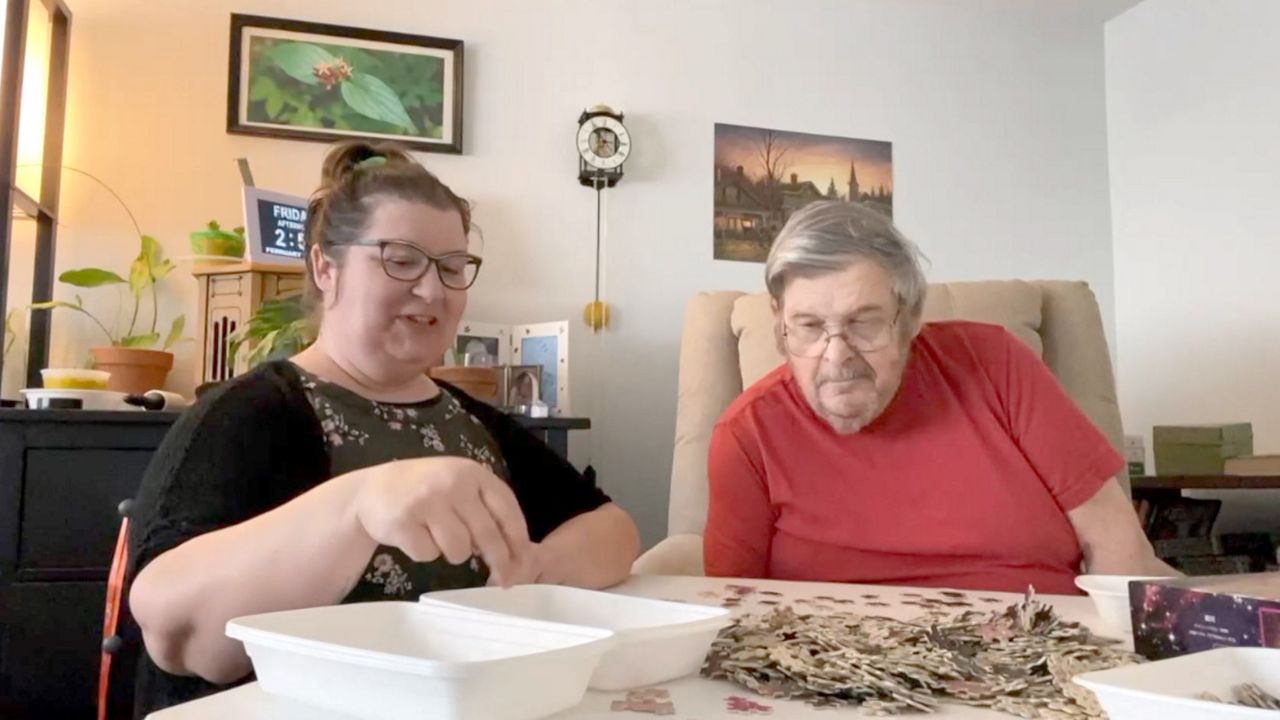 Merritt Island resident Cheryl Buehler takes care of her 76-year-old father, Randy, around the clock, but is not eligible to get a COVID-19 vaccine as part of Phase 1a. (Spectrum News 13)

WASHINGTON — Medical workers and first responders have been prioritized for vaccines across the country, but many unpaid family caregivers have been overlooked.

Less than half of states in the U.S. mention caregivers in their vaccine distribution plans, leaving millions caring for vulnerable aging family members unprotected from the virus.

“I don’t fit in any category that is at any point mentioned in the line of people who can get one,” said Cheryl Buehler, a family caregiver from Meritt Island.

Buehler provides around the clock care for her 76-year-old father, Randy. While she has many of the same responsibilities as a professional health care worker, she is not eligible for a vaccine in the state of Florida.

Randy’s limited mobility, advanced Alzheimers, and other medical issues have made getting him a vaccine logistically impossible. Now, Buehler is forced to face a grim reality — what would happen to her father if she gets ill?

“In some ways, it seems more important for me to have one than him because I’m the one, in theory, going out, doing things, picking up things, taking him places," she said. "If I’m at risk, I’m not able to help him at all."

Buehler isn’t alone. According to AARP, around 50 million Americans take care of sick or at-risk family members. Most are unpaid and don’t know when they will be able to get vaccinated.

“This eligibility thing we do in this country really makes things very difficult for people,” said Dr. Maggie Ornstein, a Caregiving expert and a professor at Sarah Lawrence College.

Ornstein, who cares for her mother, said every time a caregiver gets sick, it increases the burden on the country’s healthcare system.  While a few states have moved family caregivers into Phase 1a of their vaccine rollouts, she said that isn’t nearly enough.

'The CDC needs to update their guidelines to include family caregivers,” Ornstein said.

"Their recommendations, the states don’t have to listen, but at the federal level that needs to happen," she added. "Then, states need to include family members as healthcare workers and essential workers."

Until then, unpaid caregivers like Buehler remain in limbo. She said she’ll take every precaution she can to keep herself and her father healthy.

“In the grand scheme of things, he and I are all each other have. I’ve got him and he’s got me and we are just trudging forth, trying to do our best,” Buehler said.