Two powerhouse programs squared off in the NCAA Women's Basketball tournament, with Stanford bringing the Pac-12 conference its first championship since 1992.

On Monday, the men's college basketball season will end with two juggernaut college programs fighting for the title.

Sunday saw No. 1 Stanford beat No. 3 Arizona in a game that came down to the final seconds, with the Wildcats missing their final shot of the game.

On the men’s side, after a stunning buzzer-beating, barn-burner win Saturday over No. 11 UCLA to keep their undefeated season alive, No. 1 Gonzaga will take on No. 1 Baylor, who routed No. 2 Houston to advance to their first national title game since 1948.

It’s not often the undisputed two best teams face off against one another in the NCAA tournament — over the last two seasons, Baylor has lost only six games; Gonzaga, only two.

After a long wait, fans will be treated to the powerhouse matchup they were denied in December due to the COVID-19 pandemic, but with the highest stakes in the sport on the line. 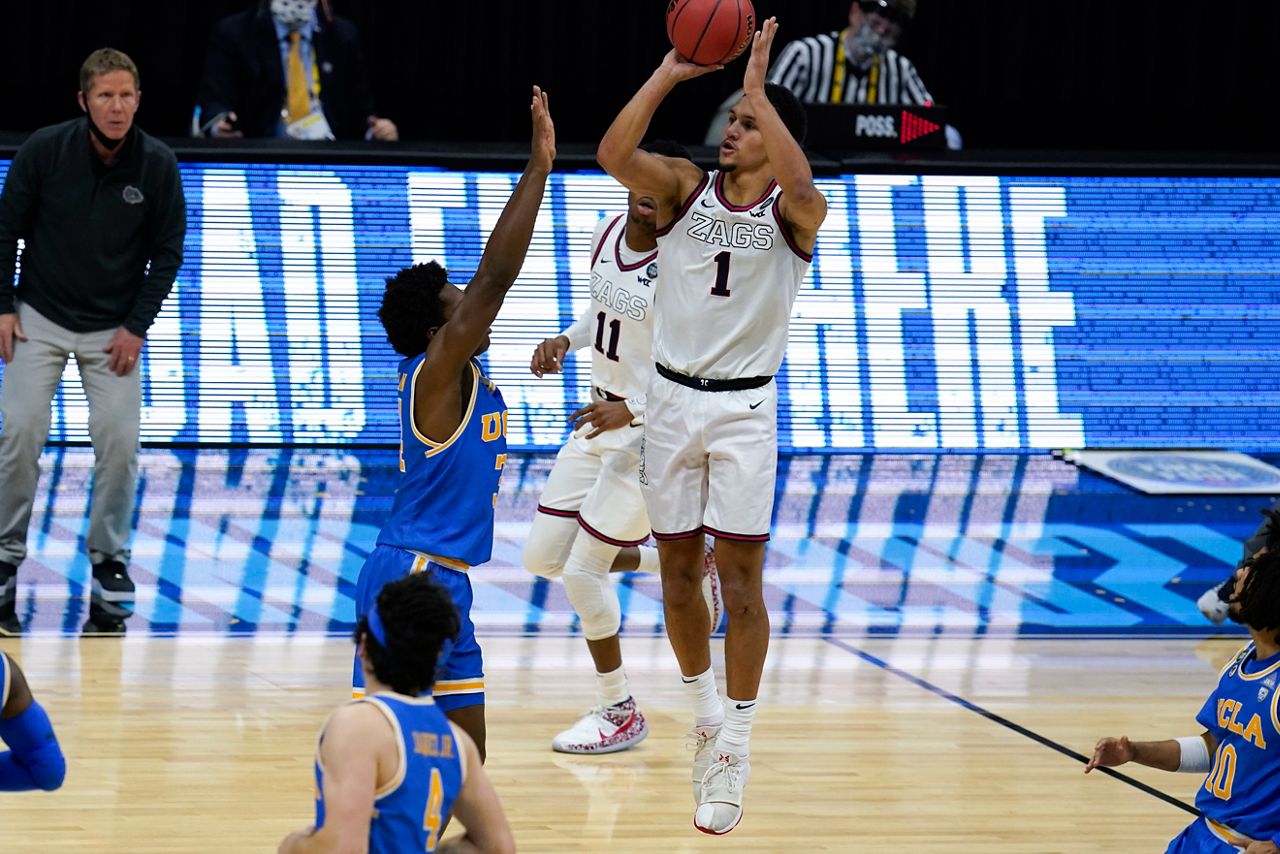 How close did this premiere powerhouse matchup come to not happening? A buzzer-beater with less than 1 second on the clock in overtime.

At the end of overtime — in a game that featured 15 ties and 19 lead changes — down two points, UCLA’s Johnny Juzang missed a floater, got his own rebound, and tied the game up at 90 with a little over 3 seconds to go.

Gonzaga advanced the ball to freshman sensation Jalen Suggs, who pulled up from just beyond half-court — and he called game.

The shot banked in, the Gonzaga coaches and players cleared the bench and stormed the court, and UCLA’s Cinderella run to the Final Four ended right then and there.

The shot, and the game itself, received accolades from basketball’s finest — including “the King” LeBron James himself.

I said SUGGS about to hit this as soon as he crossed half court. GAME!!

“It was nuts. I still can’t speak,” Suggs said. “I have a million things going on in my head. I just can’t believe that it happened.”

"I've always wanted to run on the table like Kobe or @DwyaneWade to celebrate."@zagmbb Freshman Jalen Suggs just hit the shot of a lifetime!#FinalFour | #UnitedWeZag pic.twitter.com/Jw5wAtLiHv

“We were lucky enough to hit a 50-footer,” Gonzaga coach Mark Few said. “So it helps when you have a magical, special guy like Jalen, special at the end of games.”

But UCLA, along with Juzang, who could be the NBA’s first Asian American lottery pick, received his fair share of props as well from noteworthy alumni, and even rival USC.

Tough way to lose, gut punch, but so proud of Mick Cronin and the @UCLAMBB.. Things to build upon..

@UCLAMBB We were planning on trolling you when you lost, but don’t have the heart for it after that.

Can’t imagine what that locker room must be like for those guys after the loss but UCLA and their entire program should be incredibly proud.

Many fans – including the King himself – called it the greatest game ever.

One of the best games I’ve seen in a very long time!!

What a great game. Fantastic effort by UCLA but a classic example of survive and advance. Jalen Suggs keeps the unbeaten season alive. Nothing like March Madness.

Take it from someone who has been watching college basketball since when the two handed set shot was popular, this was one of the best played and most exciting games I have ever seen. Down to the final shot. I’m rarely speechless but...

“At the end of it, you could tell how both staffs and all the players reacted that it was an all-timer,” Few added.

But not everyone felt the same way.

Gonzaga’s undefeated bid to win the title, the first since Indiana in 1976, is still in play Monday. 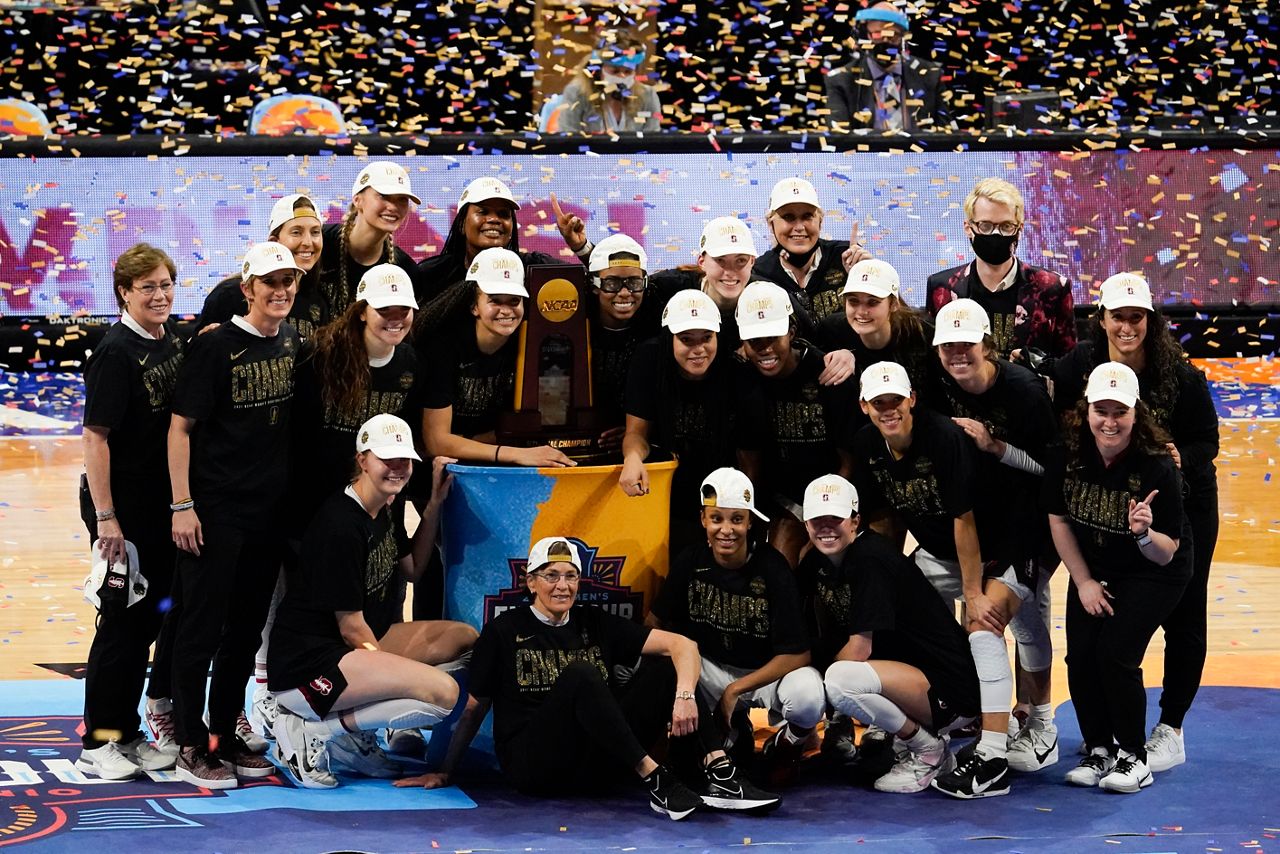 It wasn't a pretty game, with missed shots and layups abound, but when the smoke cleared, the Stanford Cardinals stood victorious, bringing the program, their Hall of Fame coach, and the Pac-12 conference its first title since 1992.

After a timeout, Jones answered with a three-point play with 2:24 left. That would be Stanford’s last basket of the game. McDonald got the Wildcats with 54-53 with 36.6 seconds left converting three of four free throws.

Stanford also became the first team in either the Women's or Men's NCAA Tournament to win both their semifinal and final games by 1 point in each game, according to ESPN.

The Cardinal, after another timeout couldn’t even get a shot off, giving Arizona one last chance with 6.1 seconds left, but McDonald’s contested shot from the top of the key at the buzzer bounced off the rim.

It’s been quite a journey for VanDerveer and the Cardinal this season. The team was forced on the road for nearly 10 weeks because of the coronavirus, spending 86 days in hotels during this nomadic season.

The team didn’t complain and went about their business and now have another NCAA championship. Along the way the Hall of Fame coach earned her 1,099th career victory to pass Pat Summitt for the most all time in women’s basketball history.

Now the 67-year-old coach has a third national title to go along with the ones she won in 1990 and 1992. That moved her into a tie with Baylor’s Kim Mulkey for third most all time behind Geno Auriemma and Summitt.

"I’m really proud of the Pac-12 to have two teams in the national championship game," the VanDerveer said prior to the game. "You know, this is not something that a lot of people could have imagined ... 10 years ago, 15 years ago, 20 years ago. And it’s really, really exciting."

Stanford was last in the title game in 2010, losing to UConn in the Alamodome — the same building the Cardinal will be playing in on Sunday night. The conference became the Pac-12 a year later after expansion. The league has had six different schools in the Final Four since 2013, but none reached the title game until Friday night when both Stanford and Arizona advanced.

“In the Pac-12 we’ve been saying all along we have the best teams in the country and to have two Pac-12 teams speaks for itself,” Arizona coach Adia Barnes said. “Stanford won the Pac-12 championship and we were second. Both of us in the Final Four and championship game, it means a lot for our conference.”

Barnes and VanDerveer are close, with the Arizona coach considering the Stanford stalwart a mentor dating back back to when she was a player for the Wildcats.

"She’s an advocate for women’s basketball and I have the most respect for her," Barnes said of VanDerveer.

To get to Sunday night’s game the Cardinal held on to beat South Carolina 66-65 on a basket by Haley Jones with 32 seconds left Friday night. After Jones’ shot but the Cardinal up, Stanford survived two last-second misses by the Gamecocks.

McDonald has been a huge reason why. The 5-foot-6 guard, who is lightning quick, is one of the rare two-way players in the game who can impact contests on both ends of the court.

Sunday night’s game will pit two teams from west of the Mississippi against each other for the first time since 1986.

“It just means the world. I think I represent a lot of different things, but representation matters, opportunities matter. When we’re given opportunity, we can flourish,” Barnes said. “I was given an opportunity by an (athletic director) that believed in a young coach that had only been coaching five years. This is only my fifth-year as a head coach. I was a five-year assistant, a 13-year pro.

“Someone believed in me, saw something in me that maybe I didn’t even see in myself at the time.”

There have also been two Black men to have guide teams to the women’s Final Four. Quentin Hillsman led Syracuse to the title game in 2016 and Winthrop McGriff took Cheney to the national semifinals in 1984.

Only 13 Black women were head coaches at Power Five programs this season. Barnes said there is a perception that female Black coaches are just recruiters since a majority of their players are Black.

“We can recruit but we’re not only recruiters,” Barnes said before offering advice to other Black female coaches “Don’t allow yourself as a female, as a black female, to be pigeonholed into one thing. Learn, work on your trade, study, pull someone else along as a woman, as a woman of color. Aspire big, do big things. Don’t let yourself be pigeonholed in one thing.”