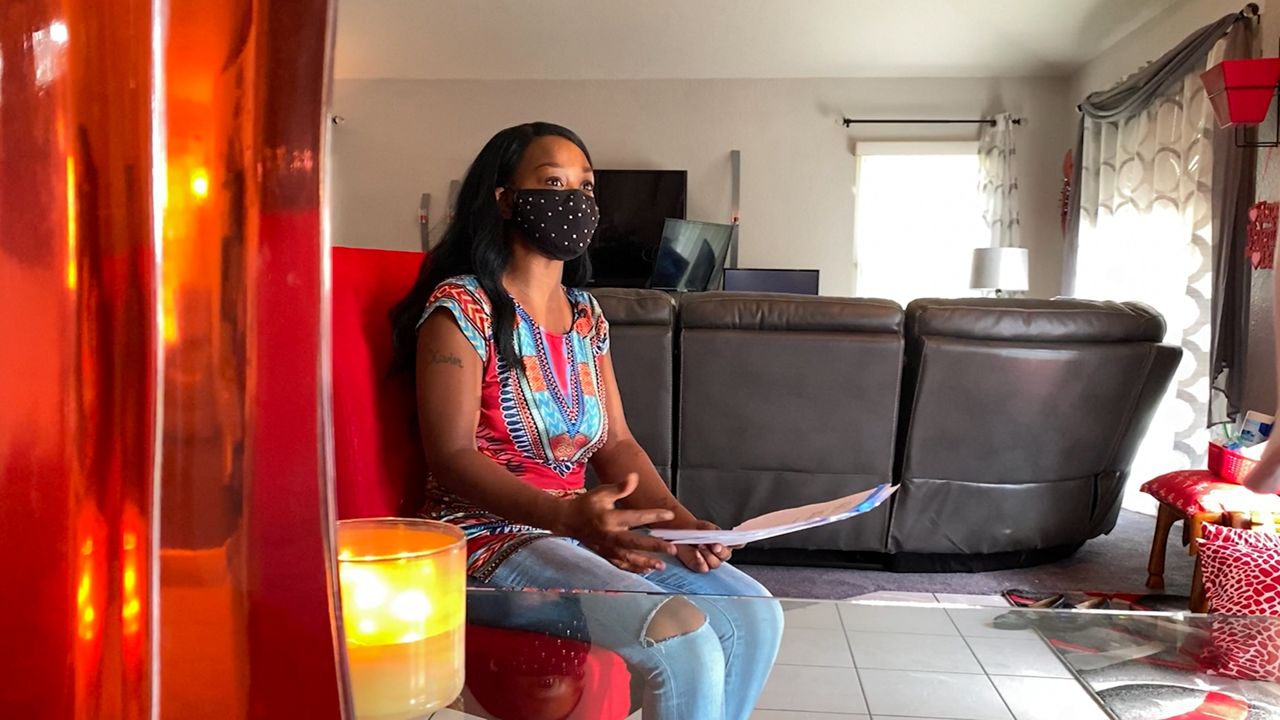 Polk County resident Sherita Harris was evicted from her apartment in December, but she may have been able to stay in her home if she had known about the CDC moratorium. (Spectrum News 13/Molly Duerig)

POLK COUNTY, Fla. — After months of confusion surrounding an unprecedented federal eviction moratorium that has frustrated renters and property owners alike, the Consumer Financial Protection Bureau has announced a new rule to strengthen the moratorium’s enforcement.

"This rule will help prevent further spread of the virus by requiring that debt collectors provide notice to tenants of their rights to stay in their homes during the COVID-19 pandemic,” Acting CFPB Director David Ueijo said during a Monday call hosted by the National Low Income Housing Coalition.

Housing advocates have for months been asking for improvements to the CDC moratorium, which doesn’t apply to tenants automatically, and doesn’t require landlords to inform tenants of the protections they may be eligible for under the order. In January, more than two thousand organizations joined the NLIHC in drafting a group letter to the Biden Administration, pleading for a stronger moratorium. The CFPB’s new rule appears to be an answer to that call.

For some renters who have already been evicted during the pandemic, the rule comes a bit too late.

Polk County resident Sherita Harris was evicted from her apartment in December. But she may have been able to stay in her home, had she known about the CDC moratorium earlier.

“I just assumed that everybody was protected,” Harris told Spectrum News in February. “I wasn’t aware that you had to go through these steps, and that there’s a special form to fill out.” The CDC provides a declaration form for renters to complete and provide to their landlords if they wish to seek protection under the moratorium.

At the time of her eviction, Harris had already received county-administered rental assistance from the CARES Act. That alone indicates she may have been eligible for protection under the CDC order, which requires renters to swear they’ve done their best to seek housing assistance from the government.

But Harris didn’t even get the chance to see if she qualified, she said, because Polk County court staff didn’t inform her of the moratorium until after she’d received her 24-hour notice to vacate the property. A Spectrum News investigation found Central Florida’s court jurisdictions vary in their interpretations of the moratorium, including how much information about the order should be provided to tenants facing an eviction.

“Clear instructions need to be made, people who are facing evictions, on what needs to be done,” Harris told Spectrum News in February. “And landlords, somebody needs to be held responsible or accountable for people being wrongfully evicted.”

That’s exactly the goal of the CFPB’s new rule, which relies on the Fair Debt Collection Practices Act (FDCPA) to hold debt collectors accountable for “engaging in eviction-related conduct” that violates that act.

The rule further explains that attorneys who engage in eviction proceedings on behalf of landlords or residential property owners may also be categorized as “debt collectors” under the FDCPA.

For her part, Harris is grateful for the rule. Although it won’t help her personally, she hopes it will help other renters facing a COVID-19 related eviction.

“I knew eventually something was gonna have to be done, because [the moratorium] just wasn't working,” Harris said. “But I am glad, moving forward, for other people.”

Molly Duerig is a Report for America corps member who is covering Affordable Housing for Spectrum News 13. Report for America is a nonprofit national service program that places journalists in local newsrooms to report on undercovered issues.