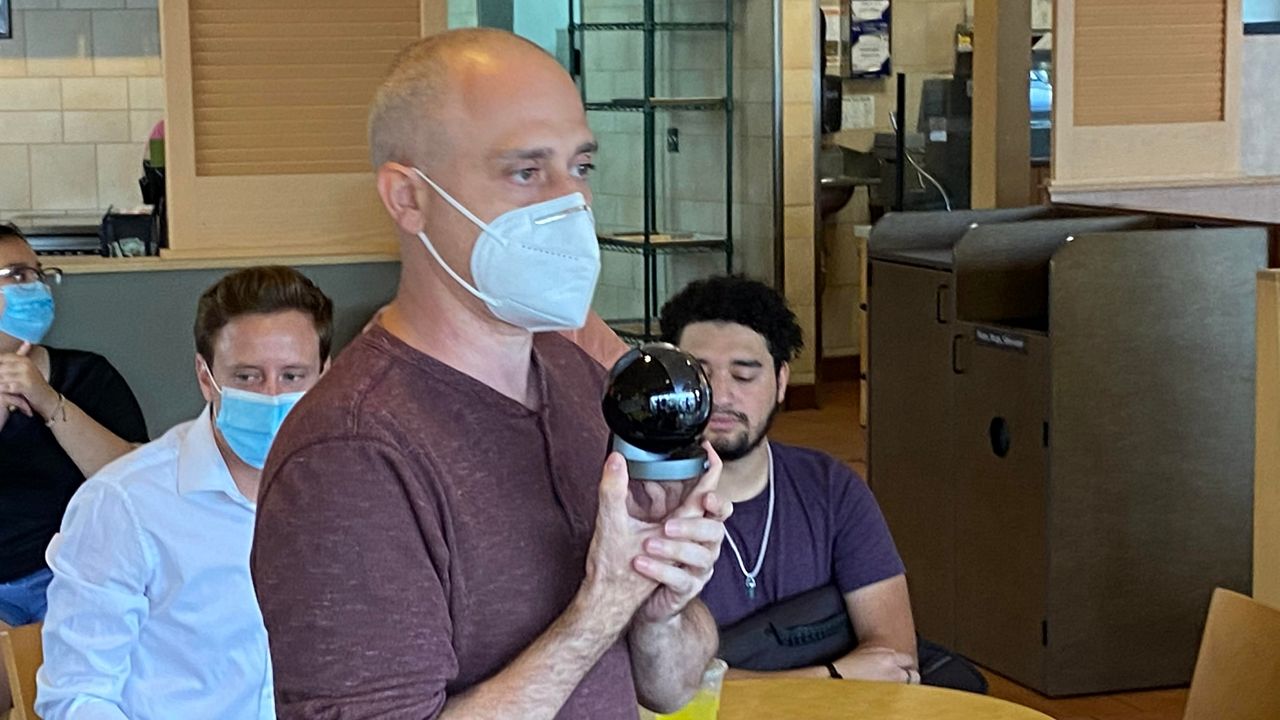 SPRING HILL, Fla. — Lots of people bring their work to Panera Bread, for a quick lunchtime PowerPoint pitch, or to browse the web over the free Wi-Fi while they’re supposed to be working on their novel.

Universal Paranormal founder and president Dominick Pepito might be pushing the envelope a bit, however. Rugged road cases packed with thousands of dollars’ worth of sensitive equipment sit stacked high, filling an entire booth; Pepito’s crew fills several more. Some take notes on laptops while others joke among themselves until he opens the first case, and captures their undivided attention.


An app-controlled lighting rig. A tablet-like device with a pistol grip. Audio recorders to capture electronic voice phenomena (EVPs). An orb that lights up and makes a sound similar to a theremin when the air around it is disturbed. Devices that measure electromagnetic frequencies. Handheld ultraviolet flashlights. Night-vision cameras that shoot in 4K ultra HD, the highest-resolution digital video.

Some of this equipment is familiar to some of them, while other pieces seem new or novel. Nearly all of the expensive, specially designed gadgets share the same purpose: to capture hard evidence of paranormal activity.

These are the tools of ghost hunters.

Pepito uses previous paranormal investigations he’s led as examples for many of these tools are used. Members of his audience listen closely and ask pertinent questions. The most questions are about the gear that doesn’t seem to be designed specifically for such investigations, like the new light—gear that seems more, ahem, geared toward video production.

Which it is, because Pepito’s vision for Universal Paranormal stretches far beyond going into the dark and finding the things that go bump in the night.

“We’re not Billy Bob’s Paranormal Investigations,” he says during a phone conversation a week or so after the training session. “We are a professional production network that uses state-of-the-art equipment to find, detect and explain paranormal activity… we’re creating six shows.”

Paranormal investigation is a popular reality-TV niche that has paid off handsomely for cable networks as diverse as Discovery, the History Channel, the Travel Channel, Syfy and A&E. Universal Paranormal’s six planned shows, which include concepts that run from takes on the traditional ghost hunts of famous locations in the U.S. and Europe to a reality competition and more theologically-based themes, will run, at least at first, on the organization’s own streaming service, PARAFlixx.

But that’s just one part of a plan aimed at making Pepito’s brainchild one of the largest paranormal entities in the world. He wants Universal Paranormal to be an online networking hub and clearinghouse for the entire genre.

“We have one of the largest international directories online—personalities and locations can actually sign up and register in the United States and throughout Great Britain,” he says. “Everyone who is part of the paranormal world, film directors, astrologers, psychics, mediums, historical locations, everybody can come together and really be a part of Universal Paranormal on a global scale.

“They can post their EVPs, their videos, their pictures, everything that they’ve experienced or captured all in one location. And our online store allows them to sell their items.”

Pepito is also planning on opening a museum of the paranormal in Spring Hill in September, around the time Universal Paranormal will host what he calls the largest investigation in the world.

Most recently, Pepito and Universal Paranormal worked with film students from the University of Tampa, giving them a crash-course in everything from ghost hunting to on-side production and video editing during and after a three-hour investigation of the university’s historic Falk Theatre.

“The producers contacted me, I put them in touch with the students to see if there was any interest in students interning with them,” says Dana Plays, chair of UT’s Film, Animation and New Media department. “He wanted to have a space to train students on the equipment. Because of COVID we needed a large space, so I thought maybe the Falk Theatre because it’s got a reputation for being haunted or whatever… Fortunately it worked out that there were two nights available.”

“I’ve never gotten so much evidence in a three-hour period in my life,” Pepito says.

The 44-year-old fell in love with the world’s unseen wonders when he was much younger, while tracing his family’s lineage in Italy and touring Europe’s many historic castles, crypts and religious sites. He’s passionate about sharing the excitement and intrigue he experiences when he’s on the hunt.

“I’ve been doing this for my entire life,” he says. “We find the things that are shining in the darkness.”