FILE - In this Jan. 27, 2018 file photo, Supporters surround a group who perform the Islamic midday prayer outside the White House in Washington during a rally on the one-year anniversary of the Trump Administration's first partial travel ban on citizens from seven Muslim majority countries. Organizations involved in refugee resettlement are awaiting President Joe Biden’s refugee admissions goal, set to be announced this month. (AP Photo/Andrew Harnik, File)

Shrunken under Trump, refugee agencies prepare for Biden's new cap: 'We need something to build toward'

Kristyn Peck and her team helped about 1,000 refugees move to the Washington, D.C. area by the end of 2017, the year former President Donald Trump took office.

By 2020, that number had plummeted to 40. With it went staff members, government funding and the community network that resettlement agencies like hers rely on to welcome refugees in the United States.

“It impacts everything,” said Peck, CEO of Lutheran Social Services in the D.C. region, a non-profit that resettles refugees and other immigrants. “All the infrastructure that supports the work was significantly scaled down.”

As the Biden administration solidified its refugee admissions goal for 2021, officials blamed the delay on a breakdown of the refugee processing system under President Trump, who set the cap at record lows year after year. Until Monday, when the White House confirmed a new goal of 62,500, Trump's historically small cap of 15,000 remained in place.

But despite the downsizing many have done in recent years, resettlement agencies say they’re prepared for the higher number — prepared to hire more staff, draw on their volunteer networks and accept referrals from the U.S. government, which also partly funds their work.

“We know that it's not a system that is like a faucet, where you can just turn it on and off,” Peck said. “But we need something to build toward.”

President Joe Biden promised to raise the admissions goal — both on the campaign trail and with an official notification to Congress  — to a number that accounts for the “unprecedented global need.”

On Monday afternoon, he set the refugee ceiling at a distant goal of 62,500 for fiscal year 2021, which ends Sep. 30, a number that the administration first proposed in February as half of Biden’s goal of 125,000 next year.

But officials first seemed to backtrack last month, announcing that President Trump’s record-low cap would stay in place. After immediate backlash, Biden officials reversed once again, promising a new, higher cap by May 15. 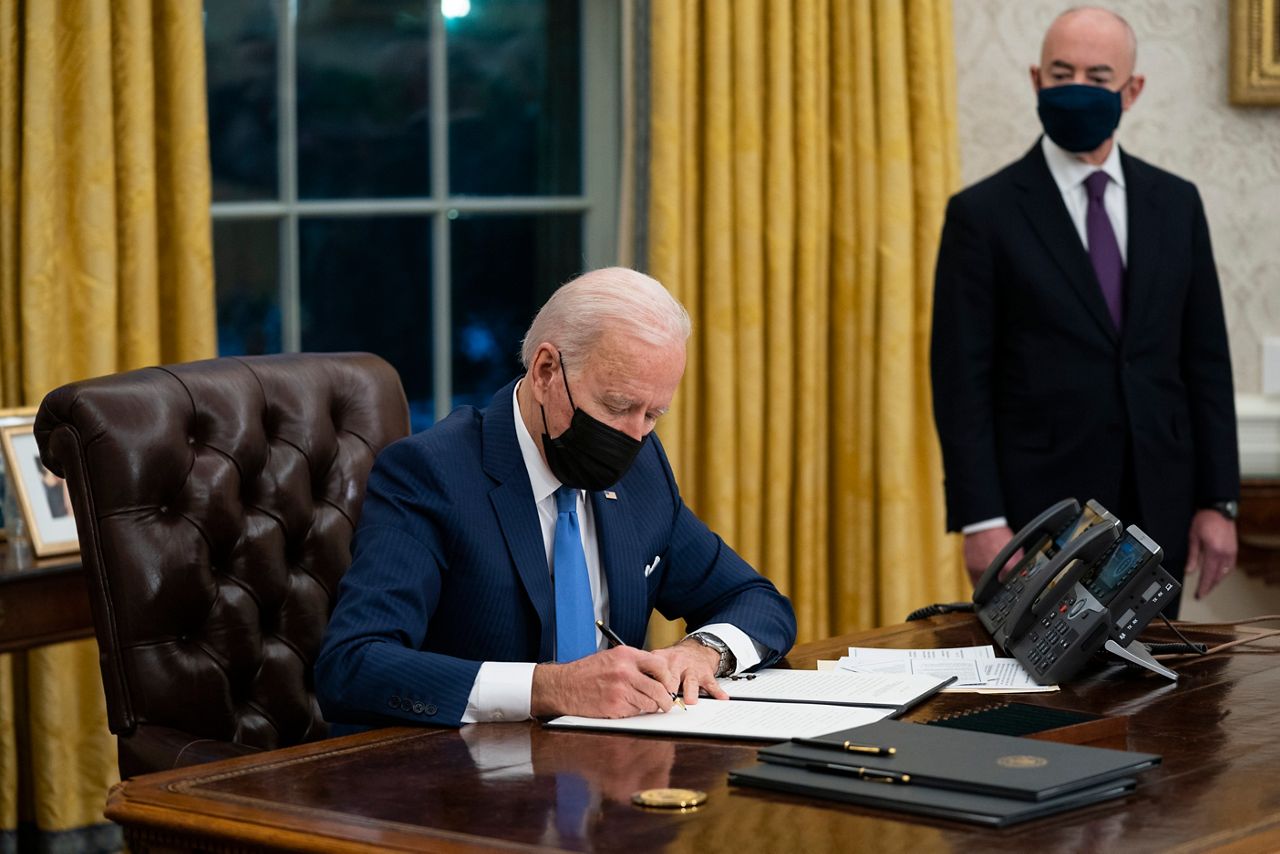 FILE - In this Tuesday, Feb. 2, 2021, file photo, Secretary of Homeland Security Alejandro Mayorkas looks on as President Joe Biden signs an executive order on immigration, in the Oval Office of the White House in Washington. Biden is expected to raise the refugee cap to 62,500, a number first proposed in February but then backtracked last month. (AP Photo/Evan Vucci, File)

'We're all sort of stuck'

“There were muscles that have been atrophied over the last few years,” said White House Press Secretary Jen Psaki in a March briefing, explaining that lower admissions under the previous administration impacted resources. “[The president’s] concern was, in part: Is that system prepared?”

The decline in admissions under Trump impacted the system both on the front end — the processing of applicants that happens abroad — and the back end — resettlement inside the U.S., a spokesperson for the State Department told Spectrum News.

“The previous administration’s restrictive admissions allocations that broke with a decades-long approach … negatively impacted the ability of our overseas Resettlement Support Centers to carry out refugee processing functions,” they said.

But advocates that work to resettle refugees said they could only start rebuilding capacity once a higher goal was announced, so they can plan for the future.

“Do we have volunteer teams ready to settle folks in new apartments? The answer is yes. Do we have liaisons in schools and in police departments and in churches? Absolutely,” said Chris Kelley, who spoke on behalf of Refugee Services of Texas. “We are more than ready, willing and able to settle refugees.”

Organizations like Kelley’s are relatively fortunate. Nearly 100 U.S.-based resettlement agencies closed under the Trump administration, according to State Department numbers.

It’s partly because resettlement agencies are directly funded by public grants and depend on government referrals, since the system is set up to be a partnership between public and private entities.

“We're all sort of stuck,” Kristyn Peck said. “What's critical to the scaling up is the grant that we would receive to allow us to do the scaling up. We can't do one without the other.”

In the meantime, the administration is working to accelerate processing with the resources it has, according to a State spokesperson: they are testing the use of video conferencing for interviews, for example, and working on more efficient ways to vet refugees.

And they said they’re collaborating with the Department of Homeland Security to gauge how migration toward the U.S.-Mexico border has impacted resources, since the agency that oversees resettlement is also in charge of shelters that currently house more than 22,000 children who arrived at the border unaccompanied.

Still, the United States has a history of handling both the refugee and asylum channels of immigration under much higher admissions goals.

President Jimmy Carter, who signed the Refugee Act of 1980, set the first official ceiling at more than 230,000. Admissions hovered above 115,000 during George H.W. Bush’s presidency. And though the numbers dropped dramatically after the 9/11 attacks, they picked back up to around 70,000 in Obama’s years.

At Refugee Services of Texas, Kelley said they settled about 2,300 people in former president Obama’s final year, under a cap of 85,000. While President Trump was in office, that annual number dropped to less than half.

In 2020, for example, they welcomed 818 refugees, 90% of the refugees settled in the entire state of Texas all year.

The State Department has also been preparing for a higher admissions ceiling, a spokesperson said.

“That build back is happening,” they said. “The United States is committed to upholding its long tradition as a leader in refugee resettlement that provides a beacon of hope for persecuted people around the world.”

For now, resettlement agencies are preparing for this year’s higher cap — and everything that comes with it. Peck said they’ve hired more people in anticipation. Kelley explained how they’ve collected donations in storage and have volunteers signed on to help with resettlement when it picks back up.

“I wouldn't say we have excess capacity, but we certainly have enough capacity to manage 62,500," he said.