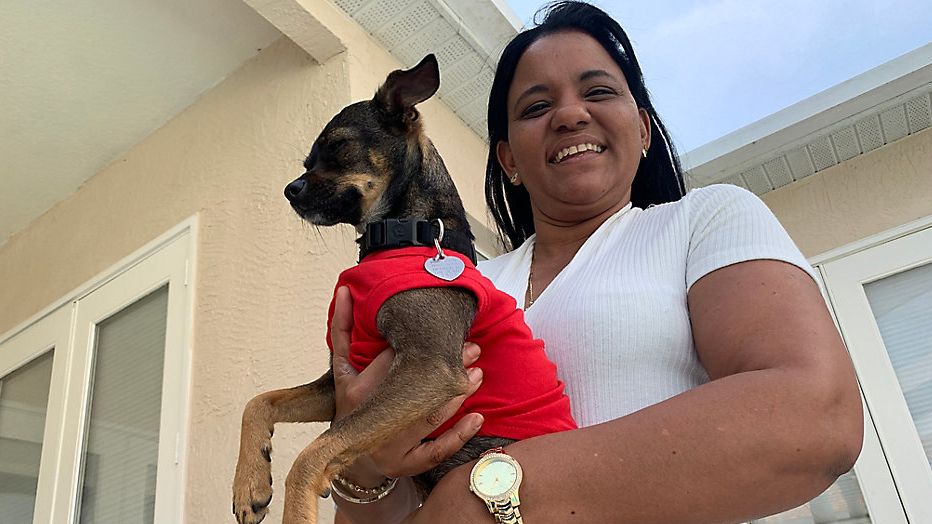 The reunion between Papi and his owner Yohama happened at the Tampa International airport Wednesday, two months after she fled the communist country of Cuba. (Fadia Patterson/Spectrum Bay News 9)

Dog reunited in Tampa with owner who fled Cuba

TAMPA, Fla. —  A family seeking asylum from Cuba in Tampa has reunited with a loved one — a chihuahua named "Papi."

The dog was sent to a shelter when the family was taken into custody at the Calexico, California border.

The reunion between Papi and his owner Yohama happened at the Tampa International airport Wednesday, two months after she fled the communist country of Cuba.

Yohama, who only speaks Spanish, said she felt overjoyed.

"I feel very grateful to have Papi with me now!," Yohama said.

Two shelters in California cared for the Chihuahua up until that point.

A family seeking asylum from #Cuba in Tampa has reunited with 1 of their loved ones. They reached the Calexico border & while in custody separated from their pet named ‘Papi’. They searched for 2 mos. before tracking him at a CA. shelter who flew ‘Papi’ to FL. for a reunion. @BN9 pic.twitter.com/5Dz1c1JwXJ

After Papi's limit of 30 days were up at the first shelter — he would've went up for adoption had the Rancho Coastal Humane Society not stepped in to help.

"We knew about the story, we knew the mom had come from Cuba, to Mexico, came into the United States legally talking to the border of patrol," said Public Relations Director John Van Zante.

Van Zante says his California shelter held on to Papi for another 25 days before finally locationg Yohama - 2600 miles away in Tampa.

"We showed her the picture on the website and she said 'That's my dog," he added.

The California shelter paid all the expenses to fly a volunteer and Papi to Tampa.

With only a two-hour window before the next flight back to California -- the volunteer handed Papi back to Yohama who feared a reunion may never happen.

"I'm very happy and grateful for the association that helped get Papi over," she said. "I didn't know if I was going to be able to see him again."

This is the first time Rancho Coastal Humane Society found themselves planning a cross country trip to reunite a pet and owner.

It's something they say they are proud to be a part of as Yohama and her family seek asylum and adjust to a new life in America.