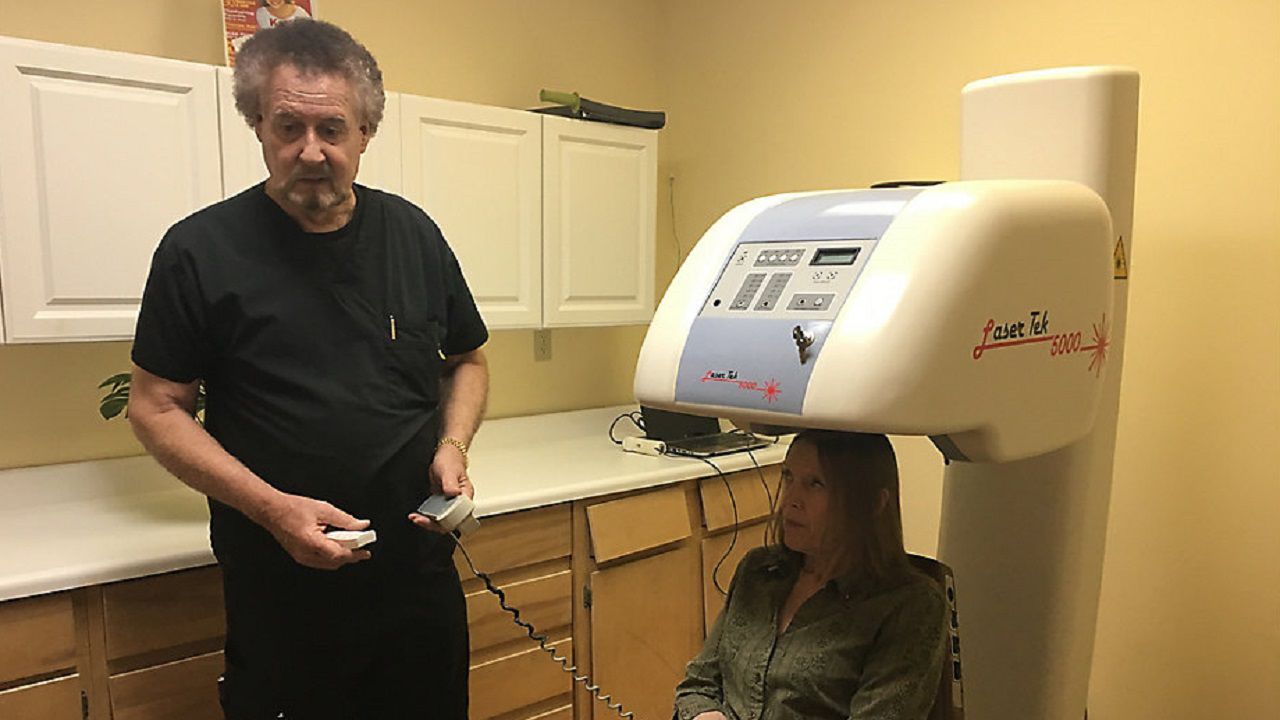 Stress or the virus? Questions remain about root cause of post-COVID hair loss

CLEARWATER, Fla. — Hair loss is among a long list of symptoms COVID-19 survivors report experiencing post-infection, but the exact cause of that is unclear.

"We're kind of like, 'Where's this coming from?'" said John Satino, clinic director of Laser Hair & Scalp Clinics, of multiple patients experiencing what he described as "tremendous" hair loss.

"It can be handfuls that come out or it can be just general hair loss," he said.

Satino said the clinic was conducting a study when they made the COVID connection. While interviewing potential participants, many reported either having tested positive for COVID or being exposed.

Patient Marcia Marks said when she first started noticing hair loss, she thought it was stress-related.

"COVID just really - the fear factor, you know? It was just the isolation, the fear, and just not knowing everything. It must have just caused a real spike in cortisol. Stress causes a lot of problems long term," Marks said.

"She was kind of thinking it was more of a psychological problem or something, but it actually, following it back, we found that she was probably exposed to COVID, and her hair loss was fairly significant," said Satino.

According to Satino, the clinic has seen about 40 patients ranging in age from their late thirties to early seventies who either had or suspect they may have had COVID and later experienced hair loss. He said a microscopic examination of the hair found they were experiencing telogen effluvium, which is stress-related hair loss. He also noted low-grade inflammation was found at the root of the hair.

A study from Indiana University School of Medicine and Survivor Corps surveyed 5,875 people who tested positive for COVID-19 about lasting symptoms and health impacts. According to the pre-print, which has yet to be peer reviewed, a little more than 33% reported hair loss among their symptoms. Researchers found this usually began around 55 days after their initial infection date. A letter published in the Journal of the American Academy of Dermatology by doctors with Coney Island Medical Center and Metropolitan Medical Center, both in New York City, says they saw a more than 400% increase in telogen effluvium in July and August. It notes the centers are safety net hospitals that serve "racially diverse neighborhoods that experienced some of the highest death rates in NYC." The letter, published in December, states it's unclear if stress is the cause of the hair loss or if it's a direct impact of the virus itself. Doctors write that hair loss is one of the most common symptoms reported post-COVID, so it's possible underlying inflammation could be a factor for some patients.

At Laser Hair & Scalp Clinics, Satino said a combination of a CBD derivative and a low-level laser seem to be working in some patients. Marks said she's seeing improvement.

"He put it under the microscope the last time and showed that there is hair coming in. And the month before that, he counted how many hairs were in this exact spot, and it went from eight or nine to, like, 20," Marks said. "I am not a spring chicken, so it is going to take a while for the hair to come back, but I'm very hopeful and positive and very happy that I'm doing this."

Satino said it's too early to say if possible COVID-related hair loss could be temporary or ongoing.