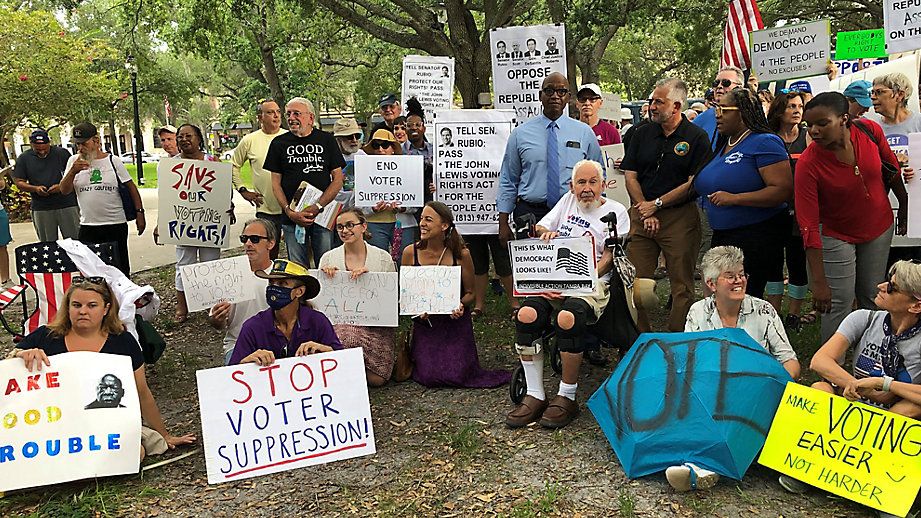 The St. Pete rally was one of many across the country held in recent weeks to push for federal voting legislation. (Mitch Perry/Spectrum Bay News 9)

A group of elected Pinellas County Democratic officials rallied on Saturday in St. Petersburg’s Williams Park for federal lawmakers to pass election reform legislation that they say would improve access to the ballot box.


“The system worked,” said former Pinellas County Commissioner and now St. Petersburg mayoral candidate Ken Welch about Florida’s election in 2020.  “We saw the Legislature in Florida and across the nation try to change voting access and make it harder to vote. Not because there was fraud. Not because there was anything wrong with the way that the vote occurred, but they didn’t like the outcome, and they decided they were going to overrule what the people said. “

“I can’t even give an old lady in line a bottle of water who wants to vote,” she said. “I can’t give a pack of crackers to somebody who wants to simply drive through and drop their ballot off. On top of all that, I can’t even pick up ballots from the nursing home and the ALF (assisted living facility) to take and drop off in a box.”

The event featured the crowd of around 100 people shouting into the telephone of organizer Michael Fox, who had dialed into the voicemail box of Florida U.S. Senator Marco Rubio, calling on him to support the For the People Act.

Rubio’s not going to be doing that, however.

“Democrats want unaccountable bureaucrats in Washington to run our elections in Florida,” Rubio said in a statement last month after Senate Republicans were able to vote against starting debate on the bill. “Not only is that unconstitutional, it is reckless. Florida election laws strike a fair balance between accessibility and security, and further involvement from Washington will weaken our elections and make things worse for Florida voters.”

Rick Scott, Florida’s other U.S. Senator, calls the For the People Act “ridiculous,” and is especially discontent with the provision that would establish a public financing system for those running for congress.

“This is the most radical piece of voting legislation that this nation has ever seen,” Scott said on the Senate floor last month, adding that it was also a “political power grab by Washington Democrats.”

The other election bill that Democrats are pushing for is the John Lewis Voting Rights Advancement Act, which would restore a provision of the 1965 Voting Rights Act that the U.S. Supreme Court struck down in 2013. That provision required certain jurisdictions with a history of racial discrimination in voting to receive approval, known as preclearance, from the federal government before making changes to their voting rules. There were five Florida counties previously covered by the law, including Hillsborough County.

Tampa Democratic U.S. Rep. Kathy Castor told Spectrum Bay News 9 in May that she felt it was crucial to pass this bill, named after the late Georgia civil rights icon who died last summer at 80. “That really is the most important piece to make sure that unnecessary discriminatory barriers are not erected,” she said.

Democrats may not be able to pass either bill, however. Under the Senate filibuster rules, they would need to get 60 votes in the Senate, which is currently divided literally 50-50 between Democratic and Republican members.

“The filibuster has to go down at least for this. I think without question,” said St. Petersburg- based Democrat Tom Kimler, who attended the rally. “If we maintain the filibuster, then nothing gets done.”

It’s not even certain that the Senate Democrats have all 50 of their members in support of breaking the legislative filibuster, however. West Virginia’s Joe Manchin and Arizona’s Kyrsten Sinema have both said that they are not willing to go that far.

“It has to be done by Sinema and Manchin doing what’s right,” insists Kimler.

Over the weekend, South Carolina Democratic Rep. James Clyburn supported the idea of getting rid of the filibuster for these election bills, telling POLITICO that if the two voting rights bills before Congress don’t get passed soon, “Democrats can kiss the majority goodbye.”

President Biden is expected to give a major speech about voting rights on Tuesday in Philadelphia.