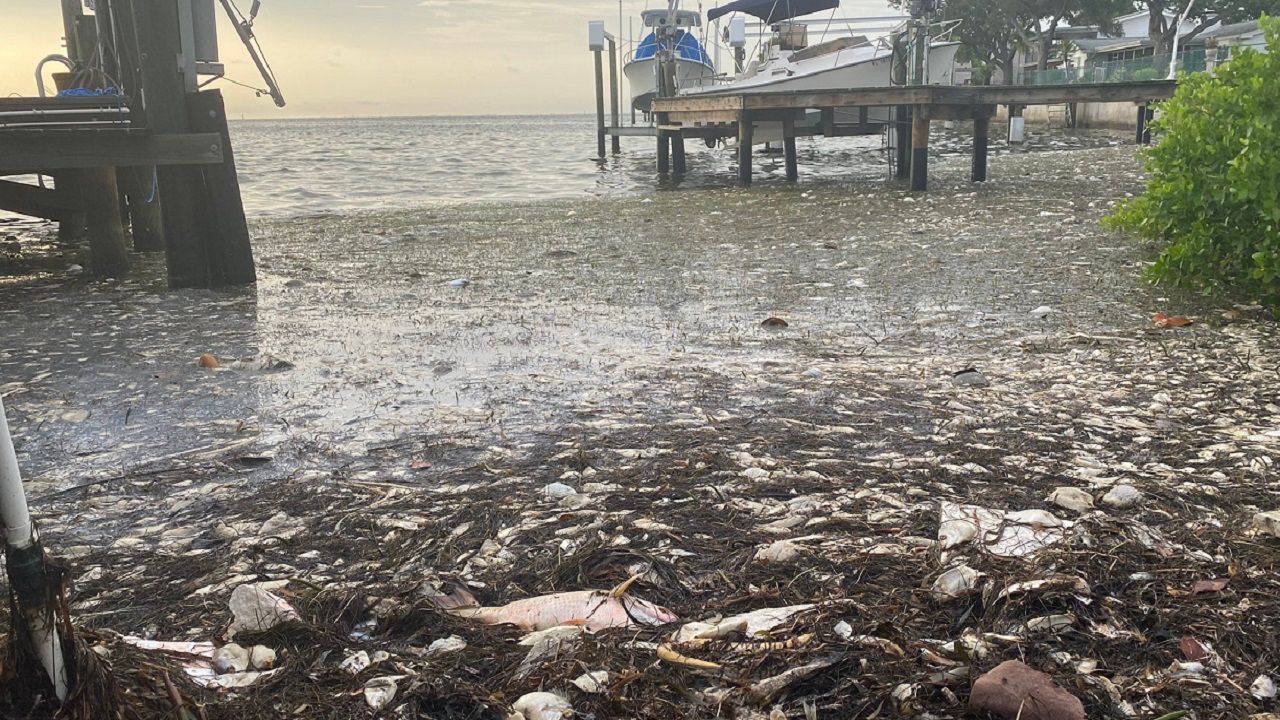 Hundreds of dead fish wash up along a St. Pete homeowner's sea wall Thursday. Despite the city pulling its workforce from parks and rec and sanitation to clean up the massive fishkill, the city is still looking for more help. (Melissa Eichman, Spectrum News staff)

Dead fish continue to wash up along waterways in Pinellas, but also in Pasco, Hillsborough and Manatee counties.

On Thursday, the city council unanimously approved two resolutions: one asking Pinellas County to extend its annual ban on the sale and use of fertilizer past the normal September 30 end date, and the other is a request that Gov. Ron DeSantis declare a state of emergency.

“We know that blooms do typically initiate in August, September, October,” said Florida Fish and Wildlife Commission research scientist Dr. Kate Hubbard. “It's very unusual to see the bloom in Tampa Bay this time of year.”

But, while unusual, the bloom can’t be blamed on just one thing.

“There isn't just one singular smoking gun,” said J.P. Brooker, Director of Conservation at Ocean Conservancy. “It's a combination of naturally consistent factors. It's a combination of human driven impacts, and all of these things need to be addressed in order to solve the problem."

Despite the city pulling its workforce from parks and rec and sanitation to clean up the massive fishkill, the city is still looking for more help.

The governor’s office just responded to a similar request from Mayor Rick Kriseman.

In a statement from the governor’s communications team, they said a state of emergency isn’t necessary yet the way it was necessary in 2018.

Plus they said, any funding St. Pete is looking for is already available through grants from the Department of Environmental Protection.

In the end, council chair Ed Montanari said he’s confident the city will get the help he needs.

“The resources that the city is putting forward is massive,” Montanari said, “The county is engaged also and so is the state. So all levels of government local, county and state are all engaged and working on the problem.”