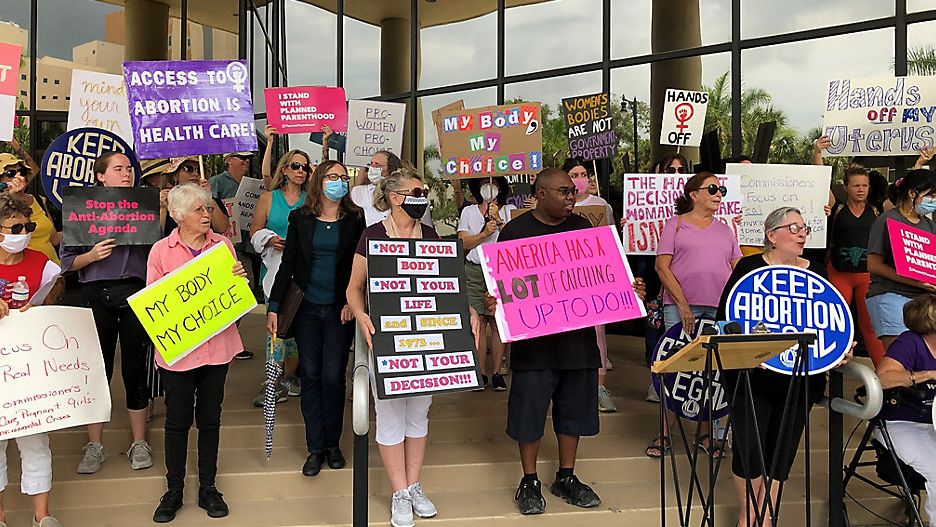 More than three dozen abortion rights advocates protested in front of the Manatee County Administration Building on Tuesday morning, blasting a proposal by a county commissioner that would severely limit if not outright ban medical abortions in Manatee County.

Currently, there are no abortion facilities in the county.


But at a meeting last month, County Commissioner James Satcher called on the board’s attorney to look into laws that have passed in more than two dozen cities in Texas that have enacted local abortion regulations.

In response, pro-choice advocates announced weeks ago that they would hold a rally outside of today’s meeting. Protesters began demonstrating outside the government building at 10 a.m., and followed up with a press conference, where they trashed the proposal as being unconstitutional and a radical proposal for a local government body to contemplate.

“The fact is unintended pregnancies will occur,” Bradenton resident Carolina Zamora told the board during a half-hour of public comment earlier in the day. “And abortions will take place. But instead, they will happen behind closed doors and in unsafe conditions.”

Satcher has said that he has been discussing the proposal with state lawmakers that would allow for local governments to enact their own abortion regulations.

The movement to get local governments to pass abortion bans isn’t limited to Texas; two cities in Nebraska and Lebanon,Ohio have also done so. The leader of this movement is Mark Lee Dickson, the director of Right to Life of East Texas and the founder of the “Sanctuary Cities for the Unborn Initiative.”

“For so long this has been pushed through the state legislature and the national legislature, and we’ve neglected the local,” he said while observing the protest from a distance.  “If an abortion facility moves into our community, it’s not our state’s problem. It’s not our nation’s problem. It’s our problem.”

Dickson said he had been in Naples before deciding to drive up the coast to observe the meeting (Naples has also been considering a similar proposal, but Dickson said that the effort needs one more member of the city council to support it).

Among those leading the protest was Amy Weintraub, the reproductive rights program director with Progress Florida. She says women in Manatee County already have a problem because they lack access to “a spectrum of reproductive health care.”

Outside the Manatee County govt building is @MarkLeeDickson , who has led the effort in Texas to have cities outlaw abortion services, now bringing his movement to Florida pic.twitter.com/R2fuDzlIdM

“The fact that there’s not a stand-alone abortion provider means that Manatee people who need abortions must go elsewhere,” she said. “That’s an issue that the county commission might be addressing.”

“I don’t even know if they were to vote and pass this ban if it would cut legal muster, because I don’t know if that’s something that could actually happen on a county level,” she said, adding that she felt that this was “really red meat for a lot of these folks because reelection is coming (in 2022).”

The largest city in Texas that has passed an abortion ban is Lubbock, Texas. A lawsuit filed by Planned Parenthood to block the ban from going into effect was dismissed last month by a federal judge.

“Every lawsuit that’s been brought against a sanctuary city for the unborn we’ve succeeded at,” says Dickson. “Abortion remains banned in those (Texas) cities and it hasn’t cost their citizens or taxpayers anything.”

One of the only major abortion-related bills in the Florida Legislature during the 2021 session - a bill that would ban abortions when prenatal tests reveal disabilities - passed in the Florida House but failed to get through the Senate.

The Manatee County Commission did not address the issue during Tuesday’s meeting.