Brandon Call caught the longest python among the novice trappers with a 15 foot-9 inch snake. (FWC)

FLORIDA EVERGLADES — A total of 223 invasive Burmese pythons were removed from the Everglades ecosystem during the 2021 Florida Python Challenge.

The competition was hosted by Gov. Ron DeSantis and the Florida Fish and Wildlife Conservation Commission in partnership with multiple local businesses. 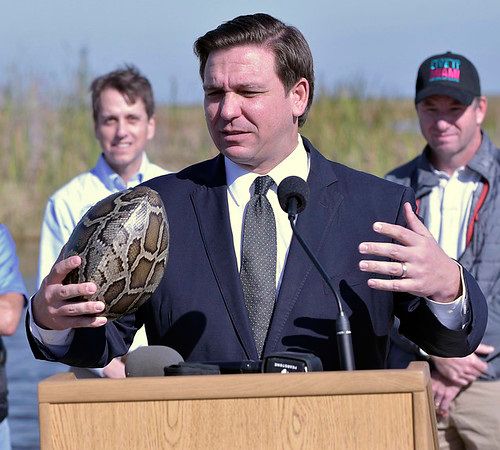 More than 600 people registered for the 10-day competition, removing invasive non-native snakes while raising awareness about invasive species. $10,000 was given out as the Overall Ultimate Grand Prize for most pythons removed, as well as recognition for longest snakes caught.

During the competition multiple python nests were removed preventing these pythons from dispersing, breeding and preying on native wildlife.

In first place in the “Professional” category for the longest #python captured, the winner is Dusty Crum! The length of the python captured to win this award was 15 ft. 5 inches. #FWC2021 pic.twitter.com/BTCNn85hu0

Both professionals and novice python hunters were able to register and participate in this annual event.

Burmese pythons are non-native snakes that pose a threat to wildlife in the Florida Everglades. They can grow to be 26 feet long and over 200 pounds when fully grown.

For more information about the Florida Python Challenge and conservation efforts in the Everglades, click here.