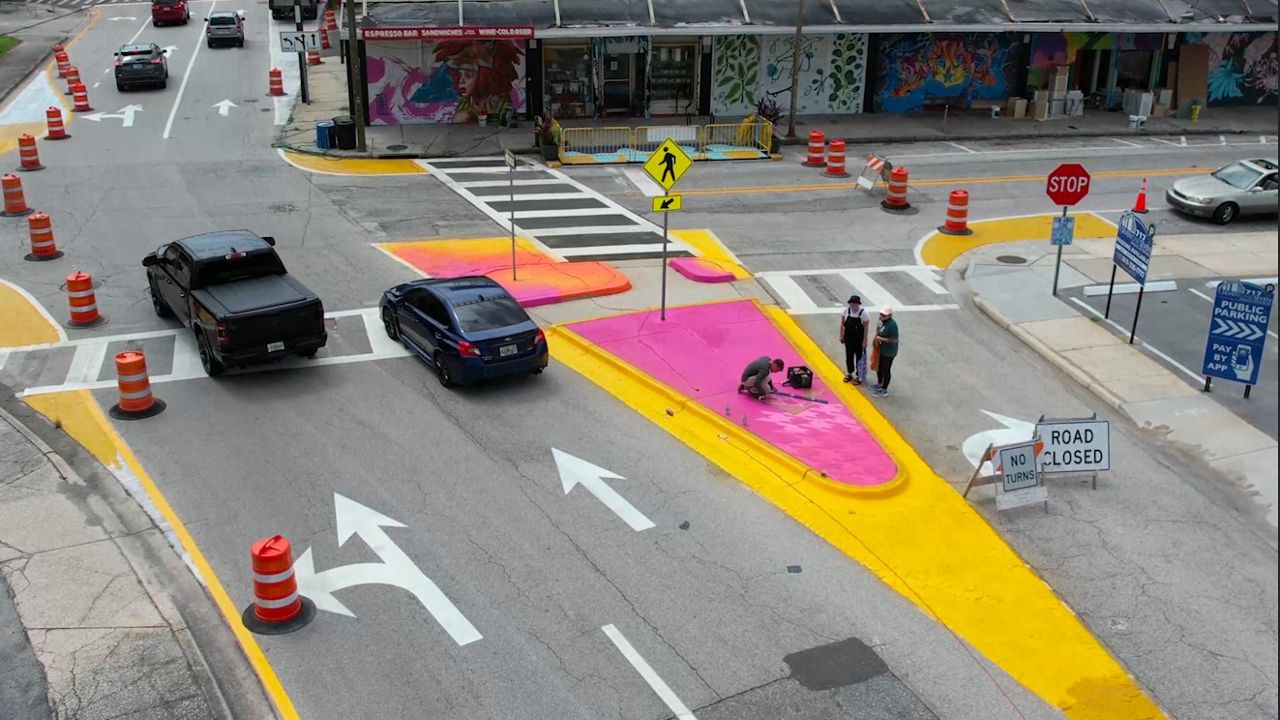 New ground mural in Tampa is designed to improve safety

TAMPA, Fla. — The city of Tampa has gone the extra mile with an innovative way to encourage driveres to slow down at several intersections — ground murals.

Some colorful examples include the Pride mural, paintings on Franklin and Twiggs Streets, the Black Lives Matter mural and decorated curb extensions on Ashley Drive.

Husband and wife Tampa artists from Illsol created the latest one off of Kay Street and says these murals are more than just paint on asphalt and concrete.

Tony Krol is one half of the duo who battled rain, the blazing heat and speeding motorists to get the job done.

"I actually have to put out cones and stuff," he said — a daily reminder of how his colorful creation could improve safety at the intersection. "It's interesting to me that a lot of people rush to get to a red light or honk at people if they have a little bit of a delay."

“It’s good to slow down and take in your surroundings every now and again,” said Tony Krol of @illsol . He is one of the muralists who partnered with @Tampasdowntown for #PaintSavesLives . The ground mural on Kay St. is latest effort to slow #traffic. @BN9 pic.twitter.com/HXIj2WQA7Q

The project is part of a worldwide movement called Vision Zero.

"[Kay Street] ends up being almost like a speedway to get on I-275," said Tampa Downtown Partnership Director of Tansportation Karen Cress. "The goal of that is to have zero fatalities and extreme injury on our roadway network."

The mural is the latest effort to beautify corridors while making them safer for drivers, pedestrians and cyclists

"When drivers make that turn, all of a sudden they're being hit with all of this color and thinking 'Whats this? Maybe I need to slow down a little bit.'"

Cress says after losing revenue from the All for Transportation tax, painting is much more affordable when it comes to updating safety measures along these streets. She says the mural on Fletcher Avenue near the University of South Florida is an example of the initiative's success.

"There's been something like a 60% reduction in fatalities," Cress said.

Krol says he's glad his art can be used to serve a greater purpose.

"It's good to slow down and take in your surroundings every now and again," he said.