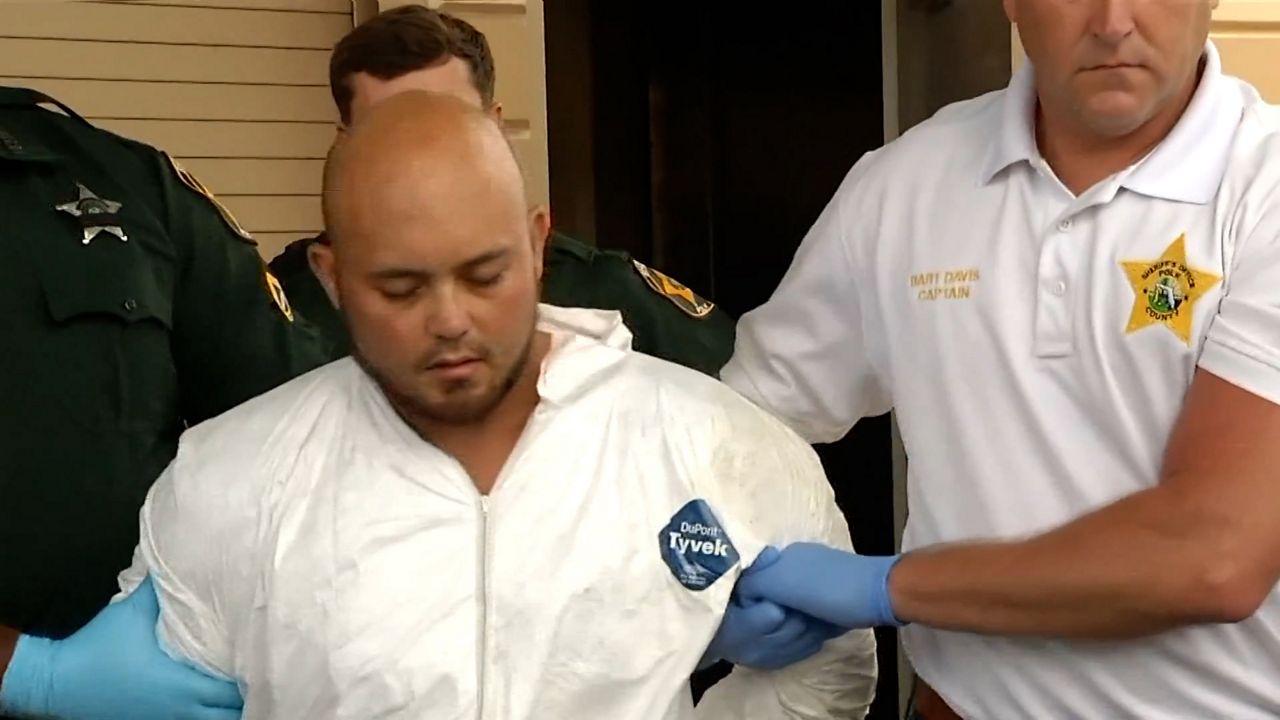 POLK COUNTY, Fla. — In a "bizarre occurrence," four people were killed, including a baby, during a "shooting rampage" in Lakeland early Sunday morning.

Polk County Sheriff Grady Judd said the suspect shot at two different homes along North Socrum Loop Road, killing four and injuring an 11-year-old girl. The girl, who was shot multiple times, is being treated at Tampa General, according to authorities. She's expected to survive.

Sheriff says it’s a rare occurrence: "this is God's country. Our crime rate in this county is at a 49 year low. you've never been as safe as you are right now, but when you get a nut job like this statistical data makes no difference. This guy was wired up on dope and meth.” @BN9

Judd says the crime scene and investigation is just beginning and will take days. He identified the suspect as Bryan Riley, 33, of Brandon.

The sheriff's office says Riley claimed he was on meth and that he was a survivalist when he was taken into custody. Judd says Riley's girlfriend and family also say he was an honorably-discharged Marine who suffered from PTSD and in the last week or so believed he could talk to God.

However, Grady said Riley was very in tune with his statements and admission, "playing word games," and at one point told deputies the victims begged for their lives and he killed them anyway.

Judd said the man was "a rabid animal", and the crime scene was easily one of the worst he had ever seen.

"This man is evil in the flesh," Judd said.

The sheriff's office received multiple 911 calls about an active shooter around 4:30 a.m.

Sheriff deputies, Lakeland Police, SWAT, and other agencies responded to the area near Fulton Greed Road in unincorporated Polk County.

According to the report, "deputies came under attack when they arrived near a residence." They also heard a woman screaming.

Sheriff Judd said 100 rounds were fired between Riley and deputies, who they said was in camp and a bulletproof vest. The suspect was shot once, but no law enforcement officers were injured.

Eventually deputies were able to get into the house, and that's where they found the injured 11-year-old girl, who told deputies there were three others in the house.

#NEW @PolkCoSheriff released these photos after an early morning shooting left 4 including a baby dead in Lakeland. Sheriff Grady Judd says the suspect who is in custody called himself a ‘survivalist’ and was dressed in camo and a bullet-proof vest. @BN9 pic.twitter.com/9DsyEYS1Ft

Deputies and Lakeland Police, who assisted in the case, found three victims in the home:

Judd said the deputies found a 64-year-old woman, believed to be the younger female's mother and the baby's grandmother, in a home behind the first house.

Those four did not survive. The unnamed victims are not being identified because family members invoked Marsy's Law.

It's not entirely known what the motive is in the mass shooting. Judd said Riley was not related to any of them.

However, on Saturday evening Riley stopped near the home and spoke to a man on a lawnmower (possibly Gleason), and said God sent him to speak to an "Amber" one of his daughters, because she is going to commit suicide. The man said there was no one named Amber here, but Riley insisted. The man called the sheriff's office, and deputies searched the area for more than 20 minutes but Riley had gone.

The shooter from this morning’s homicide was identified as a marine.

After he surrendered to law enforcement he told officers he had used meth and suffered from PTSD.

Judd said that, according to Riley's girlfriend, Riley had had depressive episodes since returning from his tours overseas, but was never violent.

However, last week Riley came back from a job as a security guard at an Orlando church and told her that he could now talk directly to God.

Over the week he became more erratic, but remained non-violent. For instance, Judd said Riley told his girlfriend that God told him to get relief supplies for Hurricane Ida victims. He also bought a $1,000 in cigars as gifts.

After the suspect came home Saturday evening, the girlfriend allegedly told Riley that God was not talking to him. Riley told her there was no room for doubters in his life, and he went into his mancave.

When she woke up early Sunday morning, Riley was gone.

Riley was taken to Lakeland Regional and was treated before being released and booked into jail.

As a Marine and in the reserves, Riley served in Afghanistan and Iraq, and he was designated as a sharpshooter.

He did have a concealed carry permit and no criminal history.

Judd said that just because someone has a mental health issue, it doesn't mean they're going to become a mass shooter.

"The reality is this nation doesn’t do enough to help the mentally ill," Judd said.

However, it was clear the crime scene rattled Judd through the news conference, as the normally fearlessly blunt sheriff at one point said he probably shouldn't say much more about his thoughts on the suspect.

#New A total of 4 people were shot at two separate homes. Sheriff says they are not certain of what the connection is just yet. @BN9 pic.twitter.com/YZPU5zTxlI