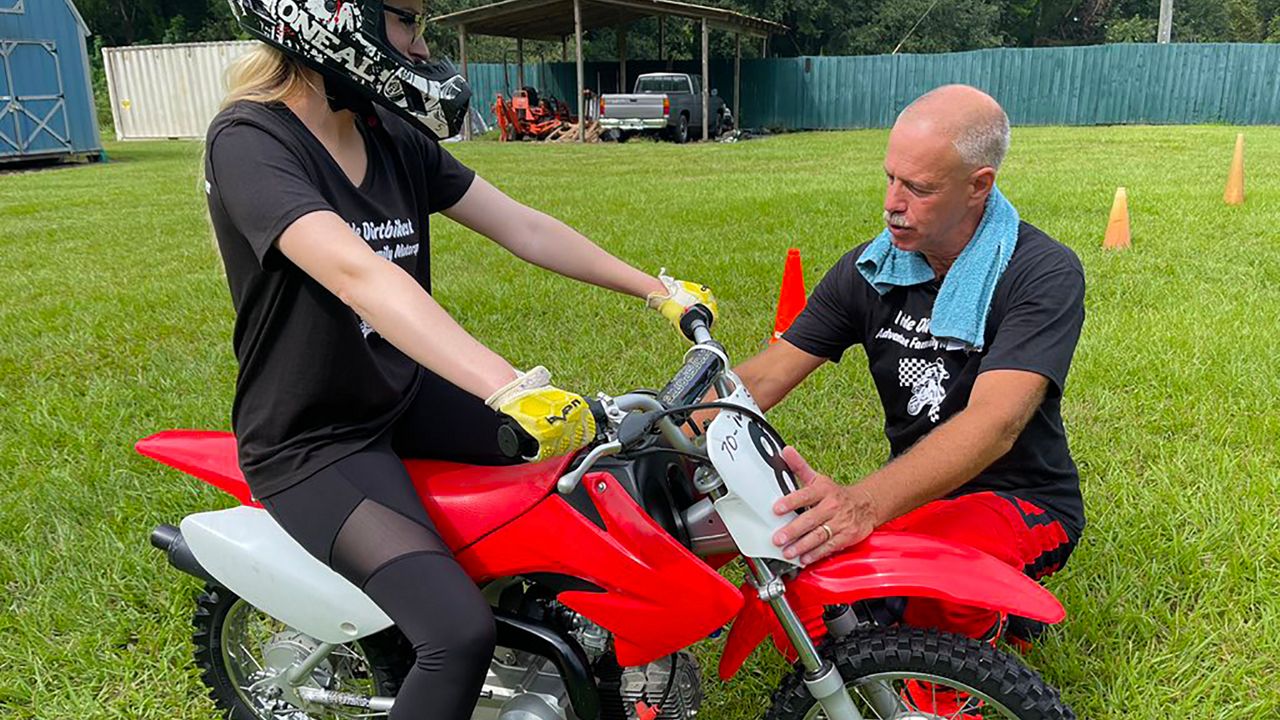 Florida on a Tankful: Learn to ride dirt bikes in Bushnell

BUSHNELL, Fla. — Off the beaten paths and away from the hustle and bustle of city life, you'll find the quiet town of Bushnell. A charming community with a local staple, a man who is taking his lifelong passion and sharing it not only with his tight-knit neighborhood but anyone who will make the journey to his 20 plus acre plot of land.

“Okay, Keller, you're going to slowly turn on the throttle," "Dirt Bike Doug" Tilghman shouted over the megaphone to his latest pupil." Don't forget about the 4 seconds, lean, lean!"

With megaphone in hand, he's coaching his newest arrival introducing her to the world of dirt bikes.

“Downshifting is like this with your foot on the top," he explained, it's all part of the three-hour course that gets you riding dirt bikes.

It is a passion for riding since he was 7 and he is now gone on to master this wild sport becoming known by his neighbors and friends as dirt bike Tilghman.

“Once we get it out there that dirt bike is going to pur," Tilghman said.

Tilghman went from simply teaching his wife and children to now owning 20 plus acres, a fleet of dirt bikes, and teaching classes multiple times a week to anyone willing to learn.

“Helmet hair is a badge of honor here on the dirt bike ranch," Tilghman said.

During his three-hour course, you'll have the whole ranch to yourself. Tilghman only schedules one family per visit. An aspect he prides himself on, giving complete attention to his riders and almost always guaranteeing he'll have you riding like a pro at the end of your session.

Your end result will hopefully see you and Doug doing donuts through his forest trails and kicking up some serious mud.

Adventure Family Motorsports is open by appointment and reservation. Tilghman says texting to set up appointments is the best way.

Meet Doug.. or as his students know him, Dirt Bike Doug. He’s been riding since he was 7 and now he owns and operates a school in Bushnell where he dedicates his time to teaching YOU how to handle these off road bikes. It’s an upcoming Tankful @MyNews13 @BN9 pic.twitter.com/2lhyZ0BkPQ