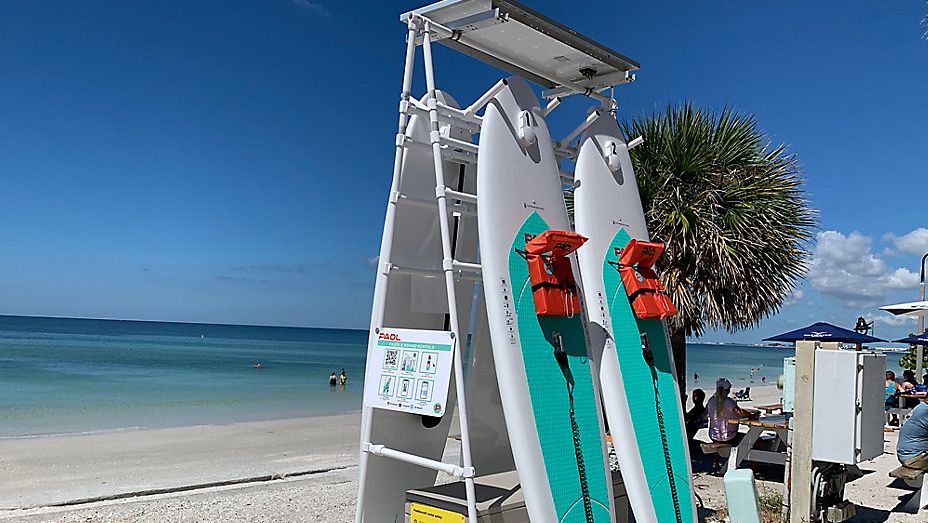 "We're just trying to hit some of the goals we set with our strategic plan," said St. Pete Beach COO Jennifer McMahon. "This was one of them."

Two of the rental stations are located near the snack shacks on Pass-A-Grille Beach and Upham Beach. The other two stations are at Egan Park and McKenney Park.

"We're adding docks, new ones, here at Egan, at McKenney, so people can access water," she said.

The city partnered with a company called PADL to install the self-service paddle boards. Each station has four paddle boards that can be rented for $19 per hour through the PADL app.

"I think it's super cool — this is a real neat, modern, way for people to be able to get out on the water and recreate in St. Pete Beach," said resident Karen Marriott. "You don't have to tie it to the roof of your car. You don't have to have a place to store it in your garage."

Marriott's also the owner of North Beach Windsurfing in St. Pete Beach. Even though Marriott sells paddle boards from her business, she's not threatened by the rental stations. In fact, she was one of the residents asking for it.

"I think it can only be helpful," she said. "Once people get out on the water and find out how great it is ... maybe they become avid paddle boarders and they want to come buy one from us.

"Our main business is windsurfing and we call paddle boarding the gateway drug to windsurfing."

"It's a quality of life thing for us," he said. "We don't own a lot of the beach, so we're trying to get the pieces we own and try to make it more friendly for people to come visit, and for the residents."

Marriott said she's grateful that city leaders are receptive to ideas from residents.

"As a resident, going to meetings and asking for things like, 'Gosh, is there anyway we can get water access?' You really expect that no-one will ever do anything," she said. "The mayor and the city manager have all been so accepting of ideas. So, that's really fantastic. It's part of what makes St. Pete Beach great."​

The city is the first Pinellas County beach town to get paddle board rental stations. The only other station in the county is located at Philippe Park in Safety Harbor.