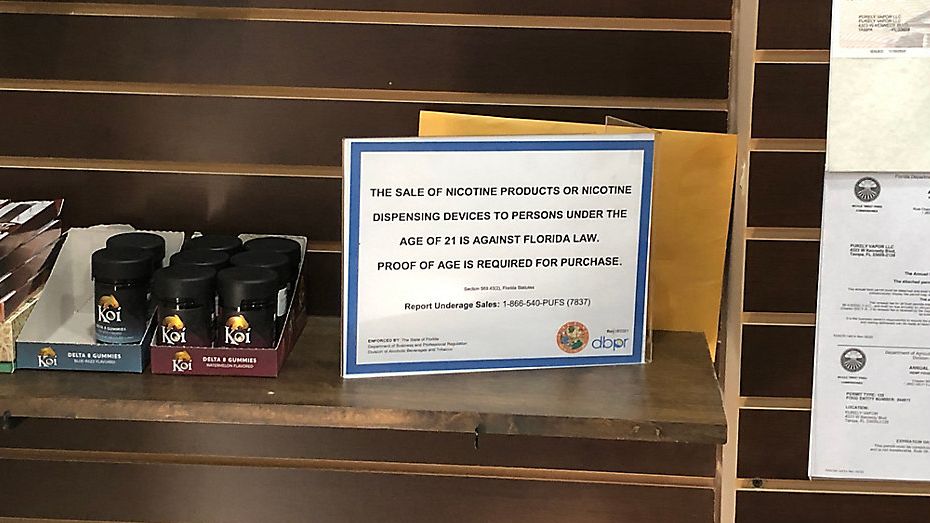 These signs are required to be placed at the checkout counter of shops selling nicotine in Florida. (Mitch Perry/Spectrum Bay News 9)

Tampa-based GOP House Rep. Jackie Toledo says that she was "shocked" recently after she went into a retail store in Tampa that sells e-cigarettes and didn't see any signs informing the public that it’s now illegal for anyone 21 and under to purchase vaping products in the Sunshine State.


“I know that they were selling to minors because someone had told me that they had purchased something there and I wanted to make sure that they would comply,” says Toledo, who co-sponsored legislation during the 2021 session that raised the legal age to buy tobacco and nicotine products in Florida from 18 to 21, complying with federal law.

The new law says that retail store owners must obtain a permit from the state to sell nicotine products, and they must also place a sign at their checkout counter that says that nicotine dispensing devises to persons 21 years of age is unlawful.

Toledo says her intent on filing the legislation was reading and hearing about personal stories about teenagers using e-cigarettes. The Centers for Disease Control has reported that most e-cigarettes contain nicotine, “and nicotine exposure during adolescence can harm the developing brain.”

During the House Regulatory Reform Subcommittee meeting last week in Tallahassee, an official with the Florida Dept. of Business and Professional Regulation (DBPR) said that it had only received one application for a permit to sell nicotine products to date, a figure that Toledo says is “disappointing.”

The Tampa Republican says that after visiting the vape store that she believed was selling to minors, she reached out to both the Tampa Police Dept. and the Hillsborough County Sheriff’s office to see if they could do anything about it. She said she was told that regulating vaping shops was not under their jurisdiction, and that she would need to reach out to the DBPR (the Tampa Police Dept. did not immediately respond to our request for comment. A spokesperson for the Hillsborough County Sheriff’s Office told Spectrum Bay News 9 that the incident in question was under the jurisdiction of the TPD, and not their agency).

Officials with the DBPR say that they have sent out an information packet to all local enforcement agencies about the new law and what sorts of fines are associated with it. But they say it will take time for retailers to come into compliance.

“The interesting thing about the new permit is these locations - if you’re thinking of vape shops - were not ever regulated by the department before, so there’s going to have to be a period of education where we go out and visit them,” said Daniel McGinn, assistant director of DBPR’s Alcoholic Beverages and Tobacco Division, in speaking at the House Regulatory Reform Subcommittee meeting last week.

The fact that the legislation gives the power to regulate vape shops to the state and away from local governments was criticized by several public health organizations earlier this year.

For Toledo, the issue hits close to home. Shortly after she had already filed a similar bill for the 2020 session (which was passed by the Legislature but ultimately vetoed by Gov. DeSantis), her then 15-year-old daughter became extremely sick after using a vaping product and had to be rushed to the hospital.

“The vape that she tried was laced with something else and she had an overdose of nicotine and THC, and that’s what I’ve been telling them – you don’t know what’s in these products,” Toledo says about her concerns about vaping."Some may be safe...but some could be laced with anything. We just don't know."

And Toledo says she is considering reaching out to the Hillsborough County government to see if they could select a specific officer to ensure that vape shops in the county are in compliance with the new law. "I believe that every county has this issue," she says. "It's not just Hillsborough County. But I live here. I know that on Kennedy Blvd. (in Tampa) there are probably 15 vape shops and now I know none of them have applied for a permit. They're not acting under the law."

Teenagers are definitely continuing to vape, despite laws like Florida’s. A new national survey released last month showed that more than two million said that they use e-cigarettes, with a quarter of them saying they vape daily.

Toledo says she'll be monitoring the progress of how many vape stores come into compliance with the new law.