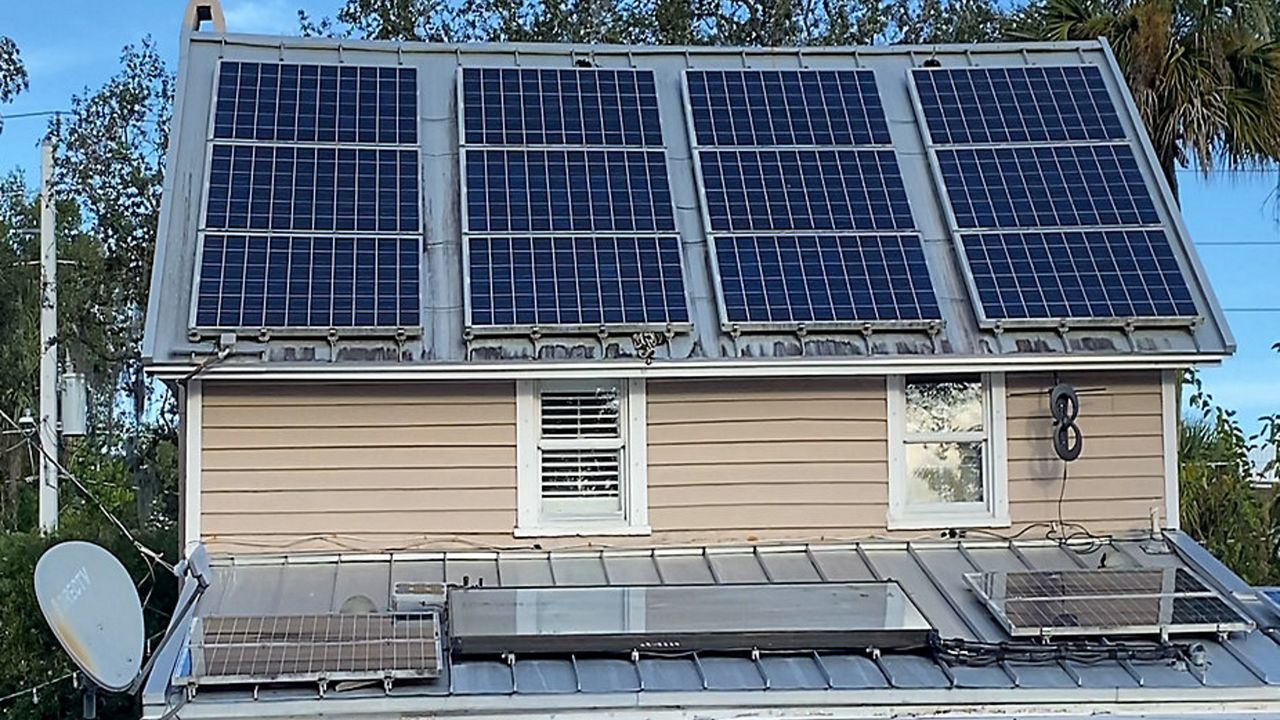 The solar array set up on the roof of Bill Young, a Titusville resident and solar advocate. (Spectrum News/Will Robinson-Smith)

ORANGE COUNTY, Fla.  — On a hot, bright day in Florida you can’t help but feel the power of the sun, whether it’s while getting a tan at the beach or cranking up the air conditioning to escape the heat.

​But is the state taking full advantage of the potential to capitalize on the amount of sunshine seen in the Sunshine State? For one professor at the University of Central Florida, the answer is "no.”

Last year she, along with researchers at Ohio University, authored a report that argued for relaxing state regulations regarding what are known as power purchase agreements. They worked with Solar United Neighbors, a nonprofit that promotes solar energy production, along with RISES on the study.

It concluded that by paving the way for more solar energy production could result in a $3 billion boost to the State of Florida along with supporting 18,000 jobs.

“The standards have improved, the technology has improved, but the rules haven't changed,” Stevens said. “And so, there's still these added requirements and insurance liability requirements that really add to the cost that make it more cost prohibitive for customers who would like to add solar to their property.”

Right now, Florida has regulations that make it so anyone who wants to sell power back to the grid, like from a residential or business-based solar array, would have to follow the same rules as a large utility. Those stipulations “include building codes, permitting, reliability reporting, electric-rate scheduling and tariff regulations under the Florida Public Service Commission.”

Florida is one of only seven states with legal roadblocks that make creating PPAs much harder.

“Without having that power as a consumer to choose your electricity source, you tend to see a lot of influence by utilities on the regulators or on the Public Service Commission,” Stevens said. “And so, you don’t see as many clean energy-forward policies in Florida, I think in large part because of that reason.”

Not only would expending solar in the state bring an economic bonus, but it would also have an environmentally positive offset. The study found that by increasing non-utility solar generation by 42% through PPAs, it would reduce the same amount of greenhouse gas emissions as if you took more than 118,000 gas-powered cars off the road each year.

According to the U.S. Energy Information Administration, “Florida consumes almost eight times as much energy as it produces.” Because of the tourism industry, about two-fifths of the state’s total energy usage came from the transportation sector in 2018.

More than a quarter of the energy usage comes from the residential sector.

The EIA reported that in 2019, renewable energy only made up about 4% of Florida’s net generation, mostly through solar energy and biomass.

More cities are starting to take initiatives to invest in solar energy. On October 19, the City of Orlando and Orlando Utilities Commission rolled out the 2030 Solar Pledge, which asked businesses to pledge to use at least 10% solar energy upon signing the agreement.

It pushes toward the goal of requiring 100% solar energy usage for all business by 2030. OUC has a stated goal of reaching net-zero carbon emissions by 2050.

The PPA study also looked at Orlando, which currently has 19 city facilities that participate in the UCF community solar program. It found if that by installing 18 megawatts of solar energy through a PPA on 14 more city-owned buildings, it would save the city $400,000 annually on electricity costs.

Advocates for solar energy in Central Florida, like Titusville resident Bill Young, point to a few different resources, like DSIRE and the Florida PACE Funding Agency as good places to start for those interested in adding solar capacities to their home or business.