Central Florida ranchers say that even though the price of beef is going up, the amount of profit they make selling their cattle is actually going down. (File Photo)

Florida rancher says beef prices may be up, but cattle profits are down

ST. CLOUD, Fla. — While prices for just about everything continue to rise like gas, groceries, and homes, not everyone is seeing an increase with their bottom line.

Despite the price increase you may be seeing at the grocery store for your favorite steak or cut of meat, Central Florida cattle ranchers say they aren’t seeing any of those profits.

To better understand this, consumers need to understand that cattle and beef are two separate markets — cattle is what ranchers in Central Florida farm, beef is what consumers purchase.

The Doc Partin Ranch in St. Cloud has been around since the 1950s.

On a clear sky blue day on his ranch, Ricky Booth drives around on a 4-wheeler checking on his cattle. His ranch produces about 800 calves a year, but they will eventually go through a whole system before they are harvested as beef.

“You don’t eat the whole thing, beef is the finished product,” Booth said with a chuckle.

After his calves are sold, they head west to graze and become fat cattle. Then they head to a feed yard, followed by a processing plant, graded by the USDA, before finally being sent to distributors.

“What we have is mature cows that hopefully raise a calf, hopefully every year," Booth said. "We will takes those calves and raise them on our abundance of forage down here in Florida.

Cattle in Central Florida are sold at the end of summer and early fall, but will not become beef for the consumers until spring or summer of next year. During the seven to nine months Booth raises his calves, nearly all his costs along the way have gone up due to the pandemic.

“Fuel and labor costs, and labor shortages," he said.  "Certainly feed costs for our mineral supplementation.” 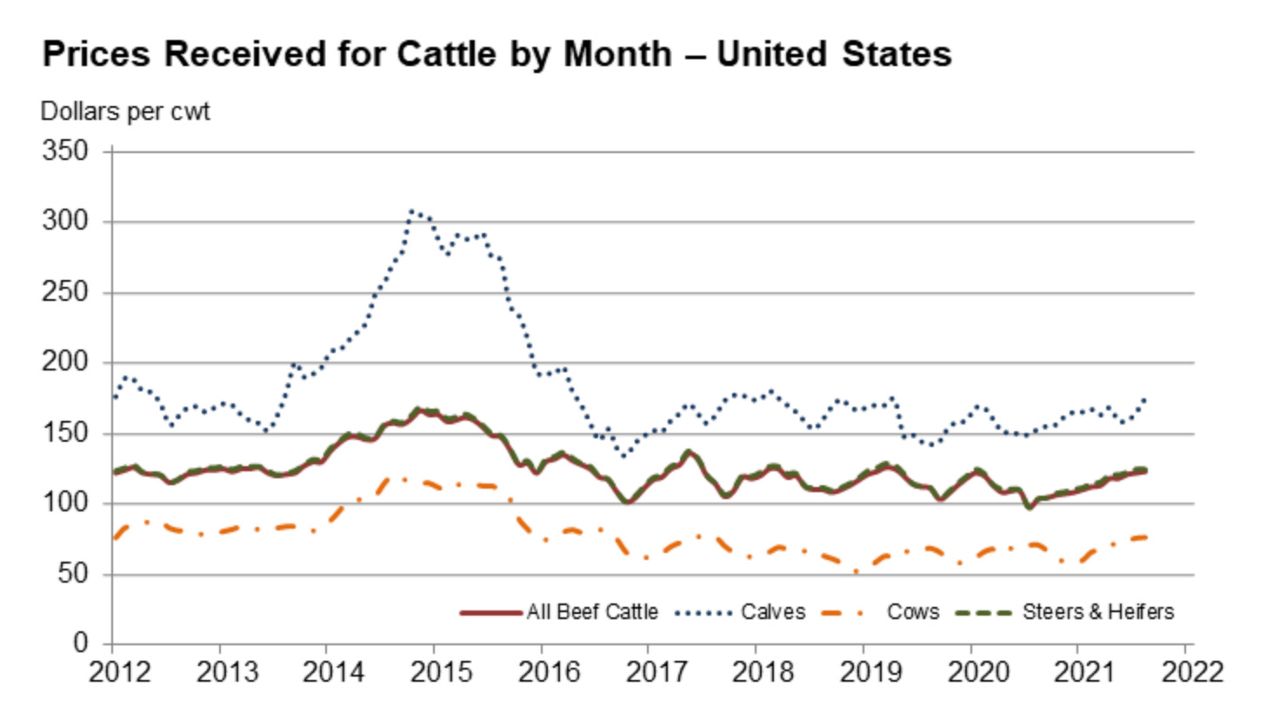 Average cattle prices in the U.S. by year (Source: USDA)

Despite all the items Booth needs to buy, the cost of his cattle for nearly five years has been pretty stagnant no matter how much his cattle weigh.”

“We are price takers not price makers," he said. "So when we are raising an agricultural product you are a price taker at the bottom, so we are at the whims of the market.”

With cattle prices remaining stagnant, and prices for product and the gas needed to ship cattle across the U.S. going up, Booth's bottom line is down about 5% a herd.

“We need folks going to restaurants and keep eating steaks, we need moms and dads cooking hamburgers so that we can stay in business,” Booth said.​

Just like the cost for Central Florida ranchers with their cattle, the costs of each production stage from cattle becoming beef have seen their costs go up which makes its way to consumers when the beef is ready to be sold.