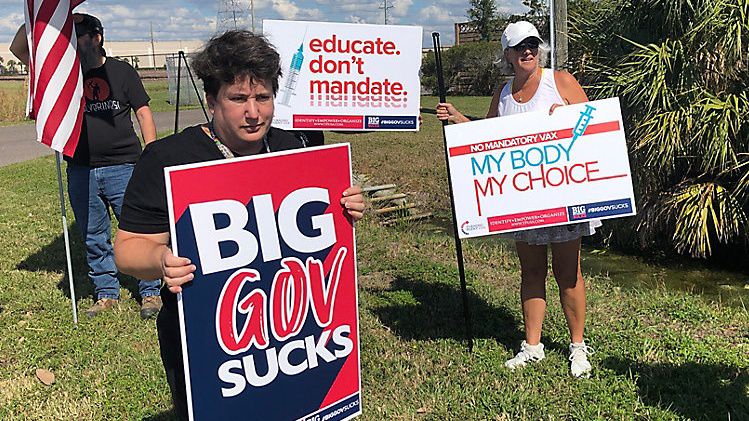 The protest was one of many held around the country on Wednesday.

PINELLAS PARK, Fla. — James Grambor has worked as a fabricator for defense contractor Lockheed Martin in Pinellas County for more than 17 years, but he took some time off his job on Wednesday afternoon to protest the pending mandate from his employer to get a COVID-19 vaccination next month.

“I’m very afraid of losing my job,” he said about his refusal to get vaccinated. “But not afraid enough to put something in me my religion stands against and that my morals stand against and ours should stand against.”

Similar protests by employees working for defense contractors have been taking place around the country. They began after President Joe Biden issued an executive order in September requiring federal contractors to ensure their employees are vaccinated against COVID-19 and following masking and social distancing policies. The administration set a Dec. 8 deadline for contractors to implement those requirements.

The protests have grown to the point that that defense officials are concerned that crucial weapons programs could face delays if enough skilled workers leave their jobs rather than get the job, POLITICO recently reported.

The Biden administration may be relenting on how hard that Dec. 8 deadline really is, however. According to guidance released by the White House earlier this week, if a federal government contractor’s employee refuses to get vaccinated and doesn’t have a pending request for an accommodation, there are additional measures that the employer can do short of firing him or her, including counseling and education. “Removal occurs only after continued noncompliance,” the new directive says.

Some employees say the protests against mandating vaccinations are working.

“I think it’s showing the administration and everybody else in the country that we’re not going to do it, and you know, if we have to, we’ll go,” said Don Bryant, who began as a machinist at Lockheed Martin in 2002 and now works on assembling C-130 Hercules planes.

Bryant says firing experienced employees like himself for not getting a COVID vaccine would be a problem for Lockheed Martin.

“If they have to bring somebody else in with no experience it’s going to take them a few years to figure out the stuff that I’ve learned over the course of my career,” he said. “Lockheed has to put out a certain number of planes per year to fulfill the contracts, and if you ain’t got the people to put out the planes, it’s going to affect us.”

John Drignet has worked at Lockheed for 13 years. He declined to say what he does for the company.

“It’s a great company to work for, but then all of a sudden now with this vaccine and this mandate stuff, it’s just crazy what they want us to do,” he said.

Kenneth B. Ross, the director of communications and public affairs with Lockheed Martin Aeronautics, sent this statement to Spectrum Bay News 9 regarding the protest.

“Lockheed Martin is following a U.S. federal government requirement for all federal contractors and subcontractors with a covered contract to observe COVID-19 safety practices (i.e., masks and physical distancing) and become fully vaccinated, except in limited circumstances where an employee has an eligible accommodation. As a means of fully complying, we are taking necessary steps to ensure a smooth implementation, including providing a system for employees to upload their proof of vaccination, get vaccinated and access a standard accommodations process for individuals unable to get vaccinated because their health status or sincerely held religious belief prevents it.

“We recognize this U.S. government compliance mandate will be difficult for some employees who may object to getting vaccinated. It’s important to emphasize that this customer mandate is essential to our ability to continue doing business with the U.S. government.

“Lockheed Martin plays an essential role as part of the national security industrial base, supporting the critical missions of our customers in the United States and abroad. As we have done throughout the pandemic, we continue to follow federal, state and local mandates, including those requiring vaccinations. We also use other best practices to mitigate risks and protect the health and well-being of our employees and partners, while ensuring we meet our commitments to national security.”