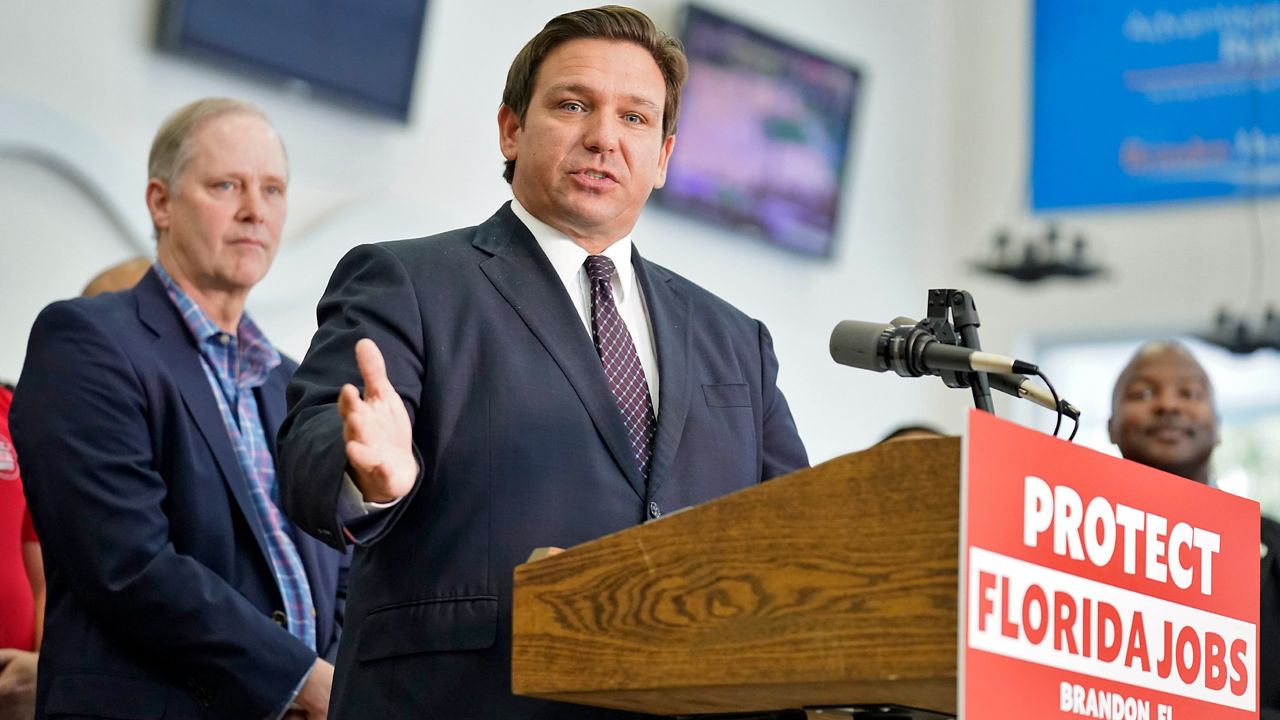 Florida Gov. Ron DeSantis speaks to supporters and members of the media after a bill signing Thursday, Nov. 18, 2021, in Brandon, Fla. DeSantis signed a bill that protects employees and their families from coronavirus vaccine and mask mandates. (AP/Chris O'Meara)

Gov. DeSantis: 'Nobody should lose their jobs because of these COVID jabs'

"Nobody should lose their job because of these COVID jabs," DeSantis said during the press conference in Brandon, Fla.

The most contentious measure would prevent private businesses from having vaccine mandates unless they allow workers to opt-out for medical reasons, religious beliefs, immunity based on a previous infection, regular testing, or an agreement to wear protective gear.

"What (President Joe) Biden is doing is not constitutional," DeSantis emphasized. "There has never been a federal vaccine mandate imposed on the public....They don't have the power to do it. There is no federal police power."

Gov. DeSantis: "Nobody should lose their job because of these COVID jabs."https://t.co/5bfGhAWjPX pic.twitter.com/3elT6KhtBW

The state health department, which is led by Surgeon General Dr. Joseph Ladapo, who opposes mandates, will be tasked with defining standards for the exemptions.

Republican Sen. Jeff Brandes thinks this is a worthy fight. "Having standardized measures by which individuals can go to their companies and say, 'I have a religious exemption, I have a medical exemption, I had COVID before,' I think those are appropriate."

The measure also includes fines for businesses that fire a worker without allowing the exemptions. Additionally, it bars schools and governments in the state from having vaccine mandates and allows parents to sue schools with masking requirements. Another bill would block the public release of records regarding state investigations of vaccine policies in businesses.

"We hear so much about all these things, mandates, restrictions, tearing people down. Today, we lift people up. We provide protections for people. No nurse, no firefighter, no police officer, no trucker, no anybody should lose their job because of these COVID jabs. And that's what we're doing. We're making sure people have a right to earn a living," DeSantis said at Thursday's event in Brandon.

HAPPENING NOW: In Brandon to sign the bills approved at this week's special session, Gov. Ron DeSantis said the main purpose of fighting vaccine mandates is to protect jobs and "lift people up." https://t.co/5bfGhAWjPX pic.twitter.com/E8r5DIg6VR

DeSantis added during Thursday's ceremony, "We're actually doing a science-based approach. For instance, we are recognizing people with natural immunity....People say you need to mandate, but we know -- and the data is very clear at this point -- that this vaccine is not preventing COVID. So to say this should be mandated when people are still getting it, it should be a personal choice."

Republican leadership said they are proud of the result of the special session and that they are ready for a legal battle with the Biden administration.

.@GovRonDeSantis on the reason for these bills he's about to sign:
"We are respecting peoples’ individual freedom in this state."
(loud cheers).

Democrats have repeatedly slammed the legislation as dangerous to the public and burdensome to businesses. They also said the special session amounts to political theater meant to serve DeSantis’ political ambitions.

“The Special Session to promote the DeSantis presidential campaign has ended and he’s signed the bills into law," Florida state Rep. Evan Jenne (D-District 99) said. "Floridians are less safe, and we have set public health back generations. This political stunt further divides Florida at a time when we needed to pull together to literally save our neighbors’ lives. Laissez-faire epidemiology and outright disinformation have contributed to Florida’s horrific death toll, and it’s shameful that some choose to politicize an epidemic for their own ambition.”

State Rep. Fentrice Driskell of Tampa disagreed with the governor's stance, saying, “Today, the governor and GOP leaders celebrated the creation of the DeSantis Ambition Tax, which will cost Florida businesses millions of dollars and make everyone less safe," Driskell said. "They have denied Florida businesses the ability to protect themselves, their workers,and their customers. This will endanger us, our visitors, our economy, and our reputation as a safe place to bring your family. Governor DeSantis is robbing Floridians of the freedom to be healthy, prosperous, and safe.”

The legislation also provides funding to study how the state could leave U.S. Occupational Safety and Hazards Administration