.@FLOTUS and @POTUS serving some “Friendsgiving” favorites to the service men and women at Fort Bragg pic.twitter.com/93paKmgxiV

The first lady was joined by father-son duo Russell "Rusty" and Beau Estes, who grew this year’s tree that will live in the Blue Room of the White House, along with their families and young children. The group traveled from Jefferson, North Carolina to present the tree to the first lady and for a tour of the White House grounds. 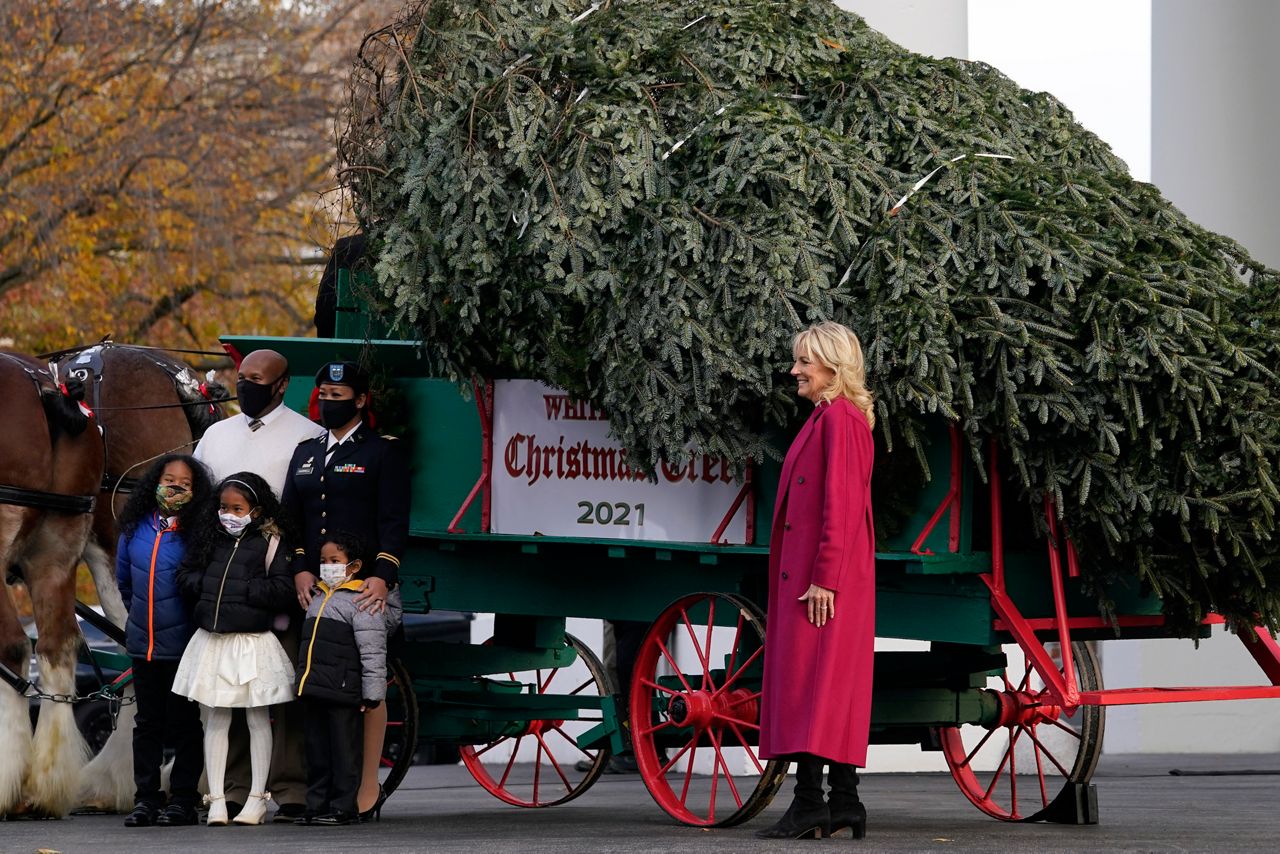 First lady Jill Biden, right, and others pose for a photo with the official 2021 White House Christmas Tree, grown in North Carolina, as it arrives at the White House in Washington, Monday, Nov. 22, 2021. (AP Photo/Susan Walsh)

Also present was the Harrell Family; Captain Maryanne Harrell serves as the unit commander for Washington, D.C.’s Army National Guard Medical Detachment. The first lady, who has a deep and personal connection to the armed services, invited the family in “honor of all the National Guard families who are activated and spending these holidays apart,” per a statement from her office.

The first lady offered a message to service members and their families, telling them to “be safe and have a happy, healthy holiday."

Championing military families is a familiar effort for the first lady. During her time as second lady, Dr. Biden and then-first lady Michelle Obama launched Joining Forces, a program whose mission was to encourage the public and private sectors to support service members, veterans, their families and their caregivers.

Dr. Biden renewed the effort at the outset of her husband’s presidency, and has already hosted a slew of events aimed at military families during her 10 months as first lady.

Joining Forces will take Dr. Biden and President Joe Biden on yet another holiday-themed trip to honor service members Monday evening, as the two will travel to Fort Bragg to celebrate “Friendsgiving” with military families.

Monday’s Christmas reception was one of several ceremonies passed down from administration to administration. Another came last week, when President Biden issued pardons for two turkeys named Peanut Butter and Jelly, saving them from becoming Thanksgiving dinner. 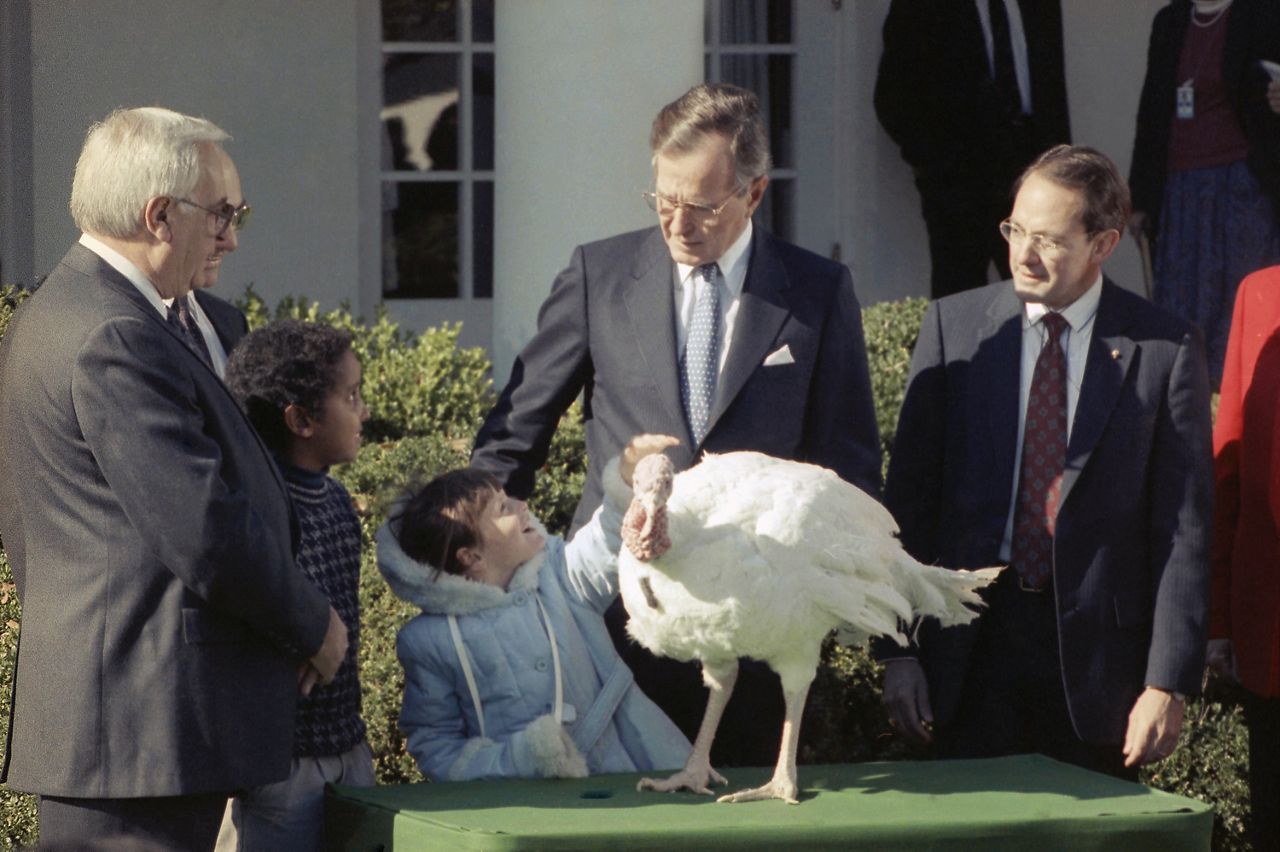 President George Bush and Shannon Duffy, 8, of Fairfax, Va., look over a Thanksgiving turkey presented to the president at the White House in Washington by the National Turkey Foundation, Nov. 18, 1989. (AP Photo/Marcy Nighswander)

The turkey pardon became an annual tradition under President George H.W. Bush in 1989.

The modern White House Christmas tree tradition dates back to 1966, when the National Christmas Tree Association held its first nationwide competition to choose a tree for the residence of the president and first lady.

Tree growers must first win a statewide or regional competition before entering for National Grand Champion, the final tree that travels to the White House.

Monday’s visit was the Estes’ third time providing the White House with their official Christmas tree: In 2008, then-first lady Laura Bush accepted the Estes’ fir; in 2012, then-first lady Michelle Obama again welcomed a tree from the family into 1600 Pennsylvania Avenue. 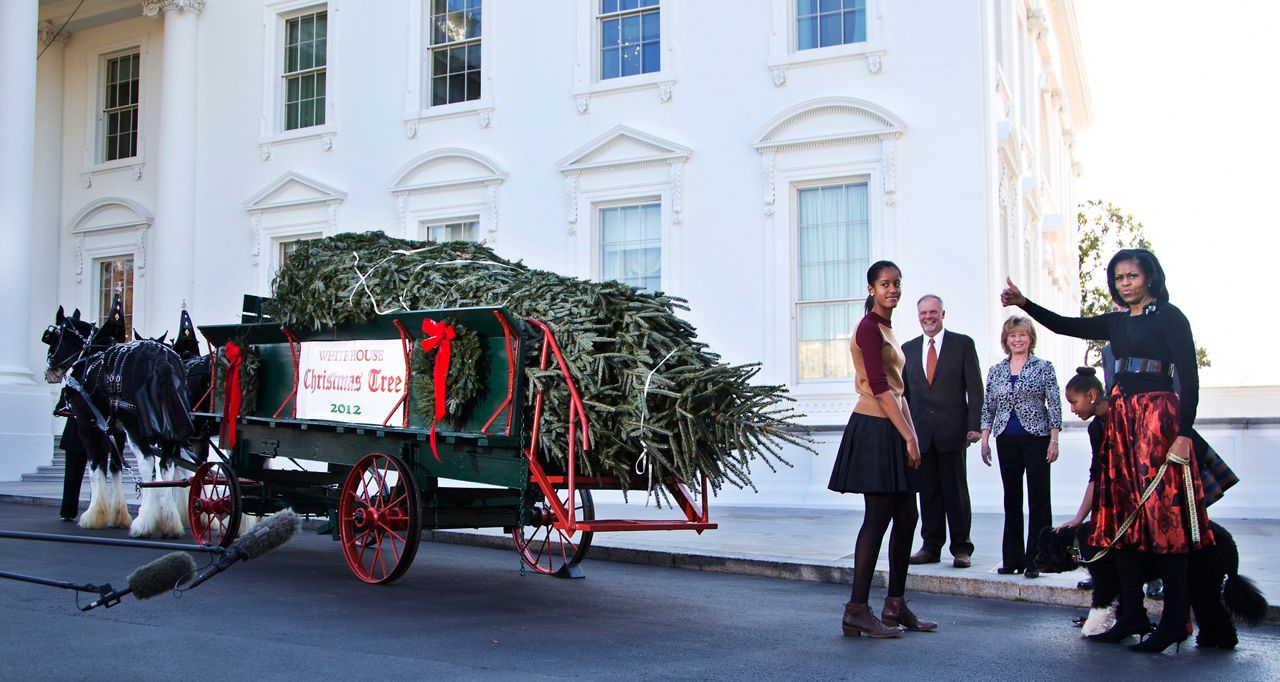 First lady Michelle Obama with daughters Sasha, behind the first lady, and Malia, left, and family dog "Bo" flashes a thumbs up as they welcome the arrival of the official White House Christmas tree Friday, Nov. 23, 2012. (AP Photo/Manuel Balce Ceneta)

North Carolina holds the state record for most Christmas trees to be featured in the White House Blue Room at 13; Pennsylvania and Wisconsin come in second and third, with 11 and eight trees respectively chosen for the White House.