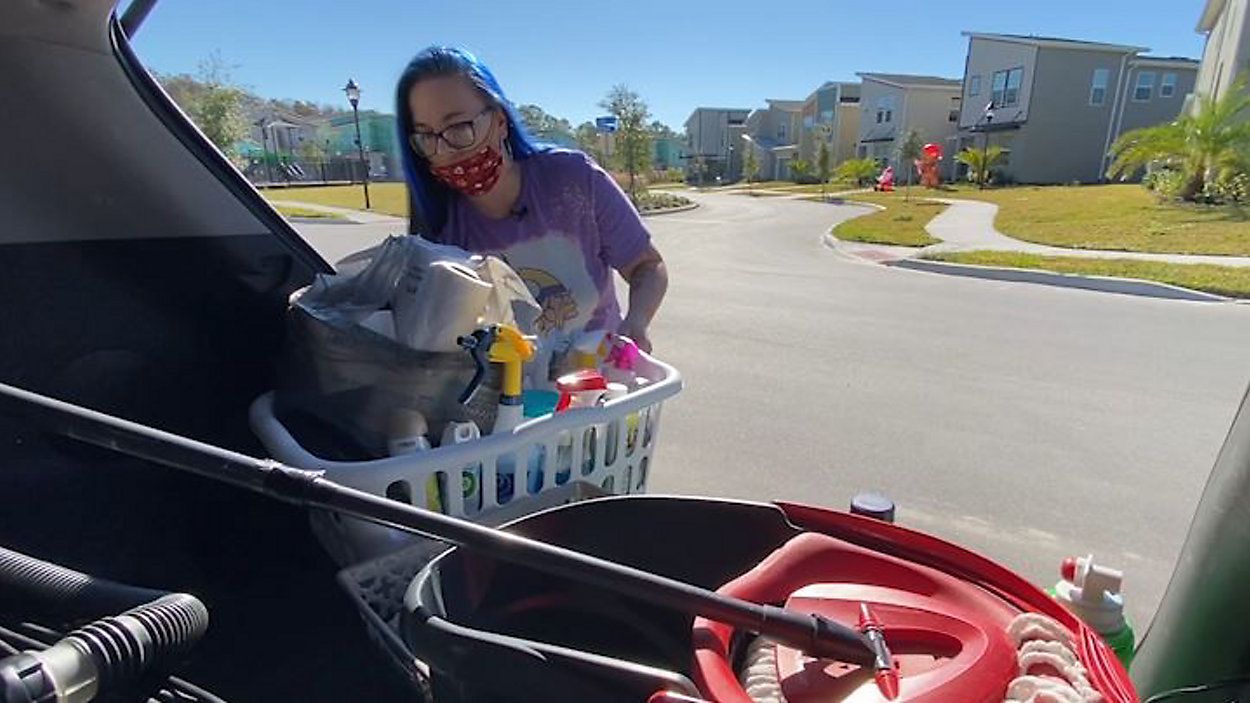 Walking away: Why millions of workers are leaving their jobs

The month of September set a national record when 4.4 million Americans quit their jobs, many without anything else lined up.

Samantha Rivera, 28, originally had no plans of leaving her serving job.

“I was in customer service for a little bit. I did vacation sales for a bit,” Rivera said. “I never really found my niche, but I knew one thing I was good at — cleaning.”

When the pandemic hit in early 2020, Rivera found herself among those laid off. She could not imagine then how the pandemic would end up opening a new door of opportunity.

Using stimulus funds, Rivera bought a basket of cleaning supplies, filed an LLC (Limited Liability Corporation) and launched her own home cleaning business — Another One Fights the Dust.

She’s a year in and still trying to grow. She is getting to set her own hours, her pay, and set her future. It’s hard work, but Rivera said it’s far better than where she was when she was serving in restaurants.

“It’s like a slap in the face, you know, to go to work, hustle so hard get cussed at by tables, not making tips on tables,” Rivera said.

Changing anything in life is not easy, she admits. Being laid off put life into perspective. So did facing the woes of Florida’s crippled unemployment system.

Rivera said if you want to know why people are leaving jobs behind, consider many were in low wage jobs, given no help, and no reason to stick around.

It took her six months before she saw unemployment benefits.

In the meantime, she said she took a job at a gas station that paid $11.50. Even working 40 to 60 hours a week, Rivera said her monthly paycheck would never total more than $1,200.

A challenge considering rent was $1,300. Affordable housing is another issue, compounded with low pay, Rivera said.

This year, she had to leave where she was living in Polk County, and has since ended up in Volusia County. She doesn’t have family in the area, but it was the only place that was the right place, at the right price.

Rivera is not the only one looking for occupational change.

Pamela Nabors, President/CEO of CareerSource Central Florida said workers from all wage levels and all walks of life are making moves. “Whenever there’s a disruption in the labor market like we’ve seen this last year, people reexamine what they’re doing in their career, what they want to do in their long term career and what their goals are,” Nabors said.

In the last year — in their 5 county service region in Orlando — CareerSource Central Florida alone has helped more than 54,000 people find new jobs. Thousands were provided grants and assistance to go through job training and certification programs.

Nabors said those who went through their programs and services are earning an average of $17 per hour; $7 per hour more than Florida’s minimum wage.

Wage is one direct product of the changing labor market. Companies are now having to boost benefits and pay to cover staffing needs.

Nabors said hospitality and education are two industries seeing many workers walk out, but opportunities remain.

“We continue to see people go into training particularly as you can imagine, logistics and warehousing” Nabors said. “We’ve trained a lot of truck drivers, (because there’s a) tremendous need for not only CDL truck drivers to deliver goods coming for the holidays, but school bus drivers and all of our districts as well as tourism industry and drivers for public transportation LYNX system.”

CareerSource Central Florida said the top 7 industries hiring in the region are:

As tough as the last two years have been, Rivera welcomes the fresh start. She hopes to one day grow her business, have several employees, and enjoy the fruits of her labor.

“I really, truly never thought in a million years I’d have my own business, but honestly it’s one of the better decisions I ever made to do this,” Rivera said. “So, if I had any advice if anyone wants to start their own business just do it. Just do it.”