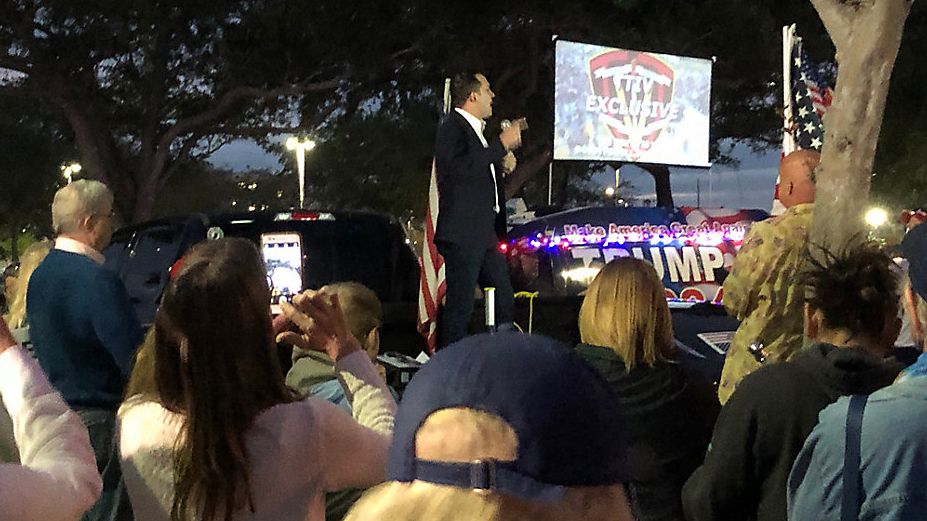 Hundreds observe anniversary of Jan. 6 in St. Pete and Clearwater

As hundreds of people gathered in South Straub Park in St. Petersburg for a “Vigil for Democracy” event to mark the horror of the Jan. 6, 2021, attack on the U.S. Capitol, more than 150 conservative activists gathered in Clearwater to blast the mainstream media’s interpretation of that day, and give praise to a “political prisoner” who remains held in the Pinellas County Jail for his participation.

Jeremy Brown is a retired special forces U.S. Army officer who served 20 years in the military. He was arrested in late September on charges of entering restricted grounds and possession of unregistered firearms.

Brown has been sitting in the Pinellas County Jail for months without bail after a federal judge ruled that he had threatened federal law enforcement officers.

There were several congressional candidates who spoke in Clearwater on Thursday, including state House member Anthony Sabatini and Cory Mills, both of whom are running in the Central Florida Congressional District 7 race.

“I think it’s interesting how the Democrats have continued to say that the January 6th was quote unquote an ‘insurrection,’” Mills said. “But yet the multiple riots that were destroying blocks after city blocks. Destroying businesses. Murdering people like David Dorn.Those were just ‘peaceful protests’, according to the Democrats.”

Dorn was a retired police captain in St. Louis who was killed on the same night as protests about the death of George Floyd took place.

Christine Quinn, who is now running for the Pinellas County Congressional District 13 seat, took aim at certain members of the Republican Party.

“Are we not smarter than the people in politics, right now?” she asked the crowd while standing on the back of a flatbed truck. ”I mean, if anything, we should be so upset with our Republican representation because in 2016, we had the House. We had the Senate. And we had Trump. And still Trump couldn’t get anything passed.

"Why couldn’t Trump get anything passed? RINOS.” she added, as the crowd chanted in unison, using the acronym to describe what is derisively known as “Republicans in name only.”

Meanwhile at South Straub Park, hundreds of progressive citizens showed up to a “Vigil for Democracy” event, one of a number held throughout the country (including in Tampa and Bradenton).

“Tonight 250 local residents came here to ensure that the attack that took place a year ago doesn’t happen," said John Stewart with Declaration for American Democracy. "That was as assault by militias, and militants, many of them armed, saying the person you voted for, we don’t like him. He’s not going to win."

He called on the crowd to call Florida’s U.S. Sens. Rick Scott and Marco Rubio and tell them to support two voting rights bills being pushed by Democrats in Congress — the John Lewis Voting Rights Act and the Freedom to Vote Act.

Congressional District 13 Democratic candidate Eric Lynn was asked what it would require to ensure that Jan. 6, 2021, doesn’t happen again. Communication is key, he said.

“We need to work on our intelligence sharing," he said. "We need to make sure that our Capitol Police is gaining intelligence from the FBI, from the Secret Service, from other police forces. Something that didn’t happen on January 6th in the way that it really needed to.”