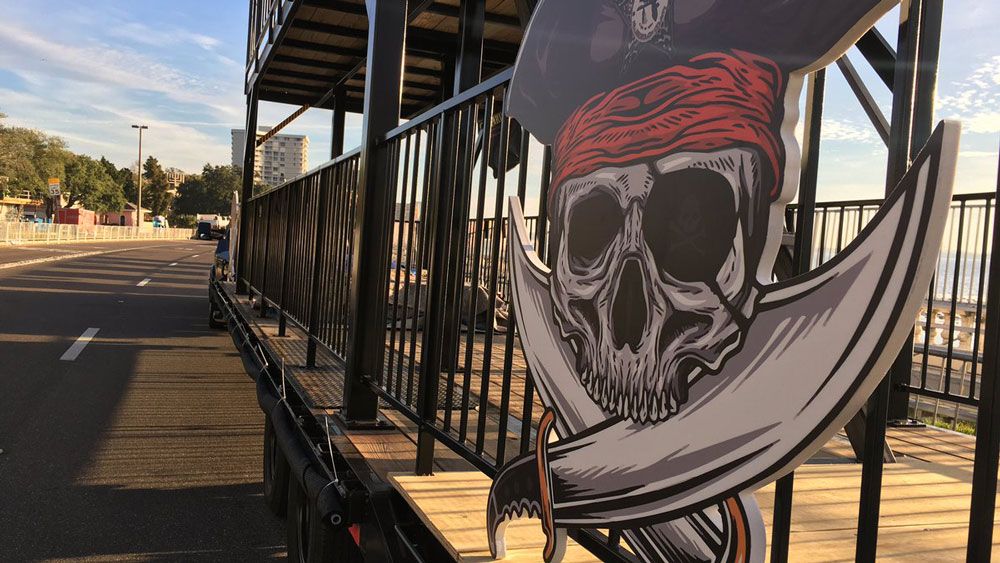 Gasparilla 2022: What you need to know

UPDATE: Because of expected inclement weather, the Gasparilla Invasion sailing route has changed. According to a new press release, the Jose Gasparilla will now go "up the Ybor Channel, around Harbour Island, and into the Seddon Channel," ahead of demanding the key to the city at 1 p.m.

TAMPA, Fla. — Avast, landlubbers! Pirates are battening down the hatches and sharpening their swords ahead of their invasion of Tampa Bay Saturday for the Gasparilla Pirate Fest!

Tampa missed out on many of the celebrations last year because of the pandemic, but this year, things are back in full swing!

For those that are new to the area, think of Gasparilla as Tampa Bay's Mardi Gras, only much more fun, because there are pirates, eyepatches, treasure chests and more! In fact, it's widely considered to be the third-largest parade in the world!

Tampa has celebrated Gasparilla every year since 1911, when a local merchant decked out their boat in pirate regalia and "invaded" the city. The ship that invades nowadays, the Jose Gasparilla, has been around since 1954 and is the only remaining fully-operational pirate ship in the world!

Here's what you need to know to get in on the fun this year! 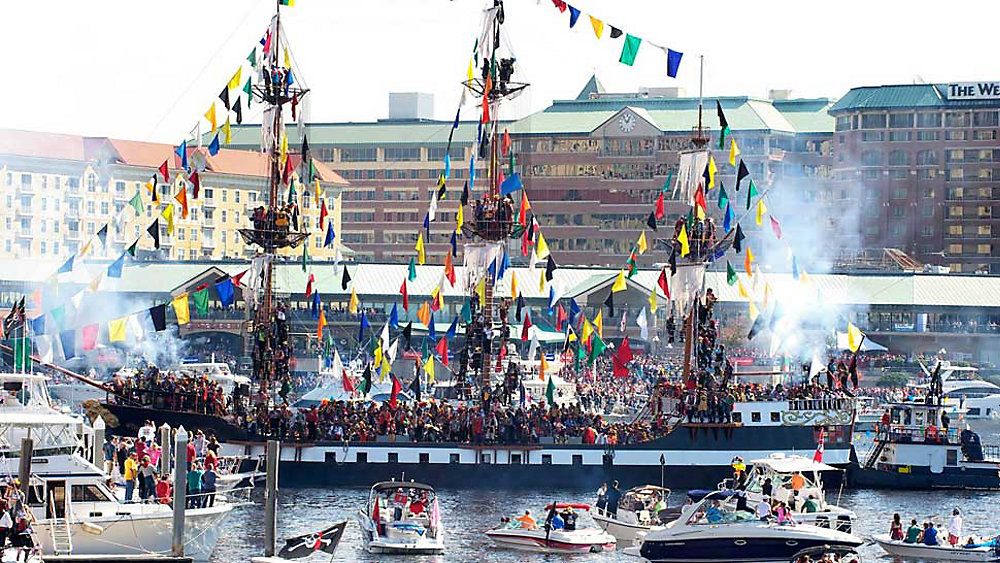 The 2022 Gasparilla Pirate Fest kicks off on Saturday, Jan. 29, with cannon fire!

From 11:30 a.m. to 1 p.m., the Jose Gasparilla pirate ship leads the hundreds of boats in the Gasparilla Flotilla in an invasion of Tampa! Each ship is filled to the brim with fearsome — but loveable! — pirates, part of Ye Mystic Krewe of Gasparilla!

Their search for treasure will bring them across Hillsborough Bay and up to the Seddon Channel near Davis Island and Harbour Island. The invasion — and the party — officially begins when the ship docks at the Tampa Convention Center and Mayor Jane Castor surrenders the treasure these pirates have been after: the Key to the City!

Once the loot is in hand, the band of pirates will celebrate down Bayshore Boulevard, with everyone that came out to witness the invasion! The Mystic Krewe will share the wealth, throwing out all sorts of goodies to everyone in attendance in the Gasparilla Parade of Pirates, running from 2-6 p.m.

It's free to attend. All you will need to do is find yourself a nice spot to watch the party and have some fun! You'll want to get out there early. The city says it expects more than 300,000 spectators to witness the pirate invasion! More than 140 parade floats and vehicles are expected to be on display!

The city also is allowing festivalgoers to reserve a parking spot early. The city also has provided a map of parking and viewing locations that are more accessible for festivalgoers with disabilities. However, if you do plan on driving to the festivities, please drink responsibly or consider taking a rideshare service.

The city has also outlined where it is legal to consume alcohol outdoors, just remember that no glassware is allowed.

One change this year: City officials are encouraging festivalgoers to ditch the plastic beads with their "Bead Free Bay" initiative. Tens of thousands of beads get thrown to crowds along the Tampa Bay parade route — and many wind up in the waters where they can have detrimental long-term effects on marine life. In fact, throwing these beads into the water is actually illegal, under Florida Statute 403.413. So this year, you're encouraged to ditch the beads and have a blast without the waste!

If the parade isn't your thing and you're more of a music fan, there will be live concerts at Curtis Hixon Waterfront Park and MacDill Park before (starting at 10 a.m.) and after the parade.

Parking will be available at a number of garages, according to the City of Tampa.

Close one Eastbound Lane and one Westbound Lane on Bay to Bay Boulevard from MacDill Avenue to Ysabella Avenue.

The Tampa Police Department is encouraging boaters to watch the invasion from land on Saturday because of small craft advisory in effect from 10 p.m. Friday to 7 p.m. Saturday. The National Weather Service said conditions will be hazardous to small crafts and inexperienced mariners should avoid navigating in the water. Recreational boaters who plan to participate in the Gasparilla Pirate Invasion should check www.weather.gov for updates prior to getting underway.

The Tampa Police Department is reminding everyone alcohol can only be consumed in the approved areas along the parade route. Drinking in the neighborhoods will not be allowed.

Some crucial tips for landlubbers experiencing their first pirate invasion!

First, make sure you wear sunscreen. Florida is not called the Sunshine State for no reason. With all of the fun happening, it's very easy to lose track of time and wind up with a sunburn. Maybe even sport a pirate hat of your own with some nice shades to keep the sun off of you.

Stay hydrated! Between the heat and any alcohol you may enjoy, it is very important to bring water and stay hydrated throughout the day to avoid any discomfort or even health emergencies. On a similar note, bring some snacks with you to munch on throughout the day. Of course, make sure you toss out your drinks and snacks in the trash or recycling, instead of littering.

Some vendors are only accepting cash, so while there will be ATMs along the parade route, it's a good idea to take out some cash beforehand for the day.

If you plan on celebrating at home, be sure to tune into Spectrum Bay News 9. We'll have coverage of Gasparilla all day long!

Speaking of Spectrum Bay News 9, be sure to tune in or check the Spectrum News app to see the weather forecast before you head out!

One final tip: The Gasparilla Pirate Fest on Jan. 29 is not the only way to have some swashbuckling fun this Gasparilla season. There are more big events to be aware of this year!

If you've got a little pirate captain eager to set sail and enjoy this adventure, you should know the city hosts a children's festival a week before.

On Saturday, Jan. 22, from 11 a.m. to 7 p.m., little pirates can enjoy a parade of their own along Bayshore Boulevard, starting at Bay to Bay Boulevard and ending at South Edison Avenue!

At the end of the festival, enjoy the Gasparilla "Piratechnic" Extravaganza fireworks, launching at 7 p.m.

Registration is still open for this run. This is the first time the city is hosting this in-person along Bayshore Boulevard since 2020! Whether it's a 15K or a 5K, do your best, enjoy the fresh air and have fun!

Artists will invade Tampa in their own way, flooding Julian B. Lane Riverfront Park with wondrous creations the likes you've never seen!

Legend tells us that the notorious pirate José Gaspar, also known by his nickname, Gasparilla, based his nefarious operations out of an island off the coasts of Lee and Charlotte counties.

From there, he raided and plundered shipping lanes and towns along the Gulf Coast, doing what pirates are wont to do — yo ho, yo ho, a pirate’s life for him and all that good stuff. According to josegaspar.net, he was credited with capturing over 400 ships between 1789 and 1821, and supposedly he buried his enormous treasure on the island he called home, known in modern times as—surprise!—Gasparilla Island.

The legends also say Gasparilla met his end after attempting one last capture. He thought he was going after a British trader, but he realized too late the ship he was attacking was the United States Navy pirate hunting schooner U.S.S. Enterprise.

The Enterprise tore Gaspar’s ship to shreds with cannon fire, but the pirate would not be taken alive. Instead, he wrapped a heavy chain around himself and leaped from the bow of his ship into the murky depths of the ocean.

None of Gasparilla’s treasure was ever recovered.