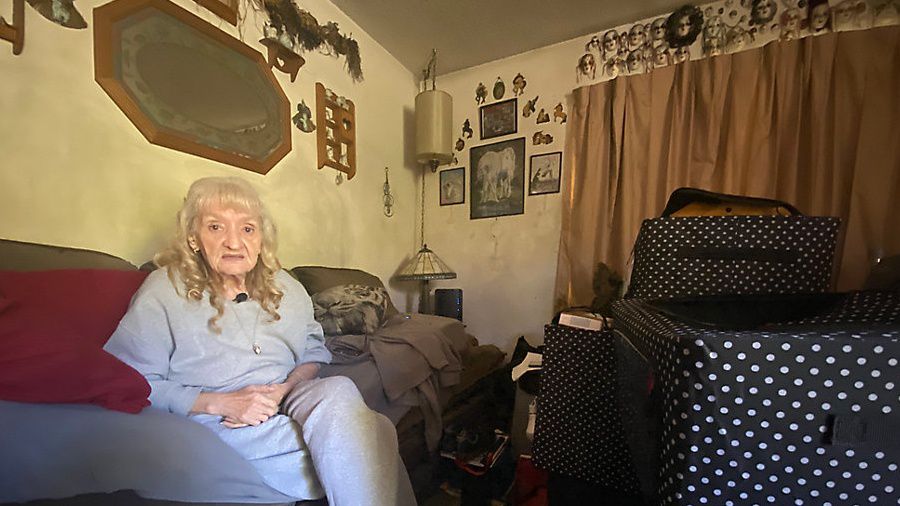 Rebecca Ferguson sits in the Palm Bay rental apartment where she's lived for the last 30 years.

In Palm Bay, rent hikes are pushing some seniors into homelessness

PALM BAY, Fla. — For 30 years, 80-year-old Rebecca Ferguson has rented the same apartment in Brevard County. But now that the property’s been sold, she’ll be homeless by January’s end — unless she can prove she makes three times the increased rent.

Previously, Ferguson says she paid a lower, adjusted monthly rent based on her small, fixed Social Security income. She’d expected her rent to go up this year, to $600 — a slight increase from what she usually pays. But instead, Ferguson said the new owners want $1,200 a month.

In a Dec. 30 letter to Ferguson, local company Showcase Property Management laid out the terms Ferguson would have to meet in order to stay in the one-bedroom unit she’s called home for the last 30 years.

“The owner has decided to consider you to continue residing at the property,” the letter began. It went on to explain that Ferguson would need to pay market rent — and prove she makes three times that amount — in order to remain in the unit.

Since receiving the news, Ferguson has been consumed by fear about what her future holds, unable to eat or sleep properly. She says she’s sought out other housing options to no avail, walking alone for miles to visit rental properties and senior living facilities whenever nobody is available to drive her around.

Everywhere she goes, it’s the same bad news. Senior communities tell Ferguson they have years-long waitlists for new residents. And at rental properties, Ferguson says she keeps hearing the same thing: It’s a no-go if she can’t prove she makes three times the monthly rent.

“If I was making all that money, I wouldn’t be asking for help. I’d be gone,” Ferguson said through tears. The former Key West police officer says she’s lost tons of weight in the last three months, as she struggles to accept her new, largely uncertain reality.

“I’m at the end of my rope,” she said in her living room one recent afternoon, dwarfed by the stacks of boxes around her, which Ferguson says she’s packed by herself without any sense of where her belongings will ultimately wind up.

The few local friends Ferguson has are helping her move boxes to storage and scout out new potential housing options nearby. But time after time, all they hear is “no.”

“I don’t understand why they’re doing this to me,” Ferguson said tearfully, referencing the new property owners. “Don’t they have mothers and grandmothers?”

The quadruplex where Ferguson lives was valued at $185,000 last year, Brevard County property records show. But in November, it sold for nearly twice that amount: $364,000.

It’s just one example of inflated housing prices across the nation, the result of multiple COVID-era factors in a market that was already suffering from a lack of housing long before the pandemic took hold.

Perhaps nowhere else is more illustrative of today’s affordable housing crisis than Florida, which already ranked among the country’s worst states for housing affordability, before COVID-19. Now, in the past year, industry experts say Florida saw the largest rent increases of anywhere else in the country.

A huge part of the problem comes down to high demand and low supply. Florida was already a popular place for snowbirds and retirees to relocate — but now, with the onset of more remote work opportunities, droves of higher-income earners from the West Coast are moving to the state, as Spectrum News has previously reported.

He explained how during the pandemic, some applicants have offered hundreds of dollars above the advertised monthly cost of rent. These would-be tenants generally hail from more expensive areas like Miami and New York, where such rental “bidding wars” aren’t as rare.

“It’s hard for an owner to say no” to an applicant offering so much more than the asking rent price, Bright said.

In terms of dollars, the average Palm Bay rental now costs $1,429, Lybik wrote in an email.

Adding to demand pressures, more people moved to Palm Bay last year than almost anywhere else in the nation, according to U-Haul’s annual Growth Index, which tracks how many one-way routes the moving truck company books to different cities. For 2021, Palm Bay came in third place. It was one of 10 Florida markets topping the list, including Kissimmee-St.Cloud, which ranked first.

After her former husband passed away in July, Ferguson said she learned her monthly social security stipend was increasing significantly from the $768 she usually received. Now, government paperwork shows she receives $1,562 each month.

If she had to spend the majority of that benefit each month on $1,200 for rent, Ferguson would struggle to survive – but she said she’d still pay it, if only she could. It’s not possible, though, under the new owner’s requirement that tenants to show they earn three times the monthly rent.

“(Ferguson) has never been late with her rent in the 30 years she has been there. She has always cared about the property and kept me informed of any issues,” wrote former owner Lisa Anderson, who bought the property in 1992.

In all that time, Ferguson said, none of her appliances were ever replaced. She didn’t mind, since her rent was so low. But now, especially given that lack of upkeep on her unit, she’s baffled by the higher rent new owners are demanding.

After learning of her beloved former husband’s death last summer, Ferguson thought she couldn’t handle any more bad news. She’d already outlived her eldest son, who died of kidney failure in 1998; Ferguson moved to Brevard from Key West to care for him until he passed.

All she wants is to find somewhere — anywhere — she can afford to live, before it’s too late.

“Just somewhere I can lay down, go to sleep,” Ferguson said.