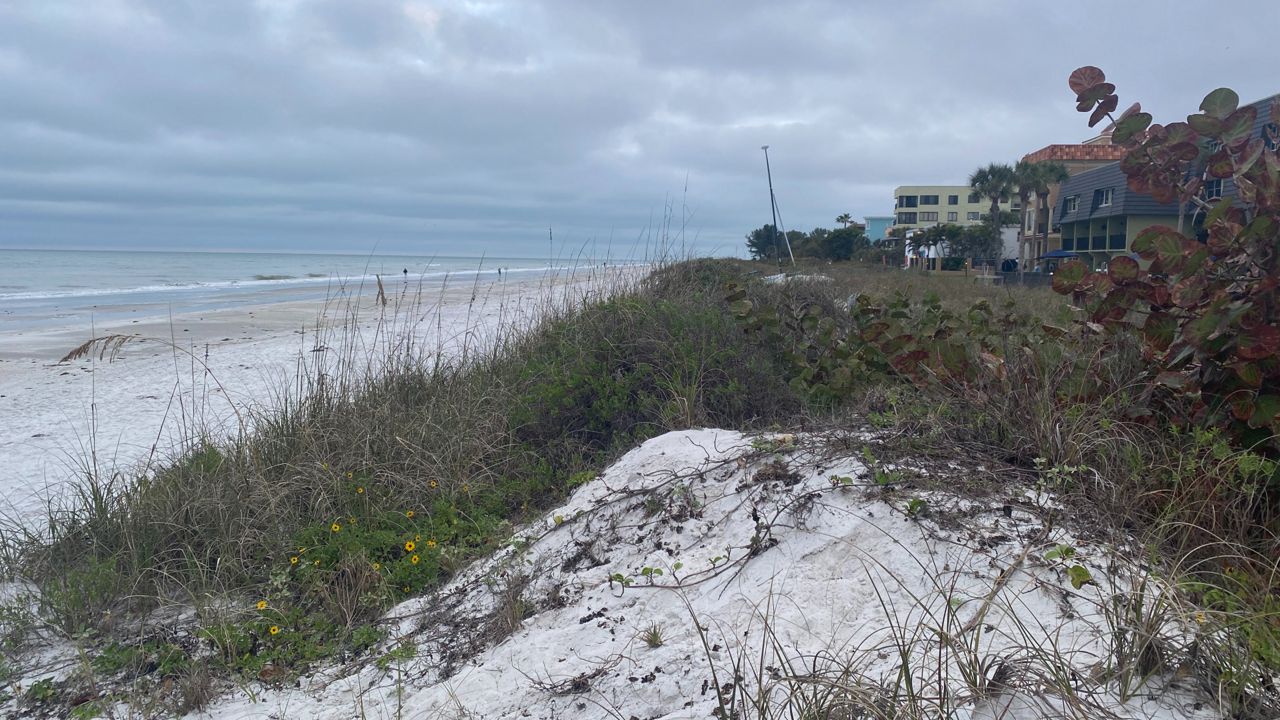 Every six years since the late 1980s, more than one million cubic yards of sand has been moved into the 9-mile stretch of beach from the Crescent Beach Club area in Clearwater to the north end of Redington Beach. (Spectrum Bay News 9/Angie Angers)

PINELLAS COUNTY, Fla. — A renourishment project aimed at protecting and preserving 9 miles of Pinellas County beaches has hit a roadblock.


Every six years since the late 1980s, more than 1 million cubic yards of sand has been moved into the nine-mile stretch of beach from the Crescent Beach Club area in Clearwater to the north end of Redington Beach.

John Bishop, Coastal Management Coordinator for Pinellas County, said that stretch of beach didn't exist before the renourishment projects began roughly 30 years ago. For the most part, the ocean went up all the way to the seawall, leaving only a small strip of soggy coastline, he said.

"All of these dunes and beach are manmade, this isn't a natural beach," Bishop said. "It may look natural, but it wasn't here 30 years ago."

The next renourishment project was slated for 2024 but won't be happening on schedule, he said.

The Army Corp of Engineers is now requiring that Pinellas County get all beachfront property owners to sign easements so federal dollars can be used. After working for roughly a year to obtain all of the signatures, the county only has 48% of them.

The easements are from the seawall to the erosion control line, which, in many cases on the stretch, is where the dunes begin.

"Until we solve this easement issue, this project probably isn't going to go anywhere," Bishop said.

These 2 pictures were taken from the SAME location 30 years apart.

A 9 mile stretch of beach from North Redington to Clearwater is actually manmade. It’s kept up because of renourishment projects every 6 years. Now, the next one slated for 2024 is in jeopardy @BN9 pic.twitter.com/SmJnizQL2l

Without the required easements, Bishop said they also can't replace the sand or repair the beach should a big storm hit.

Pinellas County is working closely with the Army Corp of Engineers to try and come up with a viable solution so they don't lose the beach.

"It's not going to happen overnight, but the beach will eventually go back to the way it was before," Bishop said.

The easement as it stands now would be "in perpetuity," which means the owner would lose rights to that area essentially forever, which is cause for concern for some property owners. ​