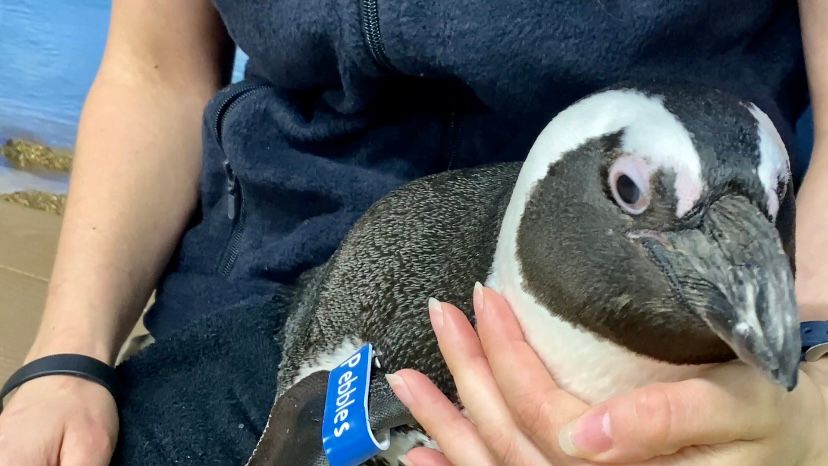 Biologist Maegan Gentry is holds Pebbles, a 15-year-old African Black Footed Penguin that she has known since he was four. (Spectrum Bay News 9/Bobby Collins)

The Florida Aquarium puts humans and penguins at eye level

Pebbles is a longtime resident of The Florida Aquarium, and he is eating fish with some of his new pals, courtesy of biologist Maegen Gentry.

“We have four new penguins in this area,” she said while handing out fish to a line of birds in their private habitat.

During the feeding, she announces the type of fish that each specific penguins eats, while fellow biologist Chrissy Beuchal takes notes.

The biologists follow the birds' diet closely to make sure they are staying healthy.

But the feeding was more than a meal — it was an opportunity for everyone to get acquainted, filppered or otherwise.

Gentry said that everyone was acclimating to each other, with the hope that strong bonds will form.

"I love it. I love working around them,” she said. “Penguins do have very big personalities and they are all very, very different from each other.”

Gentry has been hanging out with Pebbles, a 15-year-old African black-footed penguin, for more than a decade.

Coming only up to her shin, Pebbles follows Gentry around when she is working.

And when they hang out to bond, he will wiggle in her lap like a cat.

“It’s him showing affection, it’s him kind of flirting, so they’ll clap their flippers, they’ll shake their head,” said Gentry. “A lot of people ask if they are nervous he’s actually the exact opposite. He’s just very, very happy.”

Adding new birds to the colony at The Florida Aquarium meant adding new space — like the new visitor-facing habitat brings the penguins face to face with the public.

Gentry said it’s part of the species survival plan for this endangered animal.

“Having them on habitat is really important for people to learn about them, and of course to see them,” she said.

Aquarium officials hope that by watching Pebbles hanging out with his friends, people will champion their wild, imperiled counterparts.

In the meanwhile, the colony continues to grow — with another African penguin expected to be added to the mix in the next several months.