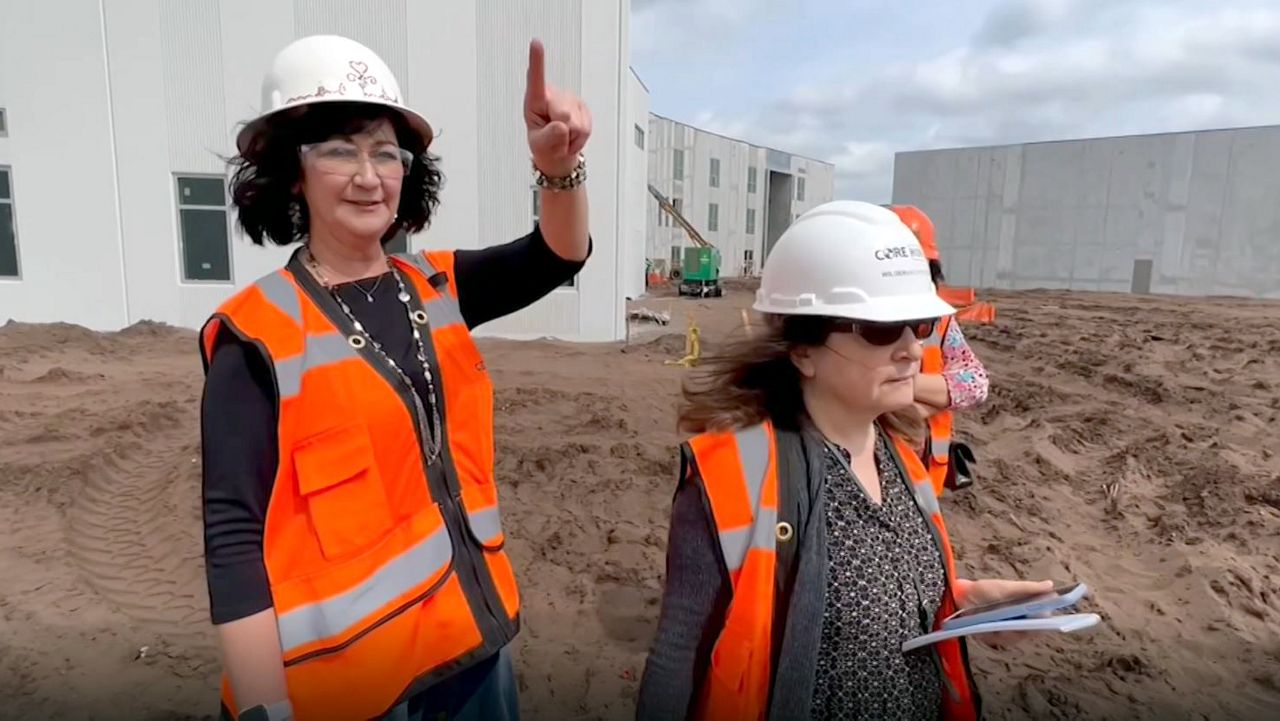 Principal Missy Lennard (left) looks over construction progress at the future site of Dorothy C. York Innovation Academy, which is expected to open to students in the fall. (Spectrum Bay News 9)

APOLLO BEACH, Fla. — Hillsborough County Schools showed off one of its newest schools in the southern part of the county Wednesday.

The Dorothy C. York Innovation Academy is still under construction, but officials said it will help alleviate overcrowding when it opens for the next school year.

They said the southern part of the county is the fastest growing area, and they have plans to build over a dozen new schools there within the next 15 years.

The Dorothy C. York Innovation Academy will have 1,600 seats for students, but some parents say even that might not be enough to take care of the overcrowding issue.

“It’s great we have another new school, but we need three or four more,” said Danielle O’Neil, whose daughter, Reagan, is in the fourth grade at Waterset Charter School.

O'Neil said her daughter has been attending the school since kindergarten. This year, though, there are a lot more students, and some don’t even always have a desk to sit at, she said.

“In my daughter’s classroom, it’s set up for 28, and they’ve had anywhere from 33 to 29 kids in the class,” she said. “So there’s had to be some creative shifting on the teacher’s parts as far as where they’re going to put these kids so that they’re still able to learn in an area and they’re not just sitting in a corner by themselves, but also not overcrowding the kids.”

While charter schools are operated independently, Hillsborough County Schools currently has seven schools in this area that are at, or over, capacity. To keep up with the growth, just down the street from Waterset Charter, is the Dorothy C. York Innovation Academy.

The Academy is the district’s new magnet school and is under construction in Apollo Beach. This new school will be for students pre-K through eighth grade.

Principal Missy Lennard came along for a construction tour of the school on Wednesday. She said as a south Hillsborough County native, she has seen the growth — and the need for more schools — firsthand.

“It’s been amazing to me to watch the community grow, so I’m hoping we will be able to provide relief to some of our schools, our surrounding community schools, that are running over capacity at this point,” she said.

And running over capacity is definitely a concern for O’Neil's family. She said she can only hope Hillsborough County will be able to keep up.

“Here in our neighborhood alone, there’s still another couple thousand homes coming in, so where are we going to put those kids?" she said. "Where are they going to go to school?”

Applications for the Dorothy C. York Innovation Academy are now open. It is a magnet school that will offer a STEAM program focusing on science, tech, engineering, arts and math.